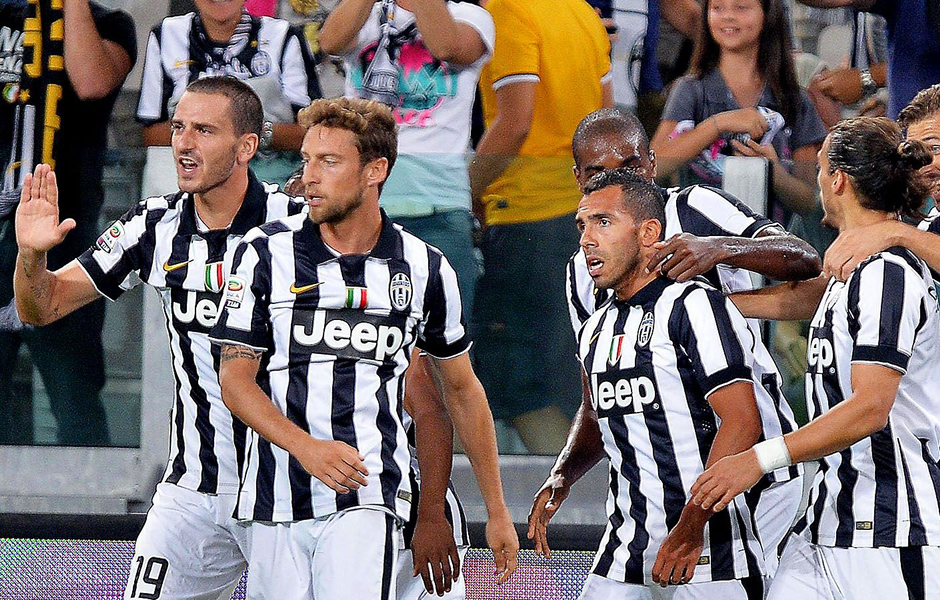 Massimiliano Allegri got off to a winning start at the Juventus stadium as Juve ended up beating Udinese 2-0 on the night. Three points along with another clean sheet was achieved, despite missing key players due to injuries and suspensions.

Another bright start by us during the game as we took the lead within ten minutes through Carlos Tevez after he latched onto a cross from Stephan Lichtsteiner to open his scoring account for this season. However, we were unable to extend the lead for most of the game and we were almost paid for being very inefficient. Igor Bubnjic tapped in to score after we failed to clear our lines from a set piece, only to be saved by the linesman as the Zebrette defender was clearly offside. However, Claudio Marchisio delivered another strong performance as he netted the second goal to put the game to bed.

Here are my 5 key takeaways from our this season’s home debut:

This was one of the most impressive aspects of our strikers under Antonio Conte. Like the last three seasons, Tevez and Fernando Llorente worked extremely hard to contribute defensively. Under Allegri this is more beneficial to them considering the fact that we press further up the pitch. The three man back line of Udinese struggled to cope up with the continuous pressure put by Llorente and Tevez. The defenders found it harder to help in ball retention and ball distribution. One of the primary reasons for Andrea Stramaccioni to bring off Lucas Muriel for Bruno Fernandes in order to hold the ball better. Offensively, Llorente caused them a lot of problems offensively by using his physical supremacy while Tevez was menacing with his agility and decision making in the final third. Apart from scoring, the 30-year-old Argentine also provided an assist.

Key Stat: Tevez and Llorente spent 33.68% of their total time in the game at midfield.

It occurred against Chievo Verona on match day 1 and it occurred against Udine-based-side as well. We need to start making our chances count. We are certain to come up against better opponents in Europe and on some occasions it can be decisive in the league as well. While it is a good thing that we are creating those chances, but in order to put the game to bed, we need to take them and relieve our defenders from any sort of stress that could exist otherwise. However, it is positive that our strikers as well as midfielders are getting into goal scoring positions.

Key Stat: Juventus have the fifth least chance to goal ratio in the first two games. Out of thirty three chances created, only three goals have been scored.

This was a game that made us realize about the strength of our squad. Without Arturo Vidal and Andrea Pirlo, the central midfield combination of Marchisio, Paul Pogba and Roberto Pereyra, bossed the game. Marchisio netted the second goal while Pereyra produced a bright performance. On the flanks, Lichtsteiner and Patrice Evra did really well. In fact Allegri went one step ahead to introduce an element of unpredictability to this side. In the opening two games he has proven that without Pirlo, we can not only control the tempo of the game but also create goal scoring chances. No single mortal can replace the 35-year-old Maestro but in two games this team has proven that with the right amount of contribution collectively, we have a backup plan in games that Il Professor is missing.

Another notable aspect about the midfield is the way they combined. The chemistry between the midfielders was supreme not only on the ball but also off it. They were brilliant considering the fact that this was the first game that they started together. They defended as a collective unit and bonded beautifully with other when we attacked. Pereyra was the surprise package of the game as he started his first game for the Bianconeri. Stepping in for Vidal, he shocked us all for ever criticizing him blindly. He also popped up in goal scoring positions and provided support to the side defensively. He played a major role in the buildup to the opening goal. Evra made a very good debut. He was defensively solid but was inaccurate in his final pass offensively. However, his understanding with Pogba was noteworthy as the latter often brought the 33-year-old into threatening positions in the final third. Overall, the midfield maintained a high intensity throughout the game.

Key Stat: Marchisio has made the second most passes in the Serie A until this stage with 175 passes at an accuracy of 90%. Only Gokhan Inler has made more passes.

Second clean sheet in a row without Andrea Barzagli or Giorgio Chiellini. All the three defenders were very good against the Zebrette. Martin Caceres in one of the most under-rated defenders in the world. He is worthy enough to start for any top team across Europe. Much like last season, he has risen once again when one of our starting defenders were missing. He picked up from where he left off against the Crociati. Apart from his ability to make crucial interceptions, he also distributed the ball really well.

The likes of Leonardo Bonucci and Angelo Ogbonna had decent performances as well. As usual, both of them were very effective in ball retention under pressure and did well in bringing other players into play. At times, Ogbonna and Caceres pressed very high but to maximum use. While Ogbonna and Caceres pushing forward can be an area of vulnerability associated to our tactic but it is very rare that we will succumb to it as the midfield is able to ensure that their challengers have very less time on the ball to exploit. The three of them did really well to keep Antonio Di Natale and Muriel quiet forcing the Udinese coach to bring off the latter. Starting together for the second game in a row, the three of them demonstrated high levels of concentration and bonding making sure that our custodian, Gianluigi Buffon is kept inactive for most of the game.

Key Stat: Buffon made only one save throughout the entire game.

Much like the game away at the Bentegodi, we opened the scoring within ten minutes. This was something that the Udinese tactician spoke about in his post match interview. We put the visitors on the back foot as soon as the whistle was blown to begin the game. Not only did we cause problems tactically but also destroyed the mentality of the eleven players facing against us. Scoring the goal early elevated the confidence of our players while depleted theirs. One of the big impressions that Allegri has made on me by choosing to come out dominating with a plan from the kickoff.

We had intended to contain a strong start by Juventus. Starting well is their main characteristic above all when they play at home. However, they still did well to make most of our errors to open the scoring. We lost our way after that. Juventus played a great first half and probably deserved to be leading more than a single goal.

They always start strong. In the opening twenty minutes, they are almost unstoppable. The only way to counter the strength of Juventus is to take the initiative and dominance away from them. In this way, they suffer without the ball.

Key Stat: Juventus players spent 68.47% of their time in the opponents half during the first ten minutes.

1. All the statistics have been taken from Squawka, FourFour Two and WhoScored.