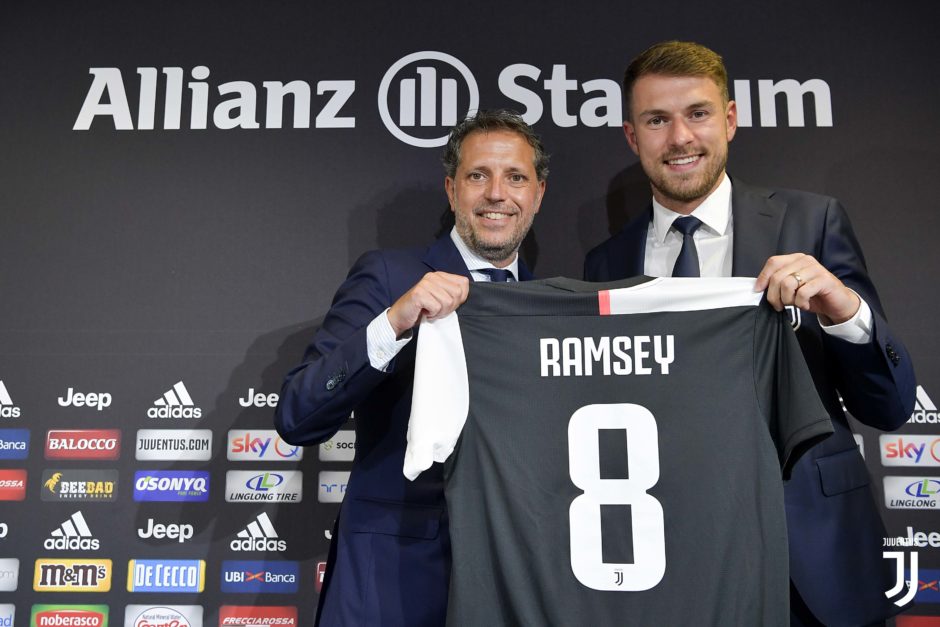 Aaron Ramsey has confirmed that despite offers from other European clubs, he couldn’t refuse Juventus.

The Welsh midfielder was confirmed as a Juventus player some time ago and had his official presentation to the media earlier today.

“I have an injury, but it’s going well, it’s progressing nicely at the moment. I’m doing a lot of work to try and get back as quickly as possible. I’m not quite there yet to go into full training, but I’m not too far away. I want to start training with the guys as soon as possible.

“I’ve had a small injury, but we’re taking it day by day, I’m feeling stronger and getting more fitness. We’ll make a decision over the next few days, but nothing has been set in stone yet over whether I travel with the squad for the pre-season tour. The way things are going, I’m confident I’ll be back fairly soon.

“Why Juve? When I knew that Juventus were interested, I couldn’t say refuse that. It’s a great club, one of the biggest in the world, so to have the opportunity to come here and play for them at the top level is a dream. It’s also a challenge for myself to come over, to experience a different way of life, different culture, for me to take that in, embrace it and I hope it all goes well here.

“I know how hard it’s going to be, I’ve prepared myself for that and I’m looking forward to the challenge.

“As soon as I knew Juve were in for me, there was no question on where I was going to go. You can’t turn down that opportunity. I’m so excited to be here, to be a part of this great club and hope I can be a part of some new history we can write together.

“Yes, there were other clubs, but this is the right club for me and I’m so excited and proud to be here.

“I wanted the Number 8 jersey that I wore at Arsenal and when it was free here, I had to take it with both hands. I know Marchisio was an unbelievable player here who grew up here and had a fantastic career. I spoke to him a couple of times and if I can emulate what he’s done for Juventus, I’d be pretty proud of that.

“I’m looking forward to wearing that jersey, I know it comes with responsibilities, but I’m ready for that too.

“The squad, the players have all welcomed me really nicely, I’ve spoken to the Coach a few times and he’s very approachable and easy to talk to. I’m looking forward to helping my new teammates to achieve our targets this season.

“There is competition for places, but that’s to be expected at a team like Juventus. I have to back myself and produce in order to get into this team, so I’m just looking forward to the challenge and hopefully can play my part.

“A player like me, I want to affect the game, whether I score or assist, both are equally important to help the team. I’ll be hoping to score and create as many goals as I can this season, in order to achieve our targets.

“Of course, you want to play football the best you can, but it’s not the only way to win a football game. At the end of the day, it’s about winning, so that’s the most important thing. If you can win by playing good football, that’s a nice feeling.

“I know from this Coach and his time in England that he definitely likes to play football, he has his own philosophy and I’m sure all the players here will adapt very nicely to that.

“From what I saw last season, he got to two Finals, won one of them and finished in the top four. That’s not easy to do, so it was definitely a success for him there. Hopefully he can bring his philosophy and style to the team, as winning and playing good football is the ideal situation, but it’s not the only way.

“Hopefully this will be something we can do and be really successful doing.

“I like to be a box-to-box midfielder, who can get up and down the pitch, who can defend and also then get on the end of something at the other end. Those are my characteristics, then when I go into full training, I’ll understand what the Coach wants too. I’m looking forward to it.

“John Charles? He’s an absolute legend, who I look up to as a person and a player, and hopefully look to emulate.