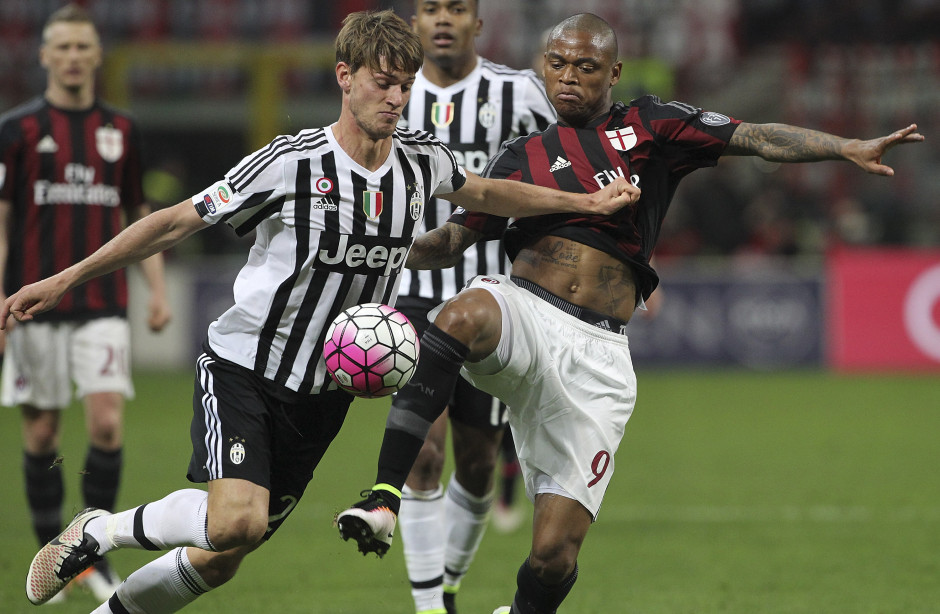 I had suspected we would face a sterner test than league positions and recent results would suggest. For games against AC Milan are always something separate, beyond and apart from the general run of the league campaign. A different kind of honour is at stake, something noble, proud and majestic, for if there are two classic pillars of Italian football they are found in the ranks and history of these two clubs.

Whilst it was pleasing to welcome back Sandro, and also to see Rugani given his third start on the trot, I was less than convinced of the value of shoe-horning Pogba into the CMR role, when his best work has long been found in the opposite channel. The system we have most commonly deployed demands a different set of duties for that particular role, for our formation is never symmetrical. It is slanted. Much like Vidal, Khedira and Sturaro can both naturally adopt a box to box role, with a greater (or equal) emphasis on the defensive phase than the offensive stage of the game. Both are adept at screening the defence, with the German equally comfortable supporting in the final third. Pogba, however, is not as accustomed to the role.

And so it was Asamoah charged with the Pogba position, and the Frenchman asked to masquerade as Big Sami.

Asamoah, back from the dead, yet needs time to fully revive…

The game started at a lively pace. The hosts clearly setting their stall out to meet us thrust for thrust, jab for jab, Alex fouling Morata every 30 seconds, Pogba well marshaled and out of sorts. Neither side was in true ascendancy. Still, after a few early scares it came as no major surprise when Milan took the lead through a Balotelli corner plundered into the net for 1-0 by Alex. The marking was non existent with several Juve players flocking around Bacca at the near post leaving the Brazilian veteran free to head home. There had been warning signs of the danger of much maligned Balotelli, for Buffon had earlier saved a splendid free kick from the striker. I was increasingly impressed with Mario. His swift probing and flair remain potent, as does his pace.

Rather than let our heads drop, we continued to try piece together quality moving up the field. Lichsteiner found space and produced a half decent shot on goal. Marchisio also let fly from range. Remarkably, it was Buffon who produced the long ball from his own half which led to the equaliser. Mandzukic won the aerial battle, knocked the ball down to Morata who returned the pass which the giant Croatian despatched past the youngster between the sticks. Before the ref blew for half time, Lichsteiner again found good space in the box, yet his effort on goal was lame.

Early in the second period we were reminded as to why Buffon is rightfully considered a true legend of the game, assuredly on par with the best of all time. Bacca found space in the box, drove a strong shot towards goal which was superbly parried by Buffon, Balotelli on hand to apply the finish and yet from point blank range, Santo Buffon tipped the ball up and away to safety. The double save was truly remarkable. A superhuman feat.

We were growing in confidence. Our superior fitness or perhaps confidence driving the balance in our favour. A flurry of bookings for the home side coincided with Pogba finally hitting his stride. Finding himself in the 6 yard box, the ball had to be hit at an awkward angle, yet King Paul prevailed, bouncing the ball off the ground and over the despairing Donnarumma for 1-2.

After which the home side lost heart, the wind was knocked out of their sails.

Outstanding. Santo Buffon won us the game with a series of impossible saves.

Buffon – In immense form throughout. In fact without his expertise we would have drawn or lost. Saves from Balotelli, Bacca and commanding his box kept us in the game. At 38 years of age, Buffon remains world class. 9

Barzagli – Strangely subdued, yet came to life in the second half as did many of his comrades. 6

Bonucci – As with Barzagli, Big Leo failed to defend as resolutely as we have come to expect. No major mistakes, yet lacking the fierce drive which makes him an uncomfortable opponent for all who find themselves in his path. 6

Rugani – Given the pressure and spectacle, the youngster did well enough. He continues to pass through the rites of passage comfortably, if not always impressively. Did the simple things carefully and covered, tackled and intercepted as well as any other in the rear-guard. 6.5

Lichsteiner – Another who seemed lethargic, yet the Swiss Locomotive found several promising positions and was solid on the flank. Managed to suppress the normally more adventurous Bonaventura. 6.5

Sandro – I enjoy the brazilian more every time I see him play. Clearly missed Pogba in close attendance, yet stuck to his task, defended resolutely and bombed forward with zeal time and time again. His ball control is splendid as is his pace. 7

Marchisio – Quiet, yet worked damn hard as always screening the defence and attempting to keep the ball moving quickly and intelligently. Until he has a run of games without injury we are unlikely to see his best. 6.5

Pogba – A game of two contrasting halves for the gallic prince.  Off the pace in the first 45, struggled to make any meaningful impact, other than a top drawer free kick which hit the post. Clearly collected his thoughts during the interval and emerged a different beast. Began to impose himself as the opponents tired of double and sometimes triple marking him. And once he found more space, it was only a matter of time before he made his technical superiority count. Well taken goal, superb second period showing. We need him to play in such a way for 90 minutes though, not 40. 7.5

Asamoah – After such a brilliant cameo against Empoli I was very much disappointed with the Ghanaian. Perhaps he was trying too hard? Running into dead-ends, losing the ball, his effort and eagerness not yet matched by his sharpness on the ball, which is to be expected of a player who has barely played this season. Great to have him back in the ranks and available, and I know he will come good soon enough. 5.5

Mandzukic – Took his goal smartly, toiled hard and was facing too many foes to conjure any other meaningful opportunities. Finally we saw some decent link-up play between the Croatian and the Spaniard! 6.5

Morata – Battered, tactically, by Alex until he earned a yellow card. Found it very tricky indeed to turn and explode with lightning pace and menace, as his minder was always supported by fellow henchmen blocking a path to open space. Worked himself into the ground, though never truly sparked into life. Smart enough to assist the goal. 6.5

Zaza – Earned his trademark yellow card, other than which offered nothing of value other than appearing aesthetically a cousin to Alex. 5.5

Aside from the two goals we scored and the manner in which we took control of the game after taking the lead, it must be said that Buffon was by far the busier keeper. In fact, he was the difference more than any other in black and white. Milan were impressive. And we were not far shy of lackadaisical – albeit in patches – for much of the first half.

Balotelli, despite suffering from obvious fatigue, displayed more technical ability and flair than I have seen in any of those chosen by Conte as the attacking options for the EUROs. It is a shame, in many ways, that Il Mister is so pig-headed, for even a barely half fit Balotelli troubled our defence more than most others of his ilk have managed this season. He has astonishing talent. And I can but still hope against reality and my conclusion of Conte, that he will make the cut for France. I believe we need him.

A throw-back to the times of carefully uncompromising stoppers! As much as I was bothered by Alex, I admired his cunning.

I was also impressed with Alex. Reminded me of Cannavaro, who was a cultured thug of the highest calibre in his heyday. Sinisa clearly set out his tactics to stifle and stride forward with Mario as the fulcrum of creativity. Our key creators of Pogba and Morata found very little space in the first 50 minutes. It was not until their markers tired that we began to impose ourselves. Yet still only managed a slender victory.

We did enough to warrant the 3 points, which is what matters most. Played our part in an entertaining fixture and yet seem to have been struck in the process by yet more injuries. Morata’s stomach is not a serious worry,  yet Asamoah was evidently hurt. Dybala continues to attempt to remedy his muscular strain and Chiellini? Who knows when he will return. Still, Napoli have Roma and Inter to face away, whereas we have only Lazio at home and Florence away to contend with as potentially tricky ties. Our journey to the finishing line appears at least on paper, slightly less taxing.

It seemed mildly odd that Allegri opted to deploy Asamoah, moving Pogba in the process, rather than play Lemina (or Sturaro) in place of Khedira. For as we have an option to sign Lemina for 9.5m before the end of April, would it not make more sense to give the lad a chance to impress before that date? Either we are negotiating with Marseille for another loan, we have decided to buy him, or we have decided to send him home. I have not seen enough of the player to make the call. Nobody has (other than the coaches in training) due to injuries. I could not even suggest where his best position lies. Yet 9.5m for a 22 year old who has shown great form in France, has suitors elsewhere and when fit, has performed well in our colours? Seems a steal and at worst a punt unlikely to lead us astray…

I am assuming that Pogba will remain, as will Morata. With this firmly in mind I will ponder the next stage of evolution for our squad.

One of a handful of players…to be culled in the Summer.

Caceres, Zaza, Cuadrado, Hernanes and perhaps Padoin will leave. I would not be surprised to see Pereyra added to that list, yet given his season of injury, we will make a sizeable loss on his value in monetary terms.

Berardi, Saponara, Mkhitaryan, Vrsaljko, Benatia (or Tonelli) and one other, of an attacking nature.

Even assuming Pereyra will remain, as he most likely will, the other five changes will improve the squad hugely. Its up to Beppe and Fabio to make such moves, yet the signs are very positive. I have full faith in that duo.

If Lemina is sent home, we will have another space in the squad to fill. My instincts suggest he will stay put.

We have 7 games to play. The double is yet again within our grasp and bearing in mind we lost 3 established world class players last Summer, have suffered our worst series of injuries for the whole season, if we were to claim league and cup, it would be a tremendous achievement.

Next weekend’s matches at the top could well prove decisive. We have Palermo at home whilst Napoli travel to Inter. Despite Fiorentina’s wretched form, they seem unlikely to be caught by Milan or Sassuolo for the final European place. Further down…it would be interesting to see Carpi survive and Palermo once again head down, and who knows eh…perhaps Juve can thereafter reunite Vazquez with Dybala!

Juventus back in for Henrikh Mkhitaryan