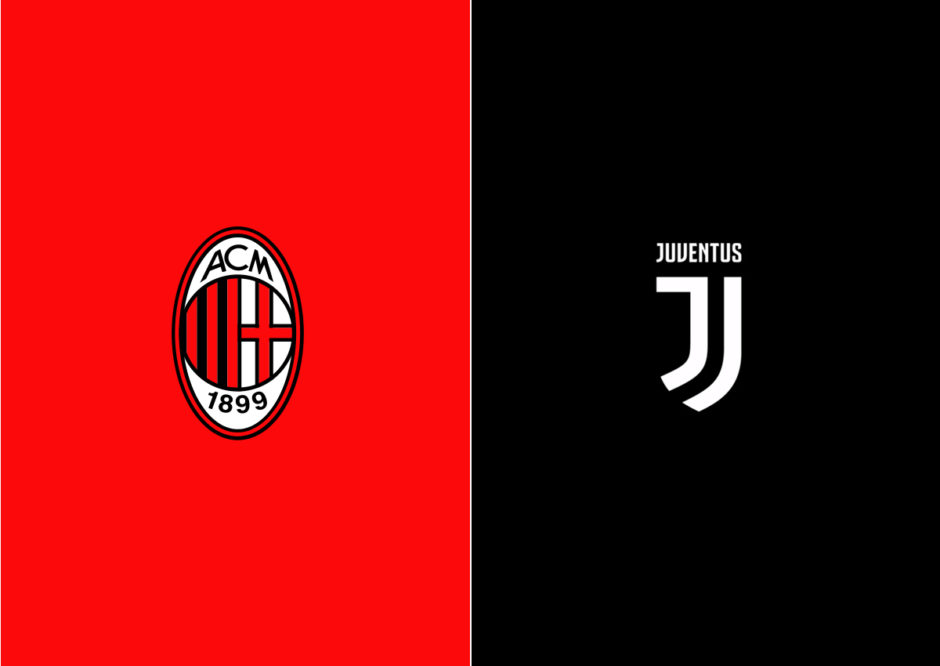 Once again Juventus won with a large result, but once again the performance was dissatisfying in few portions of the game. Against SPAL, it looked like we had things wrapped up after 20 minutes thanks to a wonderful volley by Federico Bernardeschi and the usual free kick by Paulo Dybala. However, yet another defensive blunder re-opened the game: this time Stephan Lichtsteiner was at fault as he guarded Alberto Paloschi poorly. The start of the second half was ugly as the opponents gained confidence, luckily Gonzalo Higuain found the third goal at just the right time and Juan Cuadrado sealed the deal few minutes later.

Everybody won at the top of the standings, so nothing changed there. Next up is Milan on a Saturday late afternoon game. Last year the Rossoneri beat us with a stunner by Manuel Locatelli in the league title and was victorious in the Supercup, so besides keeping up with Napoli and Inter, the revenge factor comes into play in this. The Bianconeri had won in the previous three trips to San Siro.

Mario Mandzukic returns from suspension, while Blaise Matuidi and Stefano Sturaro are in the squad list after minor muscular ailments, but the will probably not start. Claudio Marchisio had a limited stint against SPAL and he looked in good shape, he even had an excellent through ball to set up Higuain, but the goal was disallowed via a VAR review. Mattia De Sciglio was on the bench, Sami Khedira has been balling out there, so after few tough weeks some pieces are coming back from injuries, allowing Massimiliano Allegri to rotate the squad. Medhi Benatia and Benedikt Howedes remain sidelined.

After using the exciting Bernardeschi-Douglas Costa combo midweek, Allegri will revert to what he believes to be the A-team offensively, featuring Cuadrado and Mandzukic on the flanks. Lichtsteiner will play on the right, while the coach hinted that Kwadwo Asamoah will be given a chance on the left. The most interesting choice will be in the heart of the defence, where Giorgio Chiellini will be in the XI. We have won 29 out of 30 matches when Daniele Rugani started, but Allegri has usually relied on the experience of Andrea Barzagli in big matches. Gianluigi Buffon will reclaim his spot.

There is a small chance we will see a three-man midfield and that hinges on Matuidi’s recovery because Marchisio is not ready for a full game and Rodrigo Bentancur is a weird fit next to Miralem Pjanic. Anyway, the Bosnian will start after resting a little bit and Khedira is his most likely partner. Despite the rumours, the frontline is expected to be the same four-headed monster as always.

Milan have had a number of problems at the beginning of the season. They have brought in several new players, so a few hiccups were to be expected, but their issues went beyond some chemistry and gelling issues, which only time can solve. Vincenzo Montella took a while to get where he needed to get, scheming-wise: a 3-4-2-1, where he can showcase all his best players at once. They have dropped some points along their tactical journey.

It is undoubted that some of the big-ticket acquisitions have struggled: Leonardo Bonucci has not been himself with the Rossoneri and fell back into the same mistakes he was plagued by when he first joined Juventus. Lucas Biglia has also been more up and down than expected and Hakan Calhanoglu maybe has not made that big of a difference as they hoped, but he was coming off a long stretch without playing because of a FIFA-mandated suspension. It is probably only a matter of time before they put everything together and start looking as a top team and the commanding win against Chievo Verona was a step in the right direction. However, Serie A waits for nobody and their gap compared to the Champions League spots is already significant, so they would have to go on a run very soon if they hope to compete for those till the end.

Their defence has let them down so far and some mental mistakes cost them goals and points. The three-man back-line has not been a net positive, but Montella wants to stick it. Bonucci will miss this game because of a two-game disqualification following an elbow strike, but he is not their only absence, so putting together a quality XI will be a little bit of a challenge for the coach.

Giacomo Bonaventura is out with a hamstring issue, so their five-star lineup is not on the table. Davide Calabria suffered a blow to the head in the last game and will need to rest for a week. Luca Antonelli has been out of action for a while. Therefore, they have two options on the left: advancing Ricardo Rodriguez, who has featured as left centre-back in the last two matches, and putting Cristian Zapata back there, or moving the versatile Fabio Borini to the other wing and inserting Ignazio Abate on the right. The former Sunderland man has been a jack-of-all-trades and his steady play as a wingback helped them mitigate the absence of Andrea Conti. I would consider the second option the lesser of the two evils, but the first one is reportedly the favourite. Alessio Romagnoli will anchor the defence and there is a chance Mateo Musacchio is benched, allowing Zapata and Abate to both start.

Biglia is a little fatigued, but I doubt he will miss a fixture of this magnitude only for that reason. The alternatives are Riccardo Montolivo and Andrea Locatelli. Frank Kessie will be his partner. Suso and Calhanoglu will form the very dangerous duo of no.10s. The Spaniard is more at ease when he can play a little moved to the right, while the Turk is more comfortable as attacking midfielder than as a box-to-box or as a winger, so this is a compromise that helps them both, even though I think that 4-2-3-1 might be even better for everybody involved. Their combination of shooting and passing ability pose a big threat. Nikola Kalinic will be the lone striker, as André Silva has not managed to push him for minutes in the biggest games. The youngster Patrick Cutrone always provides a spark when called upon.

Their defence has not been good and at times they appeared to have a glass jaw and crumbled at the first sign of adversity, however the performance in the Milan derby was a good sign in this regard even though they came up short. There is no shortage of classy players in their lineup, so they can create a chance out of nowhere in any minute, but they do not have a big physical presence, so this is were Juventus can maybe gain an advantage. 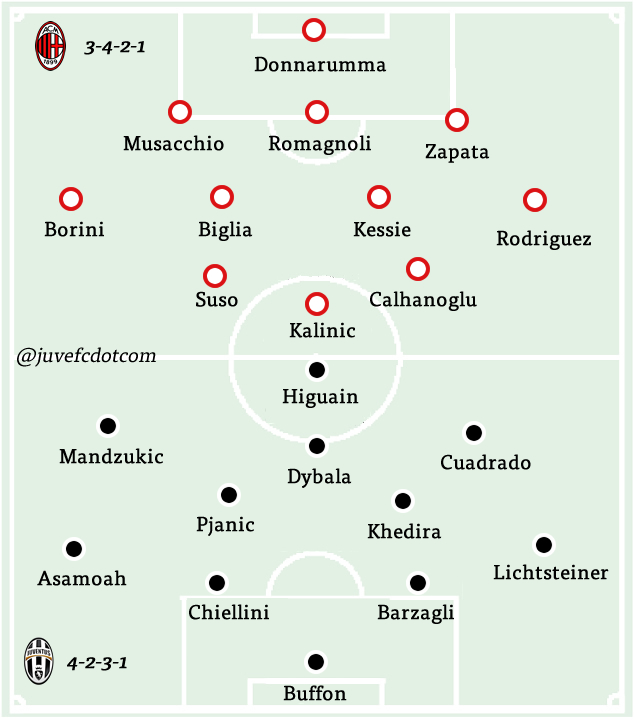