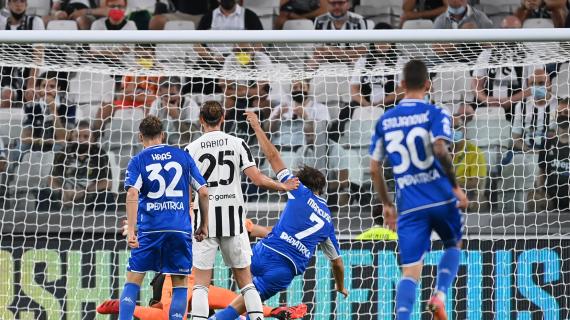 Allegri blames a lack of teamwork on Empoli defeat

Max Allegri has claimed that his Juventus players lacked cohesion in their bid to beat Empoli yesterday.

The Old Lady were downed 1-0 at the hands of the Azzurri yesterday, in a performance that didn’t really warrant anything more, meaning that we will now head into the international break with just the one point from our opening two fixtures.

The manager insists that we did start the match in good stead, but they stopped working together as they chased the result.

“We started off well but conceded from our first mistake then stopped playing as a team, handing space and the initiative to Empoli,” Allegri said after the final whistle(via Juventus.com).

“We should have played as team, not individually. We needed to fill the box better but we made lots of technical errors because our play became frenetic.

“You have to manage the game and the ball differently and you have to be patient when defending, because if you rush around trying to win back possession you leave gaps for the opposition.”

Our side was definitely struggling for ideas, and there was little understanding when trying to find and create gaps in the defence, while some players opted to tried to take a chance on their own, which is what the manager must mean.

It was a painful watch seeing our players working alone, and there is definitely work to do to fix our issues in the coming weeks.