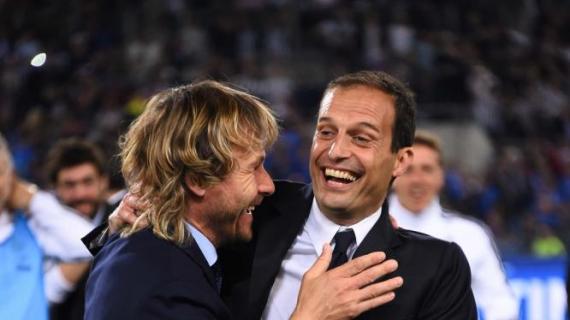 Allegri vs Nedved: Is the stage set for another duel?

When Juventus sent Massimiliano Allegri packing in 2019, former sporting director Fabio Paratici and vice-president Pavel Nedved were considered as the main masterminds behind the coup.

The former Cagliari and Milan manager eventually made his return to Turin last summer. But while Paratici departed to North London, the Czech remains at the club, which left observers to wonder how he and the returning manager would get along.

As a club icon, the latter remains very popular amongst the fans. But aside from his recurring angry reaction in the stands, it remains unclear what his actual role is and how much power he truly wields when it comes to decision making.

Following the Coppa Italia final defeat, the vice-president lashed out on the players in the locker-room for their alleged lack of effort throughout the campaign.

While his fury was directed towards the players, Nedved was perhaps sending a message for Allegri. The fans’ wrath towards the coach’s unprogressive style of football has been growing recently, and the Czech might be the one leading the charge from the inside.

But whatever feelings of resentment between the men, the last thing Juventus need is another internal conflict between two of the club’s highest ranked officers.

Lazio boss opening the door for Juventus to sign midfielder

The Probable formations ahead of Juventus-Lazio