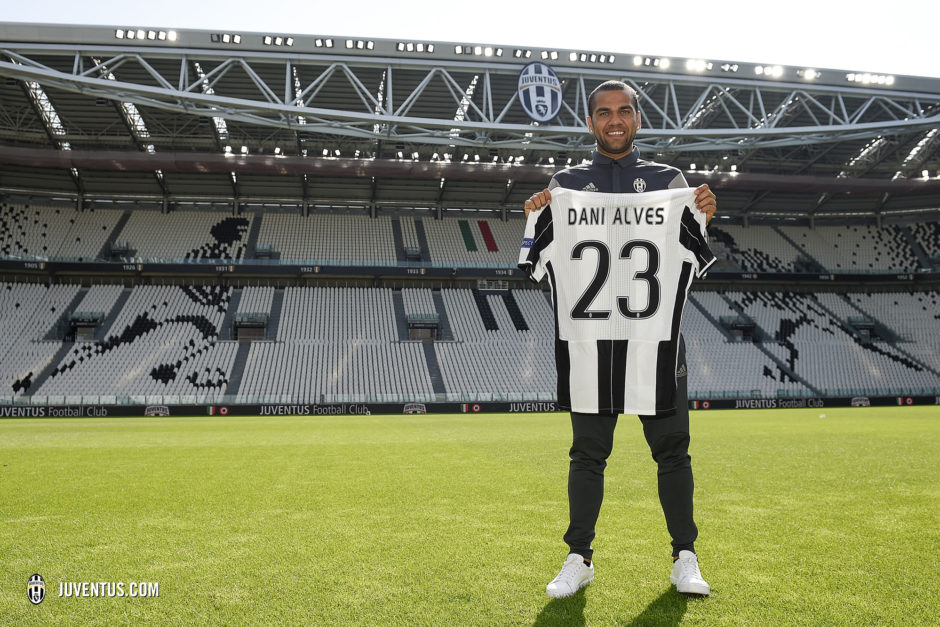 Dani Alves gave his first interview as a Juventus player and spoke of his ambitions for the club, namely winning the Champions League.

Having confirmed the signing yesterday, Juventus unveiled the player earlier today with a lenghty presentation and press conference.

“It’s a real honour to be here and to join this team. I chose Juve because I love to dream, and I love to dream with great teams and great players.” Alves told the gathered press.

“I think Juve have a great dream, which I want to share and help accomplish. I know Juve haven’t won a Champions League in a long time and that they want to win it again as soon as possible.

“They’ve been the leaders in Italy for very long and they want to triumph in Europe too. They have some very important players and a great history. I like teams like that and I want to be part of that history.

“I think this will be a really interesting experience, what with living in a different country and discovering a new type of football that I don’t know. That’s why I chose this adventure.

“I want to share my dream with all of you and I want to reach the common objective.”

When asked which shirt he’d be wearing, Alves revealed the reasons behind his choice.

“I chose #23, after LeBron James, who is a player who doesn’t rest on his laurels but always reinvents himself, always finds new records to be beaten.

“It’s a number that makes me feel the same thing, as I come to a new country and a new team and have to reinvent myself.”

“I think he’s an important element of the team and a really great player. I expect to play alongside him, which is going to be a great honour.

“There are other incredible players in this team as well, who also have a lot to say for themselves. I’m truly delighted to share this experience with them.

“A team is formed up of individuals, and it’s when they come together that you can achieve results. We are all going to be important, and sharing this year with them is going to be a privilege.

“We must approach things with a sense of fun alongside that of responsibility and level-headedness. After all, that’s what we’re here for, and you need that in order to reach your objectives.

“Dybala? I’m certainly here to lend him and everybody else a hand. If I can get him and everyone to score many goals, that’ll be my pleasure. I’ll do everything I can to make that happen.

“Strikers are happy only when they manage to score, while I’m happier when I can bring others to do that. So it’s going to be a perfect pairing!

“We know the Champions League is a tough objective and so is the tournament. We’ll have to work hard, and we most certainly will.

“We’ll make sure this team can make history again, as it’s been too long. I’ll do my best, I’ve come here to do what I can according to my qualities and my characteristics. I want to make the fans happy and give them the great joy of the Champions League.”

“I honestly don’t think about these things. I’m here to live day by day and I don’t want the obsession of such a heavy historical record. It’s not important to try and break these figures.

“Javier Mascherano? I have a great relationship with him and playing with him again would be an honour, but it’s not down to me.”

Alves was asked what was missing from the Juve setup thats prevented them from winning the Champions League in previous seasons.

“To be perfectly honest I can’t answer that, as I wasn’t here and I’ll only be able to develop an opinion later on. Let’s find out with my teammates what’s missing on a European level.

“It’s most certainly an important competition. It’s not enough to have good players, you need the right appraoch. There’s certainly been something missing, but we’ll try finding out what that is so that we can show our worth.

“Juve are a team that want to reinvent themselves, which is the same thing I want for myself. Normally Italian football is represented internationally only by the Old Lady, so this is a unique opportunity for me to be part of this type of football.

“This is what I’m aiming for, to find new challenges rather than to rest on my laurels, and I’d like to thank Juve for giving me this opportunity.

“I’m sure we’ll have great fun, because as far as I know everyone here is a great professional. I’d like you to know that I don’t think of myself as a football star, I am a worker, who trains hard and gives his best.”

Alves has already met up with Juve Coach, Max Allegri.

“I had a chat with him but we haven’t really explored what he expects of me. When a team signs you that’s because of your individual qualities and one of the most remarkable things about Juventus is how closely they study the players they mean to sign.

“They don’t just look for the qualities alone but also for the way they’ll fit into the team. They study their players very closely and I appreciate that.

“There were many teams that were interested but this is what convinced me. If they chose me, it means they believe I’m worth it.”