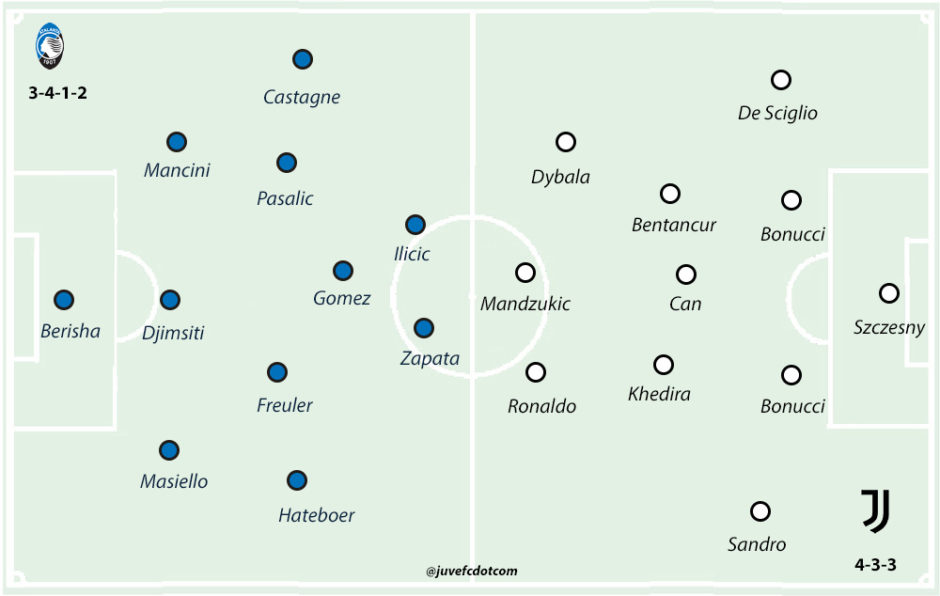 Cristiano Ronaldo salvaged a point for Juventus in Bergamo in a thrilling 2-2 draw against Atalanta which also saw Rorigo Bentancur red carded.

Wojciech Szczęsny: His defence did him no favours on Zapata’s opener and you could say the same on second goal as well where the defenders looked woefully disorganised. Aside from the, he was on the ball making four saves and generally commanding the area a little better. 7.0/10

Giorgio Chiellini: A performance more built around having to control the defence himself and clean up after others made mistakes around him. Three tackles and two aerials won doesn’t really tell the tale of his attempt to single-handedly keep Atalanta at bay . 7.0/10

Leonardo Bonucci: Abject – Utterly abject. This was not the player who joined Milan two years ago. He looked in trouble from the start and while his passing out from the back makes a big contribution, his defence wiles seem to have all but disappeared. He was easily brushed aside by Zapata for the opening goal and made a series of mistakes that could have cost the team. At this point, I think Benatia deserves to be back in the XI. 4.0/10

Mattia De Sciglio: Another game where very little was getting past him. His positioning and awareness have come on leaps and bounds and while he can’t always offer what Cancelo does in an attacking sense, his defence work is second to none. 7.0/10

Alex Sandro: Another solid display from the full-back who all of a sudden looks far more committed to the cause. Five tackles, two interceptions, two clearances, one aerial challenge. He put in a shift and prior to Juve going down to 10 men, he was getting plenty of joy down the left. 7.0/10

Rodrigo Bentancur: It’s been coming. His passing, positioning, work-rate….so much of this can’t be faulted, but his tackling at times is woeful. The yellow cards had stacked up and while he hasn’t played as many minutes as some other midfielders, he’s had way more bookings. An argument could be made that one of the yellow cards was a little harsh but the whole point of being booked is that you’ve been warned – He totally ignored that and continued to play recklessly in a massive game. A lesson to be learned. 3.5/10

Emre Can: Playing in the place of Pjanic, he looked shaky to start with and while there wasn’t as much offered in an attacking sense, he looked tidy at the back. A shame that he didn’t mark Zapata closer for Atalanta’s second goal but he was good aside from that. 6.0/10

Sami Khedira: It’s gotten to the point where i have no idea what he contributes on the pitch. Barely a touch on the ball and nothing offered in attack at all (or in defence). I struggle to understand why we renewed his contract for longer when he’s so clearly a liability. 4.0/10

Mario Mandzukic: Left alone up top with little to no service and he was expected to win the game for us? Still managed to make a huge contribution by providing the assist for Ronaldo’s equaliser. A titan. 6.5/10

Douglas Costa: Given the opportunity to start and it’s hard to justify. Granted, he may be lacking game time and playing in cameo showings doesn’t help him find consistency, but there was so little on offer by way of attacking intent. Must do better. 5.0/10

Paulo Dybala: Some important passes and he is trying to be the playmaker, but does it really work? I still feel he is utterly wasted in this new role and ultimately his goal-scoring suffers as a result of playing so deep. 6.0/10

Miralem Pjanic: Helped bring some stability to the side after Bentancur’s sending off. 6.0/10

Cristiano Ronaldo: You could see he was itching to get on the pitch and he duly turned the game on it’s head with a brilliantly taken goal to snatch a point for Juventus. Superb. 7.0/10