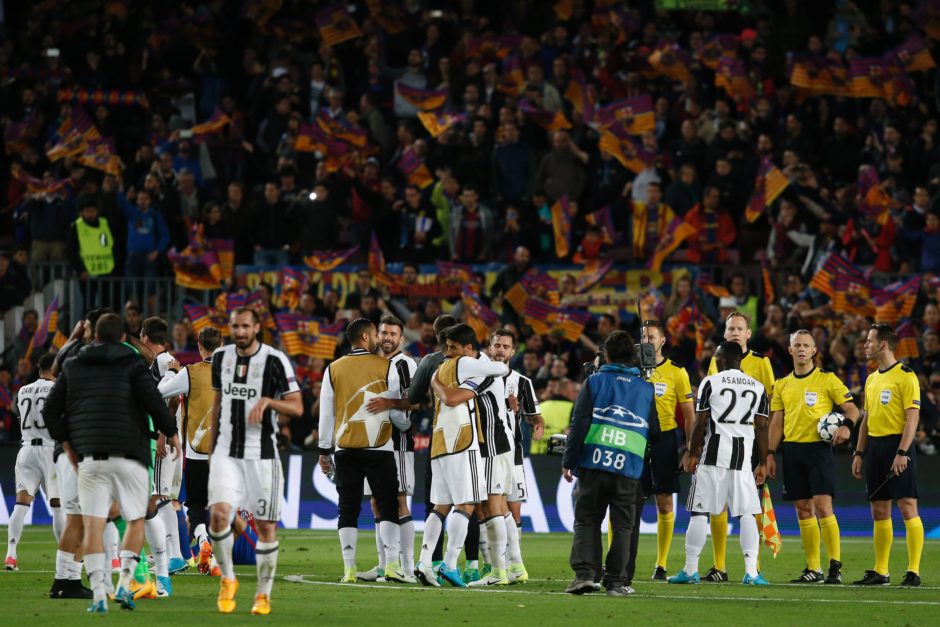 Barcelona had their chances but the Juventus defence made the difference in a 0-0 draw that takes the Bianconeri through to the Champions League semi-finals. 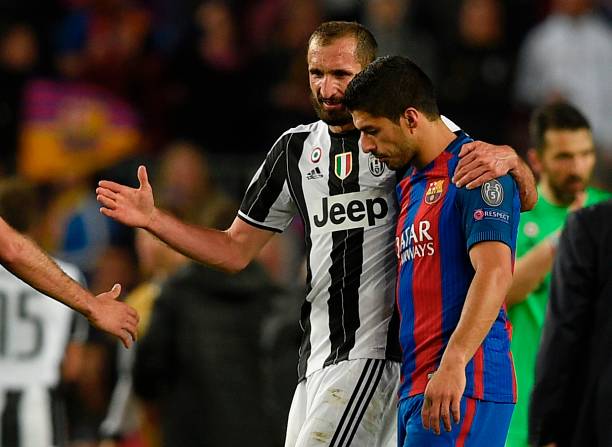 BUFFON: Had to be on his toes all night as Barca had good periods of pressure. One brief lapse in concentration aside, he was in command of his box, vocal in conducting the defence and kept the back line working in harmony.  7.0

DANI ALVES: Started well but wasn’t as tight on Neymar as in the first leg – Beaten by his compatriot on a few occasions down the flanks and in front of the box. Linked play really well with Cuadrado to provide Juve with an outlet down the right. Stayed in his own half for much of the night, which was only to be expected, as Barcelona focused most of their attack down the right . Solid.  6.5

BONUCCI: It was difficult to improve on the display in Turin – But then ‘difficult’ isn’t in Leo Bonucci’s vocabulary. When he and Chiellini play to this sort of level, it’s hard to find a better pairing in football….anywhere. His reading of the game, and more importantly, his positioning and awareness is second to none. Made some truly vital interceptions and restricted Suarez to a cameo role for the entire 90 minutes. This certainly wasn’t catenaccio,  it was something else altogether – A rough-and-tumble defensive masterclass, ably assisted by Chiello.  10 Clearances, 5 Tackles and 4 Interceptions. A defensive colossus.  9.0

CHIELLINI: Much like his teammate, he barely put a foot wrong. Alert and aware throughout, marking Suarez, breaking up play and covering for his partner when needed. If it wasn’t Bonucci, it was Chiellini, and if it wasn’t Chiellini, it was Bonucci. Always alert to any and every threat – When Barcelona lofted crosses into the box, it was Chiellini who cleared. When they played those perfect, precise passes, it was Chiellini who intercepted. He’s enjoying a renaissance of sorts, and what a joy it is to watch. 9.0

ALEX SANDRO: Given that Messi would be Barca’s main threat, Sandro was restricted to a more defensive role this time around. It’s a testament to how much he’s improved in his defensive duties that Leo was relatively quiet for most of the night. His understanding with Mandzukic is improving and they provide the perfect duo on the left.  7.0

PJANIC: ‘Outstanding’ would be an understatement. Alive to the Barca threat, he worked every blade of grass in the centre of the pitch, exerting pressure when the home side was in possession. Strung together neat passes to bring the ball forward and launch counter attacks. Showed his more physical side over the course of these two matches and is ending the season in the way he started. Sublime  8.5

KHEDIRA: Had a glorious chance to score late on, which he really should have buried. On the plus side, his defensive work over the two-legs was immense. Broke up the Barca attacks, timed his tackles well, worked hard for the entire match. 7.0

CUADRADO: He may have neglected his defensive duties, but he was arguably Juve’s most potent attacking player, constantly finding possession in the final third, always looking to pass to a teammate or fire in a cross for Pipita. If he could be more direct at times and finish his chances, he could be in double digits for the season. 7.5

MANDZUKIC: It takes a level of sacrifice to move from playing as a typical ‘9’ to left-midfield. For all intents and purposes, he was a left-back-cum-left-midfielder for these two-legs, working tirelessly in the Juve box on corners. He provided a good outlet on the left, trying his best to pressure Barca when they were in possession.  6.5

DYBALA: Utterly restricted in this leg, largely due to the Barcelona midfield, who did a good job of keeping La Joya quiet. A snatched half chance and a few brief forays into the box aside, he was subdued for much of the match. 6.5

HIGUAIN: Missed 3 very good chances in the first half, any one of which would have settled Juve nerves for the remainder of the match. A frustrating figure in games like this where he gets the opportunities but fails to capitalise on them. Other than that, he did a good job at holding up play and worked hard to bring the ball out from the Juve half. 6.0