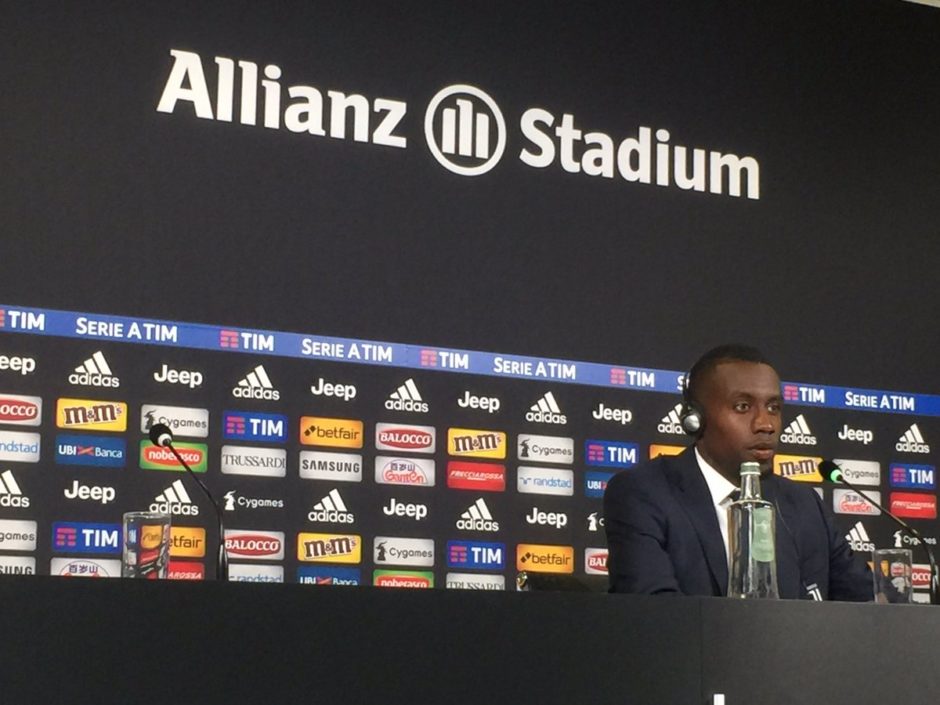 Blaise Matuidi was officially unveiled as a Juventus player today and spoke of the clubs ‘dream’ of winning the Champions League.

The Frenchman arrived last week and has already featured for the Bianconeri as a substitute in the 3-0 victory over Cagliari. Speaking at his presentation today, Matuidi reiterated the clubs desires and hopes for the season ahead.

“This is a great club with a habit of going far in the Champions League, and winning the Scudetto,” Matuidi told the press.

“For me it was natural to come to this team and wear this shirt. There are many great players who have worn this shirt and for me it’s a great honour to be part of the Juventus family.

“I never had the slightest doubt and I’m very happy to be here.

“In my opinion every team is different, every team has its own culture. I’ve come to a new country so this is a new adventure for me.

“This is a particularly ambitious challenge, I’ve come to a big club. First things first I have to adapt, but my teammates have welcomed me really well and it’ll certainly be easier when he have an understanding on and off the pitch.

“Juve have a great history, this is such an important club and it’s a huge honour for me to be here.

“Last year? I don’t want to go back over what happened in the past, there were rumours that the club was interested in me but nothing came of it.

“Maybe PSG didn’t want to let me go, but better late than never. I’m glad to be here.

“I talked to Deschamps, who is my Coach with France and that was very important for me because I received a lot of information about the club.

“It’s very important for me to change clubs, evolve in a new context and then there’s the World Cup to think about.

“I asked for some information, even if I’d already decided and he spoke really highly of Juve to me.

“The number is the one I’ve had for many years, so I have to say it’s a coincidence it’s the one Deschamps had at Juve, but he did great things here.

“When you have ambitions it’s clear that you try to win everything. It’s easy to say that, but putting it into practice isn’t easy. I’m in a team that’s used to winning, and that’ll help me to give my best an help the team achieve our goals.

“In football many things can happen, the important thing is to give everything on the pitch and be happy with what we’ve done over the season.

“I think the team has done great things so far, and we need to continue along these lines.

“Everyone dreams of winning the Champions League, but you can’t do it overnight, it’s a long-term job and there are a lot of very good teams.

“We’re one of the teams aiming for that long-awaited triumph, but at the same time Serie A is very important, it’s our bread and butter which allows us to be real Champions League contenders.

“It’s clear that there’s an ocean between saying something and doing something, but this is a club which has reached the final in the last three seasons, which means they’d been doing very important work.

“Winning the Champions League depends on a lot of factors, and a lot of top teams are trying to win it.

“It takes daily work, and as I’ve said we want to improve and add this trophy.

“Serie A is a very important, very interesting league. It’s a huge honour to be part of this team which will surely win a lot of games and hope for a lot of trophies.”

It has been suggested that the Bianconeri could move to a midfield three with Matuidi’s arrival, but the 30-year-old has no preference tactically.

“It doesn’t make a difference for me. In France I usually play in a two, in my club teams I’ve played in a three so I think both are good.

“Then of course the Coach Allegri will make his choices. In terms of tactics you’d have to ask the Coach, I’ll just try to perform regardless of the role I’m given.

“In a team each player brings his own characteristics, and I’m one of the players. It’s clear that I’ll do my utmost to get the best results with my attributes.

“Even at 30 I have the desire to improve, to do my best, and I’ll try to interpret the instructions the Coach gives to the team.

“It’s by all players making their contribution that a team gets stronger.

“I’m happy and honoured to wear this shirt, it was a choice. After so many years it’s clearly difficult to leave those colours, but I have a huge determination, a huge will to win.

“Wearing this shirt is an honour, not everyone gets this chance and I’ll try to take the opportunity I’ve been given.

“I’m very proud, if you look at all the French players who have worn this shirt they’re all great players.

“It’s a source of great pride to be part of this team, it’s a pleasure and above all the welcome I received was beautiful.

“It’s no coincidence that these players showed their best in a Juve shirt.

“I’m particularly proud to join this array of French players who have made their mark for this prestigious club.

“I’ve found a very organised club, everything is fine and I have no worries about it. In fact the welcome at every level, from players to directors has been fantastic.

“This is a great family and I’m just happy to be part of it.

“Dani Alves told me good things about this club, honestly I’ve only heard great things and I’m very honoured to be part of this family.”

Juventus to meet Genoa for Laxalt and Pellegri