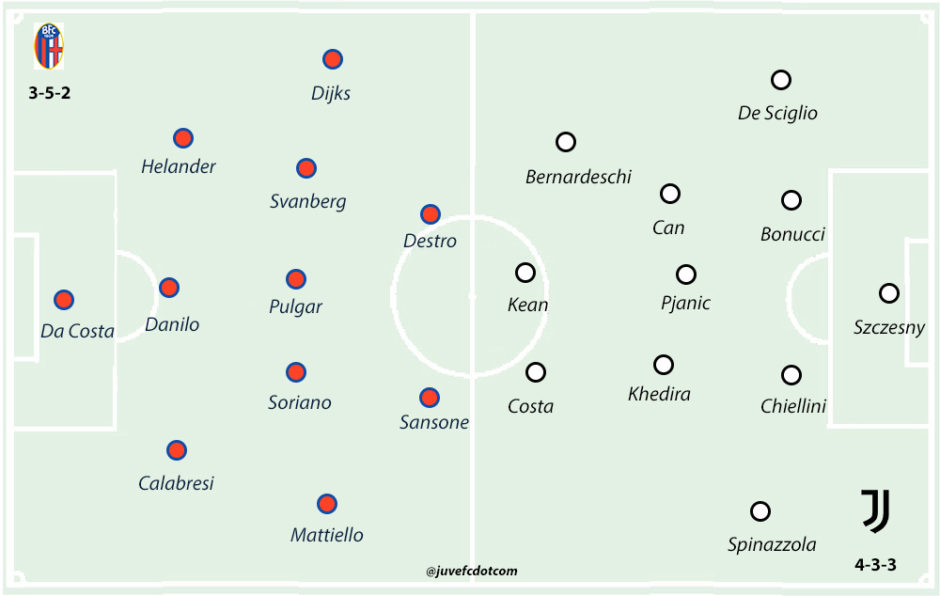 Max Allegri handed debut’s to Moise Kean and Leonardo Spinazzola as Juve secured progression to the Coppa Italia quarter-finals with a routine victory over Bologna.

Wojciech Szczęsny: A total spectator. It’s no exaggeration to say Juve could have played with 11 outfield players as he barely had a touch of the ball, such was Juve’s dominance. 6.0/10

Giorgio Chiellini: Some early mistakes from teammates bought a little pressure but from that point onwards, he had the complete measure of Destro and Sansone and was barely pressured or tested. 7.0/10

Leonardo Bonucci: Had a chance to score in the first half and he probably should have done better. At the back, he helped dictate things and kept the Bologna strikers completely under control.. 7.0/10

Mattia De Sciglio: A really shaky started where he made a series of poor passes that were either mistimed or too short, sometimes leading to interceptions from the opposition. He stepped up as the game went on and was in more control. 6.0/10

Leonardo Spinazzola: It was difficult to predict a performance of that level from a player who has missed so much of the season through injury Granted, he probably wanted to impress in his debut showing, but he was superb from start to end. His defensive work rate, his runs down the flanks, the intelligence with which he decided whether or not to cross or try a different option. Just exceptional and the man of the match for me.8.0/10

Emre Can: I liked his energy to start with as he worked hard, had a half effort from outside the box, but he still failed to leave a lasting impression of any note. 6.0/10

Miralem Pjanic: An improvement on recent months as he looked at the heart of everything Juve created. Intelligent passes, retaining possession, moving the team forward – A smart display. 7.0/10

Moise Kean: Excellent positioning throughout, really brilliant runs where he peeled off the last defender to try and break the offside trap. He held up play, bought his teammates in, moved the ball cleverly – Just a great all round display from the youngster. 7.5/10

Federico Bernardeschi: Did really well to start the game with a goal, pouncing on a mistake from Da Costa. Got the feeling he should have offered more in the attacking positions but it was a good way to start the year for him. 7.0/10

Douglas Costa: A good display, lots of smart little flicks and tricks, great entertainment….but i felt the end product was lacking. Another player who really needs a goal and more minutes to see him at his best. 6.5/10

Cristiano Ronaldo: A warm up for the SuperCoppa and little else. 6.0/10

Alex Sandro: A brief cameo for the closing 15 mins. N/A

Paulo Dybala: Much like the others, a few minutes to warm the legs. N/A