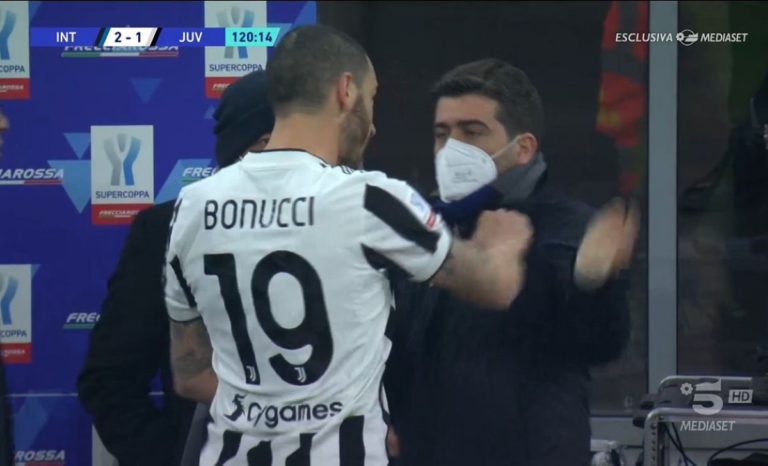 When Alexis Sanchez scored the added-time winner in the second extra-time, the Giuseppe Meazza Stadium errupted as the Inter players and fans wildly celebrated their first Italian Super Cup triumph since 2010.

But amidst all the chaos, the live broadcast turned to the touchline for very few seconds, but it was enough for the world to witness Leonardo Bonucci unleashing his anger on a Nerazzurri executive.

The Juventus defender was set to make his entrance in the final seconds of the match in order to lend a hand for his side in the anticipated penalty shootouts.

Alas, that wasn’t meant to be, as the Chilean’s goal changed the whole scenery.

So instead of entering the pitch, the Italian defender released his frustration on the man who was identified by la Gazzetta dello Sport as Cristiano Mozzillo, the first team secretary of Inter, who also held a similar role at Napoli in the past.

It’s still not clear what prompted the argument in the first place, but Bonucci was seen approaching Mozzillo with malicious intentions in mind.

Those who followed the center back’s career would know that he can be particularly short-tempered.

Perhaps Mozzillo mouthed some words that irritated the Bianconeri veteran, but in any case, Bonucci should have avoided any sort of physical alteraction with an executive.

Let’s hope that he somehow avoids a punishment from the sporting justice.

Juventus returns to La Liga to sign another striker