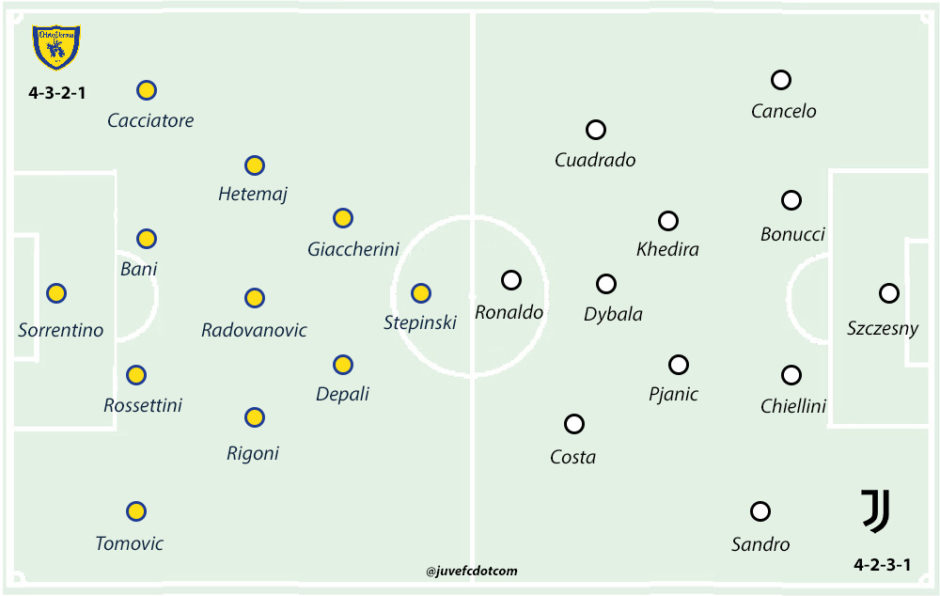 Juventus were 2-1 down on Cristiano’s Serie A debut before goals from Leonardo Bonucci and Federico Bernardeschi helped the Bianconeri to a 3-2 victory.

Wojciech Szczęsny: A spectator for the entire first half before being left stranded by his defence for the Chievo equaliser. Had no other notable saves to make and it was a 50/50 on the penalty.   6.0/10

Leonardo Bonucci: A good enough start, rekindling his partnership with Chiellini and showing why the two of them were such a formidable defensive duo. Caught ball-watching for the Chievo equaliser and he really should have down better. Made amends to an extent with the Juve equaliser (which may have be given as an own-goal, but he played his part in making it happen). Pretty solid from there on out.  6.0/10

Giorgio Chiellini: Started his tenure as Juventus captain in great style. Completely dominant and switched on at the back and was allowed to venture forward on occasion. Provided the assist for Khedira’s opening goal with a good pass and was seemingly untroubled in the second ’45. 6.5/10

Alex Sandro: Spent much of the first 45 minutes in the opposition half, overlapping brilliantly with Costa down the left. Made run after run into the final third before providing the assist for Juve’s wining goal, late on. A performance reminiscent of his debut best. 7.0/10

Joao Cancelo: A good debut display from the right-back who helped stretch the Chievo defence by pushing so high up the pitch in the first half. Kept pressing in the Chievo half but showed he has plenty to work on in his defensive game by conceding a poor penalty. 6.0/10

Sami Khedira: Took the opening goal in good fashion but was very anonymous for much of the game afterwards. Looked to be lacking in energy and drive and was substituted late on.  6.5/10

Miralem Pjanic: Exceptional at pulling the strings today – Dropped deep to collect the ball and spread play all over the pitch. Good delivery on all his set-pieces in the first half and he was truly directing the play in the second. 6.5/10

Douglas Costa: Picked up where he left off last season, sprinting down the wing and cutting in at every opportunity. Could well have scored a brilliant second goal for Juve with a lovely volley. Made some smart runs into the box that deserved better work from his teammates, but a good display overall. 6.5/10

Juan Cuadrado: Positive in getting forward into the final third but his finishing left a lot to be desired. Put some good crosses into the box but he could and should have done better when in possesion. 6.0/10

Paulo Dybala: A few nice links up with Ronaldo aside, he was relatively quiet for the opening half before having a half chance late on. Improved as the game went on and seemed to have a good spell when Juve were 2-1 down. Really needs to stamp his authority on games more.  6.0/10

Cristiano Ronaldo: Stretched the Chievo back line really well, drifting wide to the left and dropping deep. Made some smart runs and had two half chances in the first 45 mins. Tested Sorrentino from range on more than one occasion and showed some great flicks and tricks to create opportunities for himself and his teammates. Deserved at least a goal for his efforts.  7.0/10

Federico Bernardeschi: Was lucky not to be booked when coming on – A stupid an needless reaction. Imposed himself more on the game as it went on and provided a deft finish to win the game for Juventus. A great cameo performance. 7.0/10

Mario Mandzukic: Brought a more physical element to Juve’s game as he provided a more static reference point for Juve’s deliveries into the box. His goal should have stood, despite the injury to Sorrentino. 6.0/10

Emre Can: A brief cameo display, late in the game but he showed some nice touches and good strength in the air. 6.0/10