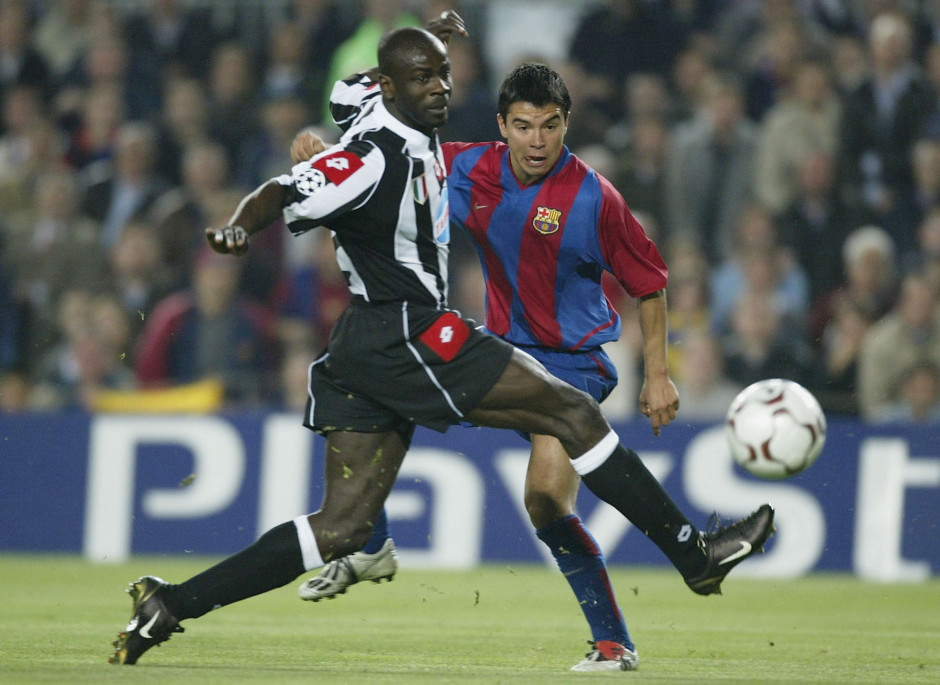 Juventus vs Barcelona has been a dormant fixture as of late, the two sides haven’t faced each other in a competitive fixture in over 12 years, but the battle between the black and white vs the red and blue will remerge once more, this time in the Champions League Final in Berlin this week. We here at JuveFC will delve into the archives and review a classic game between these two iconic clubs.

After debating whether to review the Cup Winners’ Cup semi final clash of 1991 or the Champions League quarterfinal tussle of 2003 we plumped for the latter.

So it’s April 22nd 2003 at the Camp Nou for the second leg following a 1-1 draw two weeks prior at the Stadio delle Alpi. Both sides were having contrasting fortunes in their respective domestic campaigns, Juve were sitting top of the Serie A table, six points ahead of Inter and had beaten Roma the previous weekend.

Barcelona meanwhile were floundering as Louis van Gaal’s return to the club lasted all of six months before he got sacked with the club languishing in the bottom half of La Liga, Radomir Antic was brought in to oversee the club until the end of the season and their best chance of getting into the Champions League for the following season was to win it.

This was the final season of the failed two-group stage experiment in the competition, Juve topped their first group stage ahead of Newcastle and finished runners up to Man Utd in the second. Barcelona won 6 from 6 in their opening group stage and also topped the second won ahead of Inter.

The Italian champions were missing David Trezeguet for the crunch game; he also missed the first leg due to injury. Gigi Buffon is the only survivor from the match who is still at Juventus. Barcelona were more or less at full strength for the encounter with current Barca manager Luis Enrique starting in midfield alongside Xavi, who will play his last game for the club in the 2015 final. Current Verona striker Javier Saviola started up front for the Catalans. 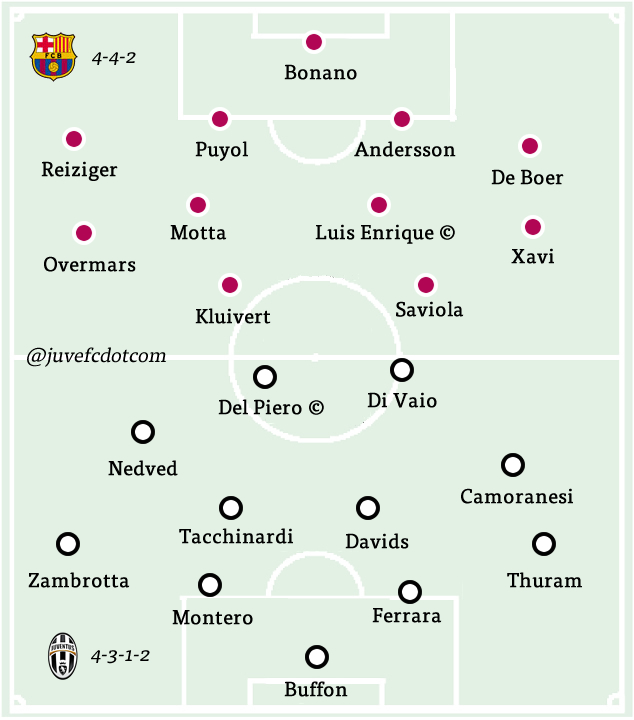 The Camp Nou is packed to the rafters with 98,000 people creating a deluge of noise as the teams walk out to the center of the pitch. Graham Poll is the referee for the game, who was viewed as one of the best in the game at the time.

The home side gets the game underway and almost scores immediately as Saviola rises to head a Overmars cross over the bar with the goal at his mercy. Juve hit right back and Di Vaio is through on goal after a glorious ball over the top from Tacchinardi but the striker slips just before he can strike the ball.

The game is played at a pulsating rate with chances for both sides, Del Piero pulls a good save from Bonano and a very young looking Thiago Motta nearly scores from a curling free kick. There was a massive shout for handball when Kluivert hit the ball into the air and on to the forearm of Thuram, after watching the replay several times you would have to say Juve were very fortunate as Thuram’s arm was outstretched.

Juve then go up the other end and Davids smashes a volley straight at Bonano from a tight angle.

After more back and forth that produced no further chances Graham Poll blew for the half time whistle, as it stood Barca where going through on away goals.

Juve made two changes for the second half, with Di Vaio and Camoranesi being replaced with Marcelo Zalayeta and Alessandro Birindelli.

The second half restarts much in the fashion of the first, with Barcelona going on the attack. Somehow Luis Enrique misses a sitter, the Spanish midfielder glides into the box, feints a shoulder on Montero who falls for it, and now just one on one with Buffon, he opens his body to curl the ball around the Juve stopper but doesn’t curl it enough and the ball flies past the post. Huge let off for the Bianconeri. Enrique sinks to his knees in disbelief.

Enrique would come to regret that miss as minutes later the away side takes the lead through Pavel Nedved. Edgar Davids, arguably Juve’s best player on the pitch, wins possession of the ball on the left hand touchline, the pitbull then strides forward several yards but slipping the ball into the feet of Nedved on the periphery of the Barca box. The Czech cuts inside Andersson and runs into the box unopposed as several Barca players chase him but then cant get close enough to make a challenge. He hits the ball with his instep and it flies past Bonano into the bottom right hand corner of his net.

Minutes after the goal Nedved almost adds another goal was a spectacular effort, bending a shot from 35 yards that is arching into the top corner only for Bonano to make an incredible save to tip it over for a corner.

Juve’s lead only lasted 13 minutes as the Catalans equalise through a familiar face, Xavi. They work the ball intricately around the edge of the box before landing at the feet of the skipper Luis Enrique, who crosses the ball into the box. Thuram heads the ball outwards but the ball lands to Xavi at the tip of the box, who takes it down and hits a fierce half volley which goes through the legs of the onrushing Thuram and arrows into Buffon’s net. Barca are now back in the ascendency. 2-2 on aggregate

The game ebbed and flowed with chances for each side through Del Piero and Saviola, and then in the 79th minute Poll reduced Juve to ten men. Edgar Davids, already on a yellow card, gained a second yellow for holding back Gaizka Mendieta. Juve’s challenge just got harder. Minutes later Lippi made a tactical gamble, taking off Del Piero for center back Igor Tudor.

There were no further chances as the clock ticked down to the end of the 90 minutes; it would now go into extra time.

Barcelona cranked up the pressure on ten man Juve, now with the enigmatic genius Juan Roman Riquelme on the field, Barca were now finding pockets of space but the Juve rearguard was holding firm.

Now into the second half of extra time and with Barca again swarming forward in search of the second goal, Buffon pulls off a brilliant save to deny Kluivert an exquisite overhead kick from a Xavi chipped through ball.

It was looking like only a matter of time before the home side would score, the pressure was mounting. Yet then from nowhere, Juventus took the lead!

From a Barcelona corner the ball found its way to Nedved, he passed into the feet of Zalayeta just on the tip of the center circle in the Barca half. Zalayeta turned and sprayed the ball to his left to Birindelli, the Juve utility man galloped forward before pinging a glorious cross into the path of Zalayeta, who was unmarked in the box, he gently redirected the ball with his right instep and it nestled into the bottom corner. You could hear a pin drop inside the Camp Nou.

Zalayeta was at Juventus on and off for a decade and he is best remembered for two goals; one against Real Madrid in the last 16 of the 2004-05 Champions League and this goal against Barcelona. He didn’t score many goals, but when he did, they undoubtedly mattered.

Juve’s second goal deflated the home side and the clocked wound down with little fight from the Blaugrana. Graham Poll finally blew for the full time whistle with the Juventus players estatic and the home side totally dejected. Lippi’s gamble had paid off.

Juventus would of course go on to beat another Spanish opponent Real Madrid in the semi final before suffering another final defeat to Milan in a final short of flair and creativity. 1 final win out of 4 ultimately hurt Lippi’s legacy.

The rise of Barcelona can be traced back to the summer of 2003, following the exit to Juve, Joan Laporta became president, sold most of the players who featured against the Bianconeri, hired Frank Rijkaard and signed Ronaldinho. That in turn created the nucleus of everything that the club was to become in the following years.

Juve on the other hand would stagnate and then crumble following this season and it’s taken 12 long years to get back to the summit of the European game. Win or lose against Barcelona this week they have turned heads with this unexpected run to the final.

Lets hope Max Allegri’s and his troops can pull off a victory in the manner in which Marcello Lippi done over 12 years ago.