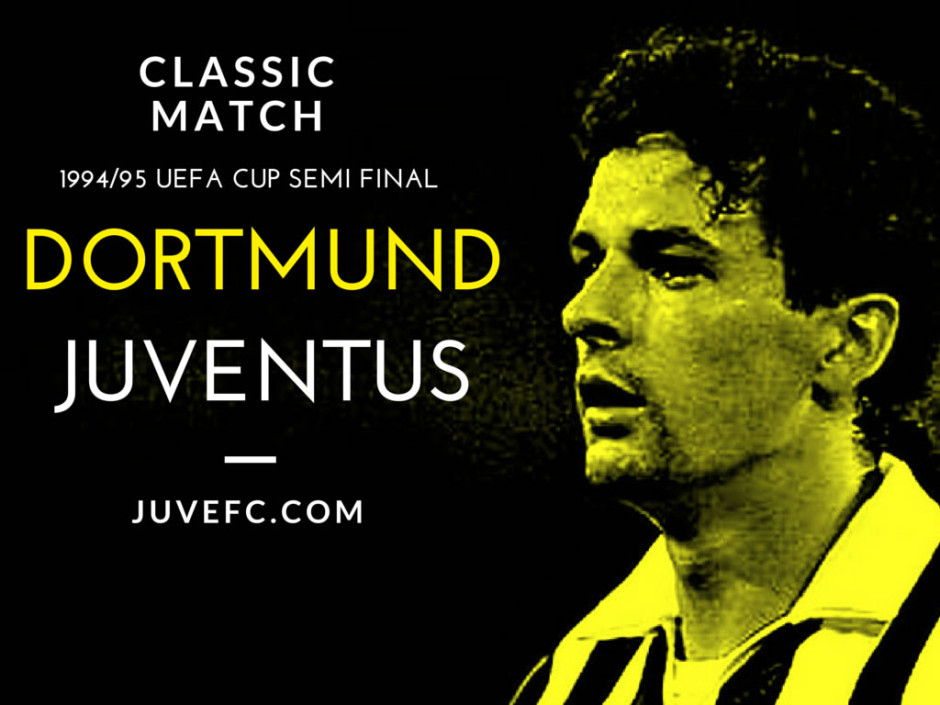 Just shy of two years since the annihilation of the 1993 UEFA Cup final, Juventus and Borussia Dortmund once again locked horns in the UEFA Cup. Only this time it was a round prior, at the semi final stage. The last four contained two German-Italian clashes as Parma faced off against Bayer Leverkusen in the other semi final.

There had been some changes for both sides since the final of ‘93, Giovanni Trapattoni had left the Bianconeri in the summer of ’94 to be replaced with one Marcello Lippi. Two of the German’s who played instrumental roles in the UEFA Cup triumph, Julio Cesar and Andreas Moeller, had left the grey plains of Turin for the industrial heartland of the Rhine and would both star against their old team. Many of the players who featured two years ago were still present.

The first leg in Turin ended in a bubbly 2-2 encounter with Jurgen Kohler salvaging a draw for the hosts after former Bianconero Moeller had given Dortmund the lead. The return match in the Westfalenstadion on April 18th now fell on a knife-edge.

Juve were aiming for the first treble in Italian football history as they were leading the league table and the previous week had beaten Lazio to secure a place in the final of the Coppa Italia. Dortmund on the other hand was hoping to secure a double having been knocked out of the German Cup in the second round. The pressure on both sides was immense.

There were several big blows for Borussia going into the game, as Andreas Moeller, Matthias Sammer and former Lazio striker Karl-Heinz Riedle were absent due to receiving two yellow cards in the tournament. Gianluca Vialli and Angelo Peruzzi are also out for The Old Lady with injuries and Moreno Torricelli was serving a suspension for being sent off in the first leg. 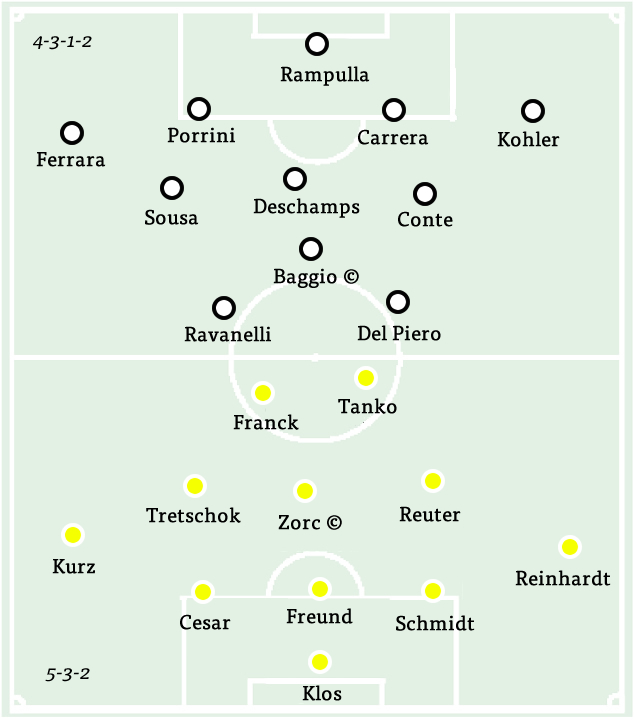 Dortmund kick things off as the opening minutes are played at a relentless pace with the Germans immediately going for the jugular. There is an ugly knee on knee clash between Kohler and Zorc that has the Juve defender hobbling in agony. From the resulting free kick Del Piero, then wearing the no.9 jersey (a very weird sight) wins a corner kick.

Baggio runs over to take the corner kick to a chorus of boos from the home supporters, they clearly haven’t forgot the torment he caused them 2 years ago. He whips the ball into the front post to Sergio Porrini who is totally unmarked, the defender scoops down and cleverly heads the ball with the top of his head, changing the trajectory of the ball towards the back post and into the net. Only six minutes on the clock and Juve having taken the lead for the first time in the tie. The rapturous home crowd falls silent.

Juve are forced to make a change as Kohler hasn’t recovered from his earlier clash and cannot continue. ‘The Little Soldier’ Angelo Di Livio replaces him after only ten minutes as Borussia win a free kick in dangerous territory.

Captain Zorc tees up former defender Julio Cesar with a back heel, who runs up and lashes the ball low and hard through the legs of Antonio Conte and past the outstretched leg of Rampulla to equalise. Juve’s lead lasted a mere 4 minutes.

Following the goal, the intensity of the game partially fades but there are chances for either side, Tanko perhaps should have scored but failed to connect with ball while Ferrara headed over the bar from an almost identical situation as the earlier Porrini goal.

In the 31st minute the Bianconeri take the lead once more, and what a moment of brilliance it is. With the ball bouncing on the periphery of the Dortmund box, Tretschok fouls Di Livio. Baggio places the ball down and takes in the situation, throughout the course of his distinguished career he had various ways of taking free kicks, one such method was to simply take a step or two and hit the ball with his instep.

Another technique, one that he mostly used during his time at Juve, was to run at the ball as if he was going to hit it with his laces, yet at the last second he would bend the ball beautifully with the inside of his right foot. It was this technique that he called on here.

As he hit the ball it arched majestically and travelled at pace into Klos’s top right hand corner, the German international barely moved as the ball clipped the underside of the crossbar and into the net. It was a goal worthy of any occasion and one of his finest free kicks. He runs over to celebrate with Lippi, jumping on his manager and future nemesis (given everything that transpired between the pair later, a very surreal image indeed). Juve are now ahead 4-3 on aggregate.

Following the goal the game becomes a bit more heated as tackles are flying in, Deschamps and Del Piero particularly are guilty of late tackles. However Juve are now starting to control the game further and nearly score a third from an outrageous Baggio effort as he so nearly lobs Klos from the left hand touchline some 35 yards from goal but the German makes an acrobatic save to palm the ball away.

The Old Lady restrict Borrusia to half chances before the Dutch (again) referee blows for half time after five minutes of injury time.

On a peculiar side note, there are no technical areas for either manager to roam around in so Lippi and Hitzfeld, who happened to be wearing the same colour of coat, are literally side by side watching the match together while trying to give instructions throughout the course of the match, a very odd sight.

The second half gets underway and it takes a while for the two teams to get into any rhythm as the ball bounces from one half to the other. The first real chance falls to a very young Lars Ricken, yes that Lars Ricken, the hero of 1997, after being played through by Tretschok. The substitute races in behind Porrini on the right hand side of Juve’s box, whilst shoving him to the ground, but he can’t steer his effort on goal as he drags it wide. He would make up for his miss two years later however.

The home team suffers a blow in the 58th minute as Julio Cesar has to be replaced after injuring his hamstring trying to block a Ravanelli half volley. Ned Zelic comes on for the Brazilian.

Ten minutes later there was huge controversy as Ricken has a goal disallowed, Tanko dispossesses Carrera by the corner flag on the left side of the Juventus half, he then swings over a brilliant cross into the far post for Ricken who heads it past Rampulla who is in no mans land, but the referee had blown his whistle before the ball had even touched the back of the net.

A host of Dortmund players race over to both the referee and the linesman to remonstrate but it seems that the goal was disallowed due to what the linesman believed was a foul on Carrera by Tanko when he dispossessed him of the ball. Fortunately for Juve the scoreline remains 1-2.

The German side is now piling on the pressure and Tanko has a shot that is deflected into the side netting. Last 20 minutes culminates in nail-biting stuff, like two heavyweight boxers slugging it out in the last two rounds. Dortmund keep streaming forward without really testing Rampulla and with less than ten minutes left Baggio tees up Sousa who hits a scorcher of a shot which cannons off the post and back into play which surely would have killed the tie.

Klos saves two Ravanelli shots in succession as Juve aim for the jugular then immediately Borussia go straight down the other end and should have scored as Tretschok plays a one-two with Zorc in headers before Trestchok smashes a half-volley high in the Dortmund stands from 12 yards out. A gripping sequence of events.

As the referee called time on a pulsating match, the Juve players all ran to their captain to celebrate. His moment of brilliance had won the game and the tie for The Old Lady, both teams were excellent but the loss of Sammer, Moeller and Riedle significantly hurt the Germans in the end. After the events of two years before Borussia showed they were a very capable side and much improved and arguably would only get better.

Juve would face Parma in another all-Italian UEFA Cup final, losing 2-1 on aggregate, one of Juve’s heroes from 1993, Dino Baggio, would score the killer blows to his old sides’ chances of a first Italian treble, scoring both of Parma’s goals. Juve would gain revenge by beating Parma in the final of the Coppa Italia a month later, securing a domestic double. They haven’t won the Coppa since.

It wouldn’t be too long before Juventus and Borussia Dortmund would meet yet again, however both teams would move on from the UEFA Cup competition, as we will find out in our third and final look back at this intense rivalry, stay tuned to JuveFC for the next installment.