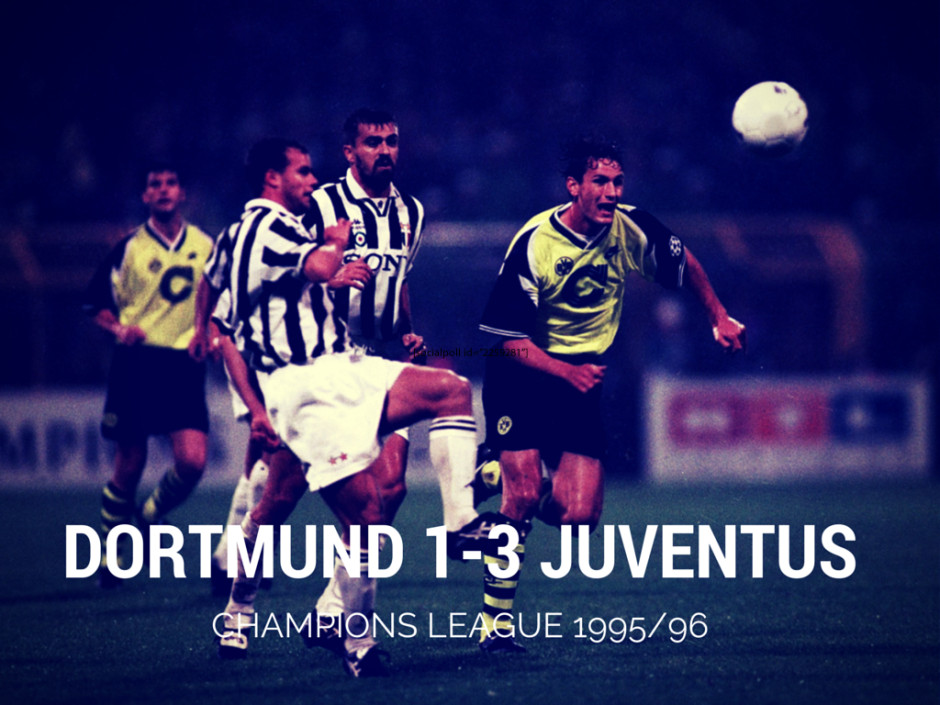 ‘’Juventus again?’’ Ottmar Hitzfeld must have muttered to himself upon learning that his side had yet again been drawn against this now regular adversary. A mere six months since the clubs had last met in the UEFA Cup semi final (which we covered here) in April 1995, both sides would engage again, only this time in the Champions League. Having won their respective leagues in 1994/95, Borussia and Juve were drawn in the same group stage alongside Rangers and Steaua Bucharest in Group C. Juventus hadn’t played in a European Cup match since November 1986.

The Old Lady would travel to Germany for the opening fixture in the group on September 13th 1995. Since the enthralling semi final half a year earlier both sides had undergone some changes. The biggest one was for the away side as there was now a new no.10 in town, or rather there already was two and one departed. Roberto Baggio had left Juventus in the summer of 1995 after five years at the club, having been asked by the infamous ‘triad’ to take a wage cut, the Divine Ponytail balked at their suggestion and with Lippi aiming to make the team less ‘Baggio-dependent’, he made the move across Northern Italy to Milan.

In keeping with the mid-90s tradition of German players moving from Juventus to Borussia, Jurgen Kohler was the 4th and last German to make the move back to the motherland. Kohler’s departure signalled the end of Juve’s German craze that started after Italia ’90. No German has played for the club since.

Borussia’s core starting XI remained the same and with the additions of Kohler and Heiko Herrlich, signed from Borussia Monchengladbach, this was a very good Dortmund team, arguably the strongest Juve had come up against in this nearly annual fixture. Only Klos, Reinhardt and Reuter are veterans of the first encounter from 1993. 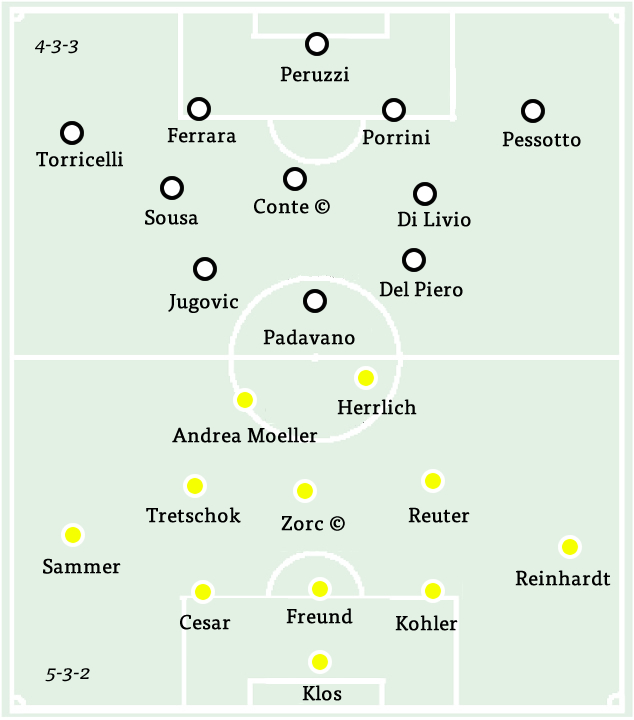 New Juve skipper Antonio Conte leads out the Bianconeri in front of a typically rambunctious crowd of nearly 36,000 in the Westfalenstadion. The stadium looks to have undergone renovation since the UEFA Cup semi final, as the pitch doesn’t possess the claustrophobic feel that it did six months prior. The referee surprisingly isn’t Dutch on this occasion,

The game gets off to a flying start as the home team score within 40 seconds of the first kick. Borussia launch the ball into Juve’s half with both sides trying to gain possession of the ball, Sergio Porrini tries to pass the ball to Di Livio but the midfielder had already started to sprint forward, so Rene Tretschok picks up the loose ball and tries to slide a pass into Herrlich on the edge of the penalty box but lacks power, Ciro Ferrara intercepts the ball but can only hit it with his heel and Andreas Moeller latches onto the ball and strikes a hard low shot with his left foot before Porrini can make the save, the ball flashes past Peruzzi who in reality should have done better. Moeller runs off to celebrate, again scoring against his old club.

Juve come roaring back and Conte tries a curling effort from outside the area but the strike is lacking in conviction and goes out for a goal kick.

Eleven minutes after Borussia scored Juve equalise with a brilliant goal. Padavano wins the ball in midfield and lays it off to Pessotto, the left back carries the ball a short distance before passing it to Del Piero, the new no.10 crosses the ball on to the head of Padavano, who is standing on the periphery of the box displays some fine neck muscles by executing a marvellous header, that curls into Stefan Klos’s top right hand corner, hitting the angle on the way in. Arguably the best goal he would score in his short Juventus career.

Padvano is in the thick of the action as he so nearly scores again, hitting a scorching left footed short that flashed past Klos’s goal from a tight angle, and then minutes later nearly getting sent off for a truly horrendous tackle on Reuter which had it happened in the modern era would have been an automatic red card; Padavano is brandished a yellow.

Alessandro Del Piero announced himself on the Champions League stage in the 37th minute, giving Juventus the lead and simultaneously would give rise to the creation of a footballing term that lives on to this day.

As Dortmund attack in the The Old Lady’s half, the ball breaks to Jugovic, who passes it to Sousa, the Portuguese maestro spreads a beautiful ball down the left hand channel with the outside of his right foot for Del Piero to chase on the counter. The Padova native picks up the ball deep in the Dortmund half before making his way into the penalty box, faced with former teammate Kohler, he swivels to his right before dropping back on to his left and finally pushing the ball once again on to his right foot but going increasingly further away from goal, he majestically bends the ball with the inside of his right foot over Klos, who is stranded, into the top left hand corner. The 20 year old peels away in celebration, soon to be mobbed by all his teammates.

Similar goals against Steaua and Rangers later in the competition meant that the term ‘Zona Del Piero’, coined by the media, would become part of Juve folklore and coincide with the no.10’s meteoric rise.

As the Swiss referee blows for half time Juve can be content in knowing that they have restricted Dortmund to half chances since their goal and look the more dominant team.

Dortmund makes two changes at the start of the second half, Tanko and former Inter striker Ruben Sosa coming on for Zorc and Tretschok.

Just as he did at the beginning of the first half, Moeller once again takes aim at Peruzzi’s goal only this time the Juve stopper is equal to the strike and saves it, just.

Tensions are ratcheted up a notch as Torricelli gives Sosa a nice ‘welcome to the Champions League’ gesture by hacking him in two and earning a yellow card, the Uruguayan it has to be said took it in good grace.

Minutes later and the German side really should have equalized, with the ball bouncing between both sets of players, the ball somehow makes its way to Sosa as Juve’s offside trap fails, he races towards goal before slipping in Herrlich who contrives to miss an open goal from no more than six yards out. A massive let off for the Bianconeri.

They would rue that miss as in the 69th minute Juve would score a third and put the game to bed. Once more Del Piero was involved. Paulo Sousa picks up the ball in midfield before sharply passing it to Pessotto, who lobs it into the path of Del Piero, up against Sammer, he drops his right shoulder and crosses the ball into the path of the advancing Conte, who dives to head the ball into the bottom corner of the net. A fantastically well-worked goal by Juventus and the game is now truly over. Del Piero has now scored one and assisted two.

In stoppage time Padavano would score a second goal from another Del Piero assist but the goal was flagged for offside.

Juve’s first European Cup game for nearly a decade got off to a winning start as the referee blows for full time. Marcello Lippi’s men would go on to top the group with 4 wins, 1 draw and 1 loss – against Dortmund at home. The German’s finally emerging victorious at the fifth attempt, and of course Juve would lift the trophy in Rome in May 1996, beating Louis van Gaal’s brilliant Ajax side in the final on penalties.

Dortmund and Juve would meet one more time, in the final of 1997 Champions League, when a rampant Juve were expected to brush their opponents aside, yet Borussia would shock the world and win in the Olympic Stadium in Munich. The great thing about this rivalry was that is was bookended by finals, with the first meeting between the pair in the final of the UEFA Cup and the final meeting four years later in the Champions League. The two wouldn’t be paired again until this season, eighteen years later. The final tally was 4 Juve wins, 2 Dortmund victories and 1 draw.

It was a truly epic rivalry between two fantastic clubs.