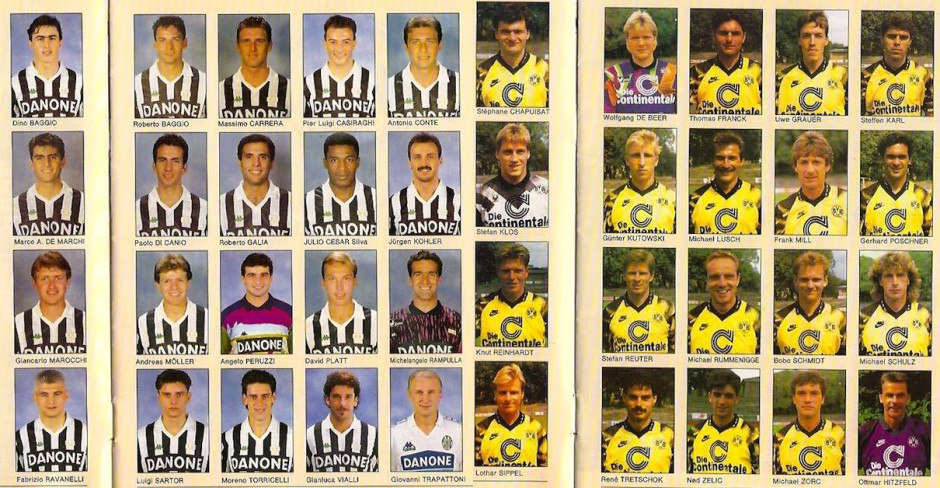 Ask the majority of Juventus fans to recollect the club’s greatest European rivalries and more than likely two clubs will crop up without hesitation; Real Madrid and Man Utd. The Bianconeri have continually duked it out with Los Merengues over the last several decades, resulting in some classic battles. Whilst over three seasons in the late ‘90s Juve and United engaged in some legendary battles, culminating in the now almost mythical semi final 2nd leg match in 1998/99 .

However a feud that is overlooked but undoubtedly worthy of a mention is the one with Borussia Dortmund, during the early to mid 1990s these two sides seemingly battled it out in Europe every season, from 1993 to 1997 over the course of two different competitions the pair faced off against each other an incredible seven times. Resulting in some classic bouts. As the last 16 knockout games loom ever closer, we at JuveFC have decided to re-visit some of the confrontations between the two sides.

Our first game is the second leg of the 1992/93 UEFA Cup final on May 19th 1993. Juventus, then under the tutelage of Giovanni Trapattoni in his second spell as boss, had already beaten the Germans 1-3 two weeks prior in the Westfalenstadion thanks to three goals from the Baggio’s. Dortmund’s single goal meant the tie wasn’t over but the first goal ultimately would be crucial in deciding the destination of the trophy.

The UEFA Cup of the 1990s was an entirely different beast in comparison to the ramshackle of a tournament that exists today, the tournament was the true barometer of how good a domestic league was, with the rebranded Champions League only allowing the champions to enter (shock horror), the caliber of teams frequently entering into the UEFA Cup was astounding. The 1992/93 season edition saw Real Madrid, Man Utd, Roma, Valencia, PSG and Ajax all compete for the trophy, almost unthinkable in todays modern game. This was a competition with genuine quality throughout.

The Old Lady saw off Anorthosis Famagusta, Panathinaikos, Sigma Olomouc, Benfica and PSG while the Germans overcame Floriana, Celtic, Real Zaragoza, Roma and Auxerre to make it to the two-legged showpiece. 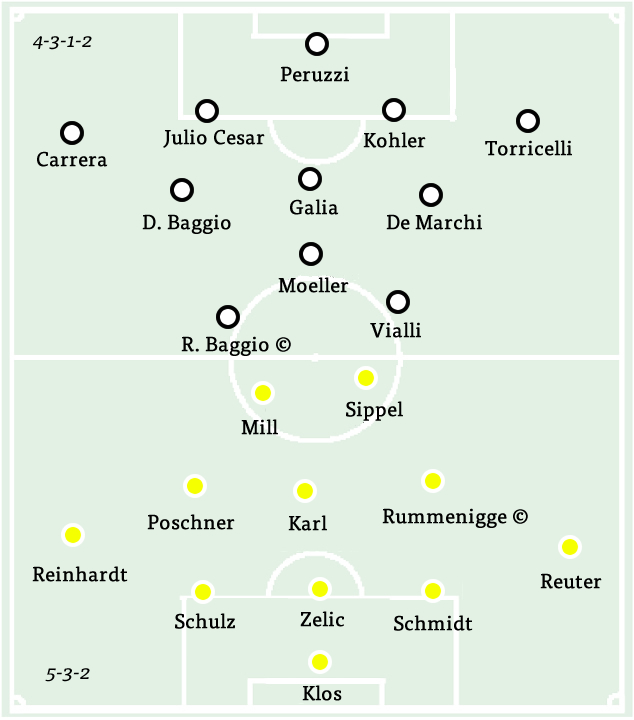 Roby Baggio led La Vecchia Signora out in front of a rapturous crowd of 62,000 in the Stadio delle Alpi as Borussia win the coin toss and thus kick off the game. The match had barely got underway when the tie was settled.

Only five minutes had ran on the clock when the Brazilian Julio Cesar launches a long ball into the heart of the Dortmund defence, Gianluca Vialli, still at this time sporting a full head of hair, wins a header on the edge of the box and directs the ball to Dino Baggio. The midfielder nips in front of his marker to win the ball, it falls kindly back into the path of Vialli, now seeing Baggio making a diagonal run in behind him, he effortlessly back heels the ball into his path. The younger Baggio runs into the box, keeps his cool and slams a ferocious angled left footed shot past Klos into the roof of the net to give Juve the lead. Despite being a goal scorer throughout his career, Vialli was never given due credit for being an incisively intelligent footballer on the pitch, capable of assisting as much as scoring goals.

With Juve now having a three-goal cushion and the contest finished there was more freedom and fluidity in their play as they pushed forward in search of more goals. Late in the first half Roby Baggio almost added a second with a trademark slalom run, receiving the ball from De Marchi on the left hand side of the Dortmund half, he arrowed in on Stefan Klos’s goal but not before giving Bodo Schmidt the drop of the shoulder, then feigning a shot as Ned Zelic hurtled himself to the ground in an attempt to block the shot that never comes. The Divine One opens up his body and curls a brilliant effort that Klos is equal to.

Trapattoni’s men put the game beyond all measureable doubt several minutes later as The Old Lady add a second goal on the night and once again it’s Dino Baggio who claims the plaudits.

Andreas Moeller stands over a free kick on the periphery of the Dortmund box, the German beautifully lofts the ball towards the box on to the head of Baggio who ghosts in behind several Borussia players to powerfully guide the ball into Klos’s bottom right hand corner. The 22 year old peels away in celebration and is soon mobbed by his teammates. Incredibly Juve only had four players in the box to Dortmund’s eight and still managed to score. The score is now 5-1 on aggregate, game now well and truly over.

Mist descends on the pitch as the teams emerge for the start of the second half as Moeller and Vialli kick off. Borussia try to gain some respectability to the score line and force a good save from Peruzzi as Reinhardt delivers an excellent ball into the box which Lothar Sippel meets and directs the header downwards but is too close to the Juventus goalkeeper.

In the 65th minute Dortmund’s humiliation is complete as the Bianconeri add a third on the night and a sixth over the two legs. Roberto Baggio gains the ball just inside the Borussia half near the touchline and shimmies past midfielder Stefan Karl before checking back inside and playing the ball into the feet of Vialli. The Juve no.9 tries to make space but is doggedly followed by Schmidt, he races into the Dortmund penalty box but eventually passes the ball back to De Marchi.

De Marchi, who would leave Turin following the seasons end, plays the ball into the feet of Roby Baggio in the heart of the Borussia box, ll Divin Codino would engineer a flash of genius as with a defender marking him tightly, he deftly back heels the ball first time with his instep into the path of Moeller who has made the run to receive the ball. However the future Dortmund player wasn’t quick enough but fortune smiles on him as substitute Thomas Franck attempts to clear the ball but it deflects off Moeller’s shin and travels into the net. He runs off in celebration but would be the first to admit he knew little of the goal.

The remainder of the game sees Juve keeping possession of the ball and winding down the clock. Dutch referee John Blankenstein shows some compassion for Borussia and blows for his whistle 30 seconds before full time.

The Bianconeri are jubilant in celebration and Roberto Baggio lifts the trophy high into the Turin sky as the club won their second UEFA Cup in three years and their first piece of silverware since 1990. Roberto’s exploits in this competition would ultimately see him crowned the world’s finest player in December 1993 as he won the Ballon d’Or and FIFA World Player of the Year. Both Baggio’s had systematically destroyed the Germans over the course of this two-legged affair.

This would be ll Trap’s only trophy in his returning three-year spell as manager, but the UEFA Cup triumph served as the foundations for the all-conquering, European juggernaut Juve were to become for the rest of the 1990s.

This would only be the start of the Juve-Borussia rivalry as many more games where to follow in the upcoming seasons. Stay tuned for the next look back at a classic encounter between La Vecchia Signora and Die Schwarzgelben!

Champions League Q & A with The Yellow Wall