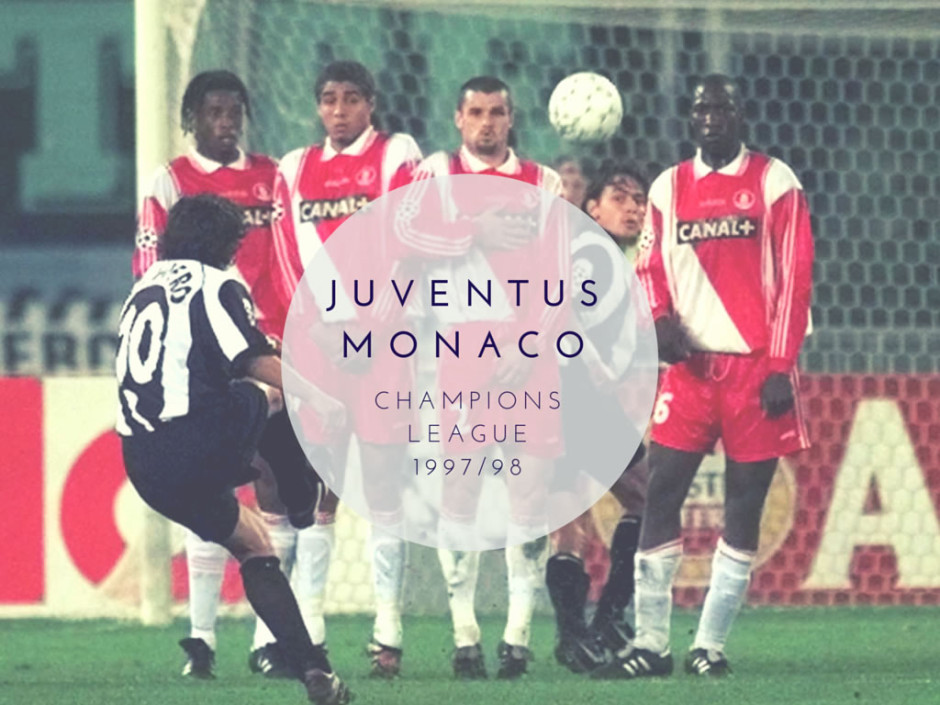 In the spring of 1998, Juventus were once more on the Champions league charge, having ruthlessly brushed the Dynamo Kiev side of Shevchenko and Rebrov aside in the quarter-finals, Monaco now lay in wait in the final four. Never before had the two sides met in continental competition, and they never met again until this season.

There are parallels between past and the present, the side from the rich principality had stunned everyone by knocking out Man Utd in the previous round. With future Juve legend David Trezeguet scoring a thunderbolt at Old Trafford to secure a draw and progress on away goals, and this season Monaco dispensed of Arsenal on away goals.

And like then just as now, Monaco went into the tie very much the underdogs yet had quality throughout the side with a mixture of experience and youth, players like Fabien Barthez, Martin Djetou, Willy Sagnol, John Collins, Victor Ikpeda, Theirry Henry and of course Trezeguet. Juve couldn’t afford to become complacent if they wanted to reach a third consecutive final.

Going into the first leg Juve had destroyed Fabio Capello’s Milan 4-1 at the Delle Alpi and were duking it out with Ronaldo’s Inter for the Scudetto in a legendary title race. Monaco were sitting in third place in Ligue 1

Both teams were mostly at full strength, Juve were without long term absentee Ciro Ferrara while Scottish international John Collins was missing for the French champions, managed by Jean Tigana. 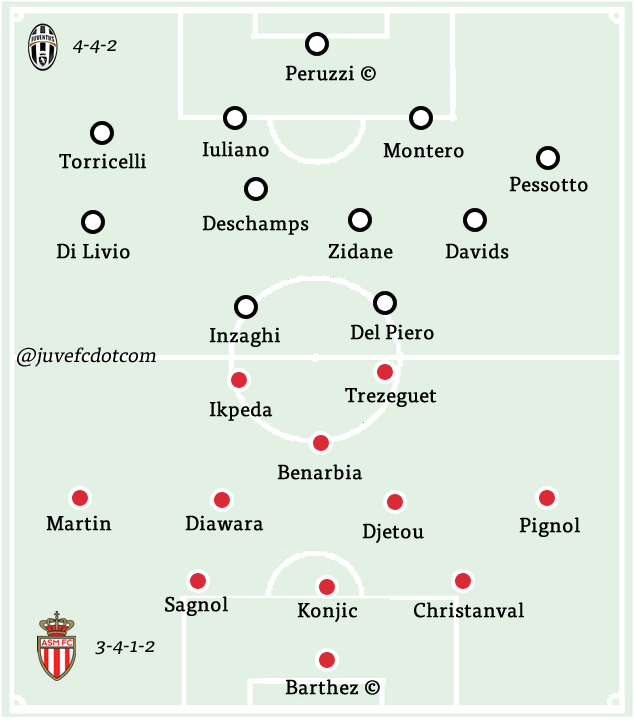 Peruzzi leads out the Bianconeri in front of 60,000 inside the much-despised Delle Alpi and the game begins.

Monaco were entering the home of the most feared side in Europe so logically they sat deep for most of the first half and hoped to hit on the counter. The breakthrough for Juve came in the 34th minute, and what a sublime goal it was.

After sharing a one-two with Del Piero on the left hand side of the pitch, Zidane goes on a majestic burst deep into the heart of the Monaco defence and is hacked down just outside the Monaco box by Djetou, who receives a yellow card.

Del Piero and Zidane stand over the ball but there is only one person who is going to strike it. Del Piero runs up and curls a sumptuous effort over the wall and into Barthez’s top right hand corner, who manages to get fingertips to the ball but cant stop the velocity of the strike. It was the Italian’s 7th goal in 8 games in the competition this season.

The lead only lasted ten minutes however as Monaco surprisingly equalise just before half time. Ali Benarbia takes a corner, which was poorly hit in truth, but the ball flashes across the Juve penalty area and out to the periphery of the box to Costinha, the future Porto star who had only been on the pitch for several minutes having replaced Pignol, hits a half volley with his instep which takes a deflection off Inzaghi, through the legs of Torricelli and travels into Peruzzi’s bottom left hand corner. Monaco has an away goal.

A minute later Juve restore their lead, Del Piero plays a delightful through ball to the feet of Inzaghi just inside the Monaco box, he instantly releases it to the onrushing Zidane who charges towards Barthez who brings him down without getting near the ball. Undoubtedly a penalty.

Del Piero slots the ball home, much like the free kick, into the right hand corner, Barthez once again getting fingertips to the ball. ll Pinturcchio now 8 for 8 in the competition.

The Russian referee blows for the half time whistle just as Barthez picks the ball out of the net.

The second half begins much in the same vein as the first, with Monaco intent on keeping their shape. During the half time break Lippi took off Pessotto for fellow workhorse Alessandro Birindelli. With 61 minutes on the clock the home side are awarded yet another penalty, and a stonewall one it was.

Antonio Conte, who had just replaced Torricelli minutes earlier, passes the ball to the elegant feet of Zidane, the Frenchman instantly controls it and swivels before sliding the ball through to Conte once more, the midfielder races towards the Monaco box before laying it off for Inzaghi who is running diagonally. The no.9 is about to pull the trigger before he is hacked down inside the area, leaving the Russian referee in no doubt.

Once again it is Del Piero against Barthez, and just like their two previous encounters, Del Piero aims for the goalkeepers’ right hand corner and the ball rockets into the corner, Barthez went the right way but could not keep it out. Del Piero completes his hat trick and Juve now in firm control of the tie.

With only minutes remaining on the clock Juve complete a route when they make it 4-1. Del Piero and Zidane had tormented the Monaco backline all game, and the two combined once more for the mercurial midfielder to add his name to the scoresheet.

Zidane played a typical incisive through ball to the feet of Del Piero on the edge of the box, who waits for Zidane to catch up, he passes the ball to Zizou who takes one touch to control the ball and while still at full stride beautifully curls the ball with his instep into Barthez’s bottom left hand corner to all but guarantee Juve’s place in yet another Champions League final.

With the 2nd leg two weeks later, Monaco knew the away goal gave them a sliver of hope yet it was highly unlikely that they could turn it around against this Juve side who were quite rightly the most dominant side in Europe.

We will review the second leg next week here on JuveFC.