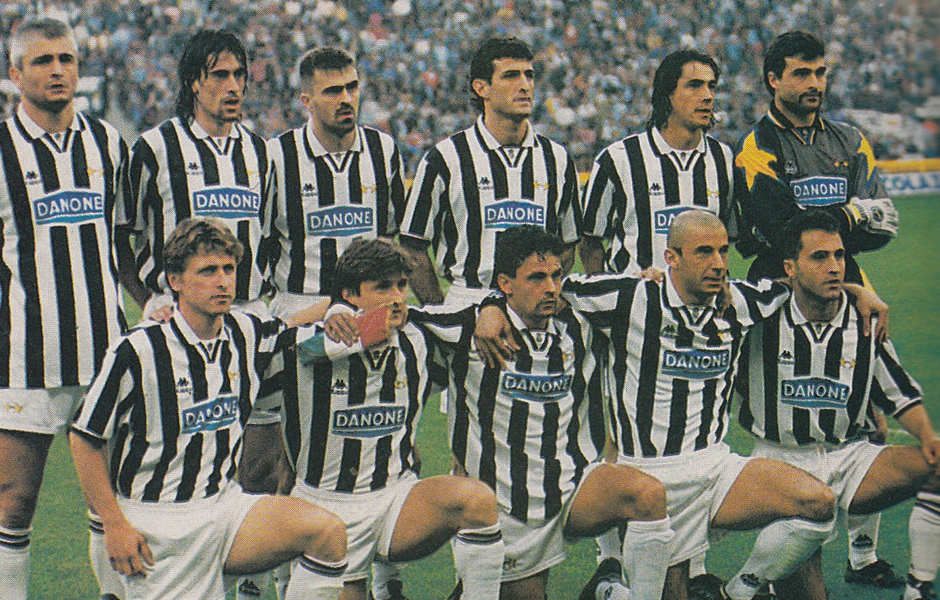 Sometimes in the beautiful game there is a season in which a league is comprehensively dominated by one or several teams. In Serie A, the 2004/05 campaign was dictated by Juventus and Milan and reached a gripping crescendo in a game on May 8th 2005, which was the subject of the first piece written in this series.

Another campaign that has echoed throughout the ages was the incredible 2001/02 season, which saw Juve, Roma and Inter all heading into the final round of the season capable of winning the title.

Few seasons in any league however can match up to the supremacy shown by Juventus and Parma in the 1994/95 season, when Serie A was at the peak of it’s magnificent pomp and arguably the finest league ever witnessed in the history of the sport.

The two clubs dominated not only domestically but also in Europe, squaring off five times in the space of two months. Contesting in the finals of both the Coppa Italia and the UEFA Cup and also a league encounter, which is the focus of this article.

Today it’s almost hard to envisage Parma being major competitors in the Italian and European game, given everything the club has been through since Parmalat’s financial collapse in 2003, but the Parma of modern times are nothing like their counterparts two decades ago. Of the fabled ‘seven sisters’ of Serie A during the ‘90s they were undoubtedly the neutrals favourite, and 1994/95 was the pinnacle of their golden age with Nevio Scala at the helm.

Marcello Lippi was in his first season at Juventus after arriving from Napoli and had transformed a highly talented yet under performing squad into a swashbuckling team on the cusp of greatness.

The state of play heading into the game was simple; Juve were 7 points clear of second placed Parma with three games remaining. If The Old Lady won, the Serie A crown would return to Turin for the first time in nine long, underwhelming years. If Parma could claim victory, it would keep the title race open for another week.

The two sides had met only four days prior in the second leg of the UEFA Cup Final at the San Siro, then a two game finale, with a 1-1 draw Parma were victorious 2-1 on aggregate. Ultimately denying Juve the chance of an historic treble. Lippi’s men were out for revenge

Lippi’s side had no injury concerns except for the absence of Ciro Ferrara at the back. Meanwhile Scala’s Parma was at full strength, an indication of how strong Parma were was the fact that they could afford to keep one of the stars of the previous summers’ World Cup, Tomas Brolin, on the bench.

Both teams were triumphant the previous weekend, Juventus beating Genoa 4 – 0 at the Marassi (including Roberto Baggio’s last ever goal for the club), whilst Parma won 1-0 at home to Bari. 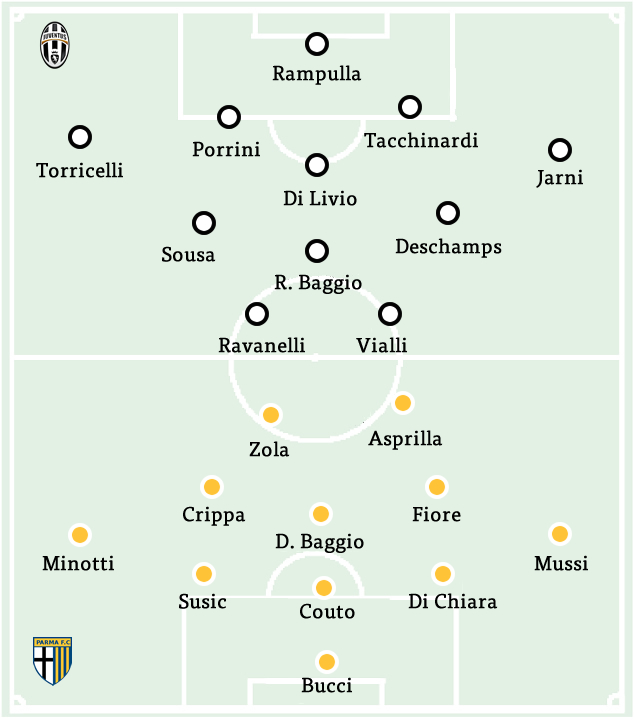 The two sides stride on to the pitch on a beautiful Piedmont Sunday afternoon (had this game been played today, it most certainly would have been played at night). The much-maligned Stadio delle Alpi almost filled to capacity.

Parma kick off and almost immediately the game has to be stopped as Fernando Couto – sporting such a splendid mane of hair that he could pass off a resemblance to Slash from Guns N’ Roses – plants his face into Fabrizio Ravanelli’s elbow and crashes to the floor. He receives the stretcher treatment as the game continues with Parma momentarily down to ten men.

Juve are in control in the opening stages and Bucci is called into action as Baggio tees up Sousa for a piledriver from outside the box, which the Parma stopper palms outrageously high into the air. It’s an early warning sign of what’s to come.

With a little more than ten minutes on the clock, La Vecchia Signora score the opening goal. Parma win a corner which is poorly taken by Zola, Di Livio clears the ball into the middle of the pitch where Susic haphazardly attempts to control the ball with his knee, bouncing off him into the path of Baggio.

II Divin Codino runs to meet the ball and delicately chips the ball over Susic into the path of The White Feather, who sprints towards goal, heading the bouncing ball downwards in an attempt to get it on the floor. The hapless Susic manages to catch up to Ravanelli just outside the box, but just as he does so the striker brings the ball back with his right foot before unleashing a brilliant curling shot with his left into the bottom right hand corner of the Parma net. The no.11 runs away and it isn’t long before his patented ‘t-shirt over the head’ celebration is on display.

The camera then pans to a shot of the late Umberto Agnelli, and sitting underneath him is his son and future Juventus president, a young, fresh-faced Andrea Agnelli.

There is a controversial moment a short while later when Couto, having earlier returned to the field, rises to challenge Baggio (of all people) for a header and gets acquainted with his elbow. Sending him once more crashing to the floor, Parma players race to the referee while Vialli and Ravanelli shepherd Baggio away from the melee. Looking at the incident again, had it taken place today he most likely he would have been sent off, even if it were accidental. No stretcher needed for Slash this time however and he gets back on his feet to soldier on.

After their slow start Parma are beginning to have more possession and look more threatening when Juve score a beautifully worked second goal in the 38th minute. Zola’s poor control of the ball inside the Parma half leads to a combined sliding tackle/pass from Deschamps to Ravanelli, who takes a touch and slips a pass into Baggio who makes a diagonal run into the box.

Followed by Mussi, the Divine One waits for the onrushing Deschamps and beautifully back heels the ball into his path. The world’s most famous water carrier produces a finish worthy of Juve’s front three when he bends his shot into right hand corner of the net. It was his first goal of the season and one of only four he ever scored for the club.

Following the goal the Bianconeri are passing the ball with real precision and incision as they look to add a third and kill the game but the referee blows for half time. Ravanelli, Baggio and the criminally underrated Sousa have been the standout players in the opening 45 minutes.

As the second half begins there is another commotion between players as Zola, one of the most harmless players on a football pitch, fouls an outrageously young looking Alessio Tacchinardi (who remarkably is playing in central defence). He takes exception to the challenge and the pair have to be pulled apart with Zola adamant there was no malice in the challenge.

The clock ticks down with Parma attempting to force the game but simply cannot break down the Juve rearguard. In the 68th minute the win is sealed beyond all doubt when Vialli adds the killer third.

Yet another Parma attack fails as Porrini gains possession of the ball, he passes it to Ravanelli who lets the ball run across him and plays a first time ball into the feet of Baggio just inside Juve’s half. The Vicenza native carries the ball, waiting for Vialli’s forward run and plays a gorgeous through ball inside Couto into his feet, the no.9 surges into the box, brushing Minotti aside with absolute ease before firing home with his left foot, his 16th goal of the season. Game well and truly over.

The game has now descended into a carnival atmosphere, with the noise decibel increasing with every passing minute, and four minutes after Vialli added the third, Juve net a fourth.

The brilliant Sousa plays a sublime fifty-yard diagonal pass to Vialli who has got in behind the Parma defence on the right hand side, he takes the ball to the byline before cutting it back for his strike partner Ravanelli, who has ghosted ahead of Minotti and Couto to the front post and with ease guides the ball into the net with his weaker right foot. The striker runs over to celebrate with Lippi, who undoubtedly got the best out of him, this was his most prolific season with Juve, hitting 30 goals in all competitions and 15 in the league.

As the game resumes, every Juventus pass is greeted with a ‘’hooray!’’ from the crowd as the party atmosphere continues, the pace of the game doesn’t drop as the tackles are constantly flying in from both sides. Rampulla pulls off a fine save to deny Crippa and several minutes later Bucci (who is found guilty by the fashion police for his hideous jersey) dives to deny Vialli from rounding him and scoring a fifth. There is a moment where the raucous crowd goes silent as Baggio collects the ball and starts to go off on a classic Baggio slalom run, beating several players before being surrounded by one too many and is dispossessed.

Ten minutes before the end Baggio – arguably the best player on the pitch as he expertly played in between the lines and was involved in three of the four goals – is taken off for a bushy-haired Alex Del Piero, who wouldn’t amount to much in the black and white. Either side has chances to score as Ravanelli narrowly misses completing his hat trick with a diving header and Zola inexplicably misses an open goal from three yards out.

Referee Cesarini blows the whistle and Juve’s torturous wait for the Scudetto is over, players and backroom staff flood the pitch to celebrate. Juventus would finish the season ten points clear of Lazio and Parma, who finished 2nd and 3rd respectively on goal difference. The title was dedicated to Juve defender Andrea Fortunato, who tragically died of pneumonia the previous month.

The two sides would do battle again merely weeks later in the final of the Coppa Italia, then a two legged affair, with the Bianconeri again emerging victorious, winning 3 – 0 on aggregate and completing a domestic double. The club hasn’t won the Coppa since.

The Lippi era was well and truly in full swing. It was a classic Serie A season, it was the season of the Bianconeri and the Ducali, and it was glorious.