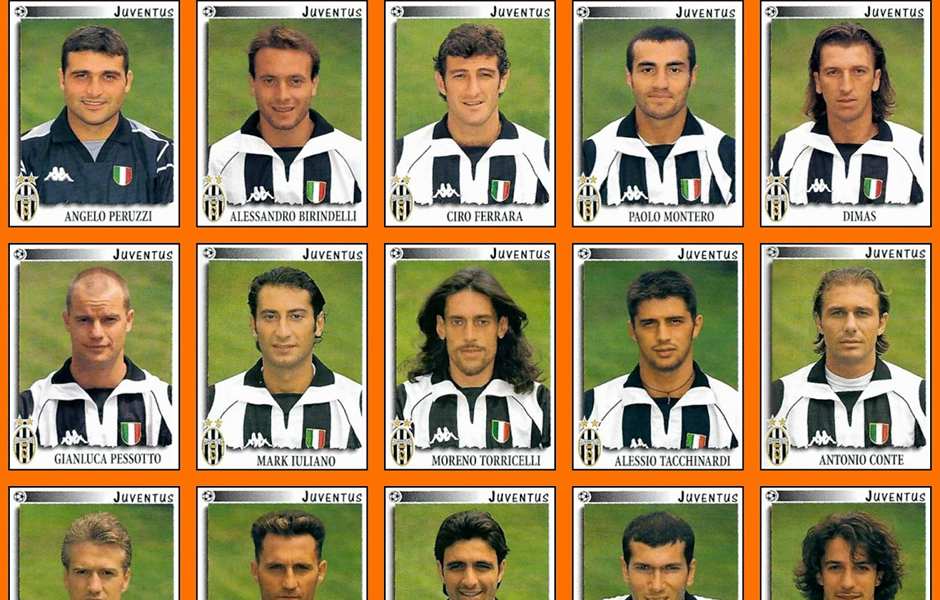 February 8th 1998, Titanic is currently sitting atop the US box office on it’s way to becoming the highest grossing film of all time (whilst being one of the great cinematic bores of recent times). The Backstreet Boys are no.1 in the UK singles chart and in round nineteen of the 1997/98 Serie A season in Italy, reigning champions and arguably the most feared team on the planet – Juventus, welcomed Zdenek Zeman’s enterprising Roma side to the pleasant delights of a bitterly cold Stadio Delle Alpi.

La Vecchia Signora were striking blow-for-blow with a Ronaldo-inspired Inter for Lo Scudetto and were going into this meeting with Roma with only one point separating 1st and 2nd. Both teams had won the previous weekend, Juve winning away in Leece and Inter leaving Brescia victorious.

The Giallorossi were also victorious in the previous round, beating Empoli 4-3 in a classic Zemanlandia match. They were sitting further aback in 7th position but held aspirations of getting back into Europe. This was a game neither side could ill afford to lose.

Marcello Lippi’s men were at full strength with the exception of Ciro Ferrara who suffered an injury in the defeat of Leece. Roma were without a certain Francesco Totti, then only a sprite 21 year old, who remarkably sixteen years later will participate in the same encounter. He was also out through injury. 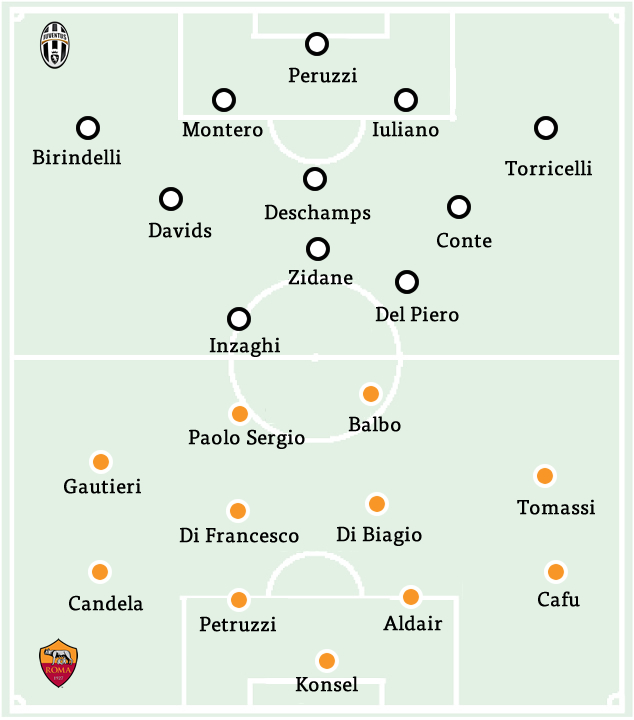 Juve have a chance in the opening minute as captain and future manager/deserter Antonio Conte intercepts a loose ball in the middle of the pitch and passes to the hypnotic feet of Zinedine Zidane, who in one moment swivels and bends a pass down the right hand channel into the path of Pippo Inzaghi.

Inzaghi races towards goal with Aldair in hot pursuit, Inzaghi runs into the box and turns Aldair, forcing the legendary Brazilian to slip. Just as Pippo is about to pull the trigger Roma stopper Michael Konsel springs into action and dives forward to save the shot. An early warning sign of what lay ahead for the Austrian international.

Moment’s later, best friends Inzaghi and Del Piero combine for a glorious chance that the Juve no.9 somehow contrives to miss. Cafu on the left hand side of the pitch fouls Del Piero from behind. He gets up and dusts himself off to swing in a set piece to the far post for his strike partner, who is no more than five yards from goal. Pippo directs his header straight at Konsel who makes a fine reflex save and catches the ball at the second attempt.

At this stage of his career Inzaghi wasn’t the refined goal-scoring machine he later became at Milan. He would make it a habit of missing several chances in a game before scoring a goal, much to the annoyance of the Juve faithful.

The pace of the game is completely relentless, akin to a current Premier League game, the ball going from box to box in a matter of seconds. Just as it seems like the referee will blow for a goalless first half, Juve score.

Zidane plays a neat ball into the feet of Inzaghi, who lays it off for Conte, the captain loses control but along with Torricelli battles at the edge of Roma’s area to regain possession, the ball lands to inzaghi, who sharply turns Candela and it falls into the path of the onrushing Zidane, who slots it past Konsel with his instep. The finish was beautiful, the build up not so much.

As the teams appear for the second half Lippi has made a change, Inzaghi has come off for Angelo Di Livio – the epitome of industrious. The change I suspect is a tactical one as Inzaghi showed no sign of injury during the first half, Juve now shifting to a 4-4-1-1 formation.

Two minutes into the second half Juve double their advantage with an absurdly comical goal. Di Livio, delivers a long ball down the right hand channel for Del Piero to chase, who controls it with his left foot, attempts to take on Petruzzi on the periphery of the box. He gets a stroke of luck as the ball bounces off Petruzzi’s leg into his path. He tries to square the ball to the onrushing Davids, but the ball ricochets off Cafu’s legs, which forces Konsel to make a reactive save, the ball once again falls back to the no.10 and he slots it in with his left foot. A goal worthy of the player it was not.

Immediately after the goal Roma come into the game and begin to look more threatening, in the 57th minute they pull a goal back. Aldair plays a long horizontal ball into the Juve area for Tomassi, whose volley is blocked by the ever tenacious Montero, the balls falls to Gautieri outside the box, who pulls it back for Di Biagio to strike.

Paulo Sergio inadvertently blocks his attempt, the Brazilian gets the ball under control and stabs it under the arm of Peruzzi for his 5th goal of the season. Game on.

Roma were now in the ascendency and shortly after their goal there was major controversy. The ever-attacking Cafu slalomed down the right hand side before passing to Tomassi, who went inside and lost the ball to Davids, who in turn lost it to Guatieri, the ball is ping-ponging among three or four player before Tomassi emerges with the ball and slides it through to Guatieri who runs into the box.

Deschamps makes a lunging tackle and takes nothing of the ball, bringing Guatieri crashing to the ground. It was a stonewall penalty but the referee turns away and waves play on. Roma players are furious and surround the referee. A melee breaks out between both sets of players with Montero (as one might expect) stuck in the middle of it.

With Roma feeling understandably aggrieved, the tone of the game turns nasty, as Petruzzi is booked for scything down Del Piero and earns a yellow card.

No more than two minutes had passed since he received his first yellow card, Petruzzi got himself a second. Deschamps played a through ball for Del Piero. The Padova native nipped in behind Aldair and was running towards goal when the defender grabbed him by the arm and pulled him to the ground. Petruzzi and several Roma players surprisingly run to the linesman to remonstrate but it was unquestionably a bookable offence.

From the resulting free kick, Del Piero rolls the ball across for Davids, who had just signed in December from arch-rivals Milan, who cannoned a left footed shot past the wall and into the net via the post. It was his first goal for the club.

Juve’s third goal knocked the wind out of Roma’s sails and the last twenty minutes of the match passed without incident. There was however a lovely moment when current Sassuolo manager Di Francesco tries to dispossess Zidane of the ball near the center circle, but Zizou in classic Zidane style elegantly keeps hold of it even though he’s getting dragged to the ground, the ball sticking to him like velcro.

Domenica Messina blows the whistle to end a hard earned victory for The Old Lady. It would be a happy weekend for the Bianconeri as Inter lost at home to Roberto Baggio’s Bologna. With future Juve defender Michele Paramatti scoring the only goal. The gap had now widened to four points.

The ebb and flow of the title race continued until April, when Juve emerged victorious against Inter in that game at the Delle Alpi and once more opened the gap at the top to four points, two weeks later they mathematically won the title at home to Bologna due to Inter losing away to Bari.

As for Roma, they could justifiably feel wronged. How the referee didn’t blow for a penalty is beyond me, psychological refereeing at play perhaps? Watching it back there are shades of the Ronaldo-Iuliano incident that would happen a couple of months later. The outcome of the game and maybe even the season could have been different had Roma been awarded the penalty and scored. They finished the season in 4th position and qualified for the UEFA Cup.

The real legacy of the game would originate a few months later, when Zeman accused Juventus and it’s players of systematic doping, thus starting an investigation and later a trial in 2002. The vast majority of the 1997/98 team plus former players Gianluca Vialli, Fabrizio Ravanelli and Roberto Baggio had to testify in court.

Eventually the club was acquitted but the club’s team doctor, Riccardo Agricola, was found guilty and sentenced to 22 months in prison. A year later he was cleared of any wrongdoing on appeal.

The damage to the club’s image was not as bad as what the iceberg did to the Titanic over a century ago, but Zeman ultimately got the last laugh, as that great Juve side under Lippi to some will always have an asterisk beside it.