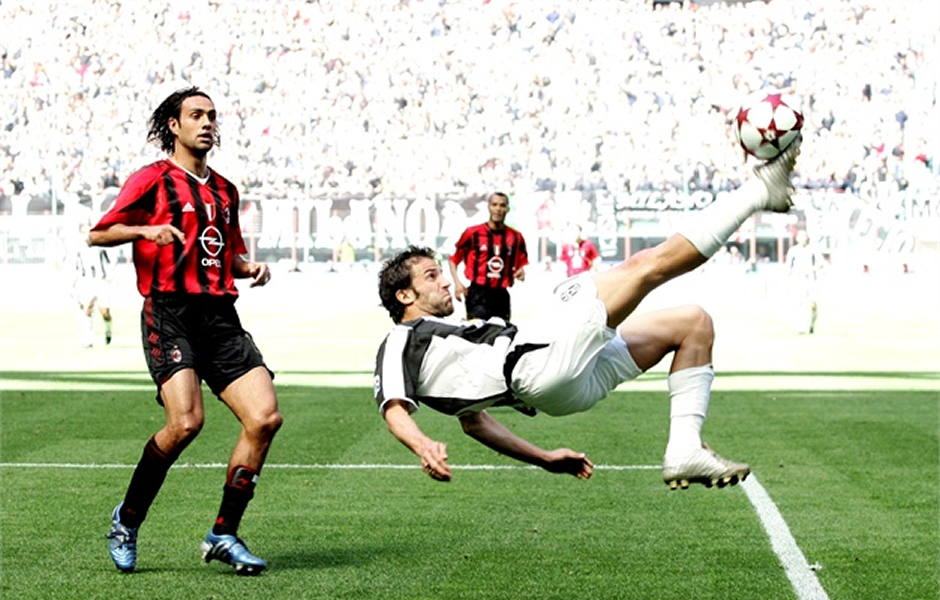 There are certain football matches that are immediately defined as ‘classics’ from the instant the final whistle blows, other matches are coined ‘a classic’ much later on, when viewed through the prism of history.

The clash between Milan and Juventus on a glorious sunny afternoon in May 2005 with 79,000 people in attendance (including yours truly at his first Serie A match) undoubtedly fits into the latter category. The two sides had been involved in a gripping fight for the Scudetto all season, with four games left of the 2004/05 Serie A season and with both sides level at the top with 76 points each, this was seen as the title decider. The stakes couldn’t get any higher.

Going into the match the Bianconeri had the advantage of a weeks rest, having been knocked out of the Champions League by Liverpool at the quarter-final stage, they had no distractions at this point in the season. Milan on the other hand spent a part of their week in Holland for a semi final showdown with PSV Eindhoven in which they narrowly won on away goals after being comprehensively outplayed over 90 minutes.

Both sides were at full strength give or take (looking at Milan’s side, it’s particularly heartbreaking considering their current batch of players). Juve had top scorer Zlatan Ibrahimovic missing through suspension so Alex Del Piero came in to partner Trezeguet up front. The San Siro turf was littered with world-class players (and Jon Dahl Tomasson). Even the referee was the best in the business, in the presence of Pierluigi Collina. 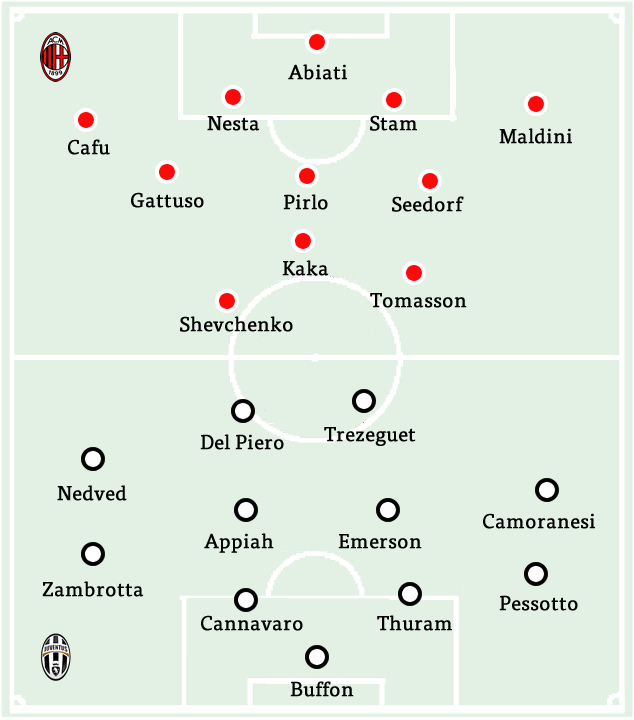 The opening stages were as anticipated very cagey, with both teams struggling to find any rhythm. The most notable incident was Pavel Nedved tackling Andriy Shevchenko near the center of the pitch and in the process putting his studs through the leather of the ball, forcing Collina to ask for another.

Juventus as expected were the fresher of the two sides and it showed, as Milan looked a little sluggish. There is a minor scare for The Old Lady in the 20th minute, as a babyish-looking Kaka plays a beautiful through ball into the path of the onrushing Shevchenko, by some distance the finest striker on the planet at the time and who struck the fear of God into every goalkeeper he bore down upon.

Except for Gigi Buffon, who comes out to meet the Ukrainian, whose touch was a tad heavy and is forced to try and go around the Juve no.1. Gigi delays diving and Sheva is forced away from goal and attempts to pull it back for Tomasson, but Buffon shows superb reflexes and deflects the ball away.

No team is keeping possession particularly well as the ball is going back and forth, then suddenly with the first shot on goal from either side in the 28th minute, Juve score a spectacular goal.

Appiah (watching the game back now, I completely forgot he even played) receives the ball just outside his own box, he strides some four or five yards before lofting a ball over to the left hand side of the pitch for Nedved to chase. The Cezch races towards the ball with Nesta, who for some peculiar reason has took it upon himself to try and win the ball from his former Lazio comrade. Nedved reaches the ball first and keeps it in play but is met with a crunching tackle which sends him hurtling to the ground over the touchline. 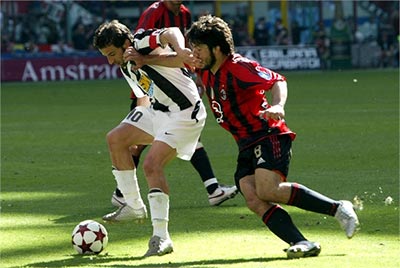 The ball has now travelled down the left hand channel of the pitch where Del Piero takes control, the gnarling menace that is Gattuso comes charging over but Alex skips past him and makes his way towards the box. Correctly sensing that Gattuso won’t be too far behind him, he swivels and twists in an attempt to shake off the raging bull.

ll Pinturicchio makes a yard of space and attempts to cross, which is blocked by Gattuso’s leg, the ball spins into the air back towards the edge of the box. With the ball now behind him, he instantly turns around and executes an overhead kick into the six-yard box.

David Trezeguet, quiet in the match up to this point and ever the supreme opportunist, darts in front of Maldini into the gaping hole that Nesta had left vacant by his earlier escapade up the field to head the ball past an advancing Dida. The Milan stopper can only get a hand to the ball as it spins, almost in slow motion into the net. Trezeguet runs and sinks to his knees to embrace the Juve no.10. 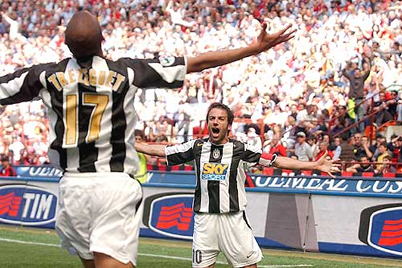 Del Piero’s moment of ingenuity and overall performance was vindication for a man who had experienced a tough campaign. He was substituted a record 26 times in the season by Capello, who continued his notorious indifference for no.10s. For the first time in a decade the Juve captain wasn’t assured of a first team place and was now considered behind Ibrahimovic and Trezeguet in the pecking order.

It’s difficult to even contemplate now but Del Piero for the first time pondered leaving the club. In the summer of 2006, when Capello had jumped ship to Real Madrid in the wake of Calciopoli, Del Piero lambasted his former coach. ‘’My relationship with Capello was not rewarding from many points of view, not only because I was little used. We had a different way of seeing things, and with him still on the bench would have been very difficult for me to stay at Juventus’’

As the game resumed and edged towards half time, it became more fragmented as the niggling fouls increased but the tempo remained consistently high. The game was still firmly in the balance as Collina blew his whistle for half time.

As the teams emerged for the second half Ancelotti had decided to make a change. The ineffectual Pirlo was sacrificed to make way for Serginho, who would provide more width down the left hand side for the Rossoneri as they now lined up in a 3-4-1-2 formation.

The start of second half continued much in the same vein as the prior 45 minutes, Juve were compact and easily handling anything Milan mustered up to throw at them. Ancelotti decided he had seen enough of Tomasson in the 59th minute and replaced him with Pippo Inzaghi. Who was in the midst of a two-year injury nightmare (he only played 25 league games from 2003 to 2005).

Inzaghi had been on the pitch no more than two minutes when he spurned a glorious chance to level the game. Gattuso robbed Camoranesi of the ball deep in Milan’s half, Serginho then took hold and sprayed a beautifully precise ball over the top of Thuram into Shevchenko down the left hand channel.

Shevchenko squares the bouncing ball to Inzaghi with the outside of right boot. Inzaghi, now marching down on the goal, has to hit it first time. However Buffon, alert as always, comes rushing off his line and the Milan striker fires his shot straight at the custodian. It was Milan’s first shot on target.

The danger isn’t over as the ball bounces back into Pippo’s path off the goalkeeper’s legs, the ball is bouncing away from him as he tries desperately to steer it in but Zambrotta comes dashing behind him and exerts enough pressure on Inzaghi to prevent him from scoring as both of them crash into the base of the post as the ball trickles wide.

In the 64th minute the away side win a free kick when Gattuso in typical fashion bundles over Nedved some 35 yards from goal. ‘Furia Ceca’ delivers a bending free kick on to the head of Del Piero, whose effort smacks off the crossbar with Dida rooted to the spot.

As the game wore down to its final minutes, Milan threw everything at the Juve rearguard, but they valiantly defended in a manner rarely seen today. Even the introduction of the outrageously elegant Rui Costa amounted to little. Zambrotta and Thuram threw their bodies at any shot Milan had and Cannavaro was giving a prelude to what he would produce a year later at the World Cup with a masterful performance.

As Collina blew the final whistle after five tense minutes of injury time the Juve bench ran on to the pitch in celebration, for they knew this was the killer blow to their opponents title hopes.

With three games remaining, Juve were now three points ahead and with the easier fixture list (Juve had Parma, Livorno and Cagliari left to play), most recognised that the title was going back to Turin.

Ancelotti and captain Maldini refused to concede the race was over, after the game the former Juve manager said ‘’ A draw could have been a more fair result…we’ll keep on fighting through the end for the title.’’ While Maldini added ‘’the title race is not finished, sure, the win gives them an undeniable advantage…on paper they have an easier run-in but nothing is certain yet’’

The race officially ended the following week when Juve as expected beat Parma 2 – 0 at home whilst Milan could only draw 2-2 down in Leece, with future Juve player Mirko Vucinic scoring the late equaliser that confirmed Juve as champions for the 28th time.

So why is this match considered a classic? The spell-binding title race aside, the encounter was arguably the last great one played in a league in the last vestiges of its greatness, the Serie A that we all fell in love with. The match had the air of a modern El Clasico, with a plethora of world-class players lining up either side, at the time a who’s who of world football. It would be no exaggeration to say there were more world-class players in the Milan team alone than there is currently in the league (they could afford to leave Hernan Crespo, Inzaghi and Rui Costa on the bench). It was a tense yet enthralling game.

Within a year it would be all be over, the FIGC decided to decapitate its own league by ridding itself of its best team while Milan sold Shevchenko to Chelsea, signalling the start of Berlusconi’s declining interest in his team. Serie A has never truly recovered.

Both sides haven’t been equally as strong for nearly a decade. Lets hope for the good of Calcio that Milan return to their rightful level. Juventus haven’t had a worthy sparring partner since.