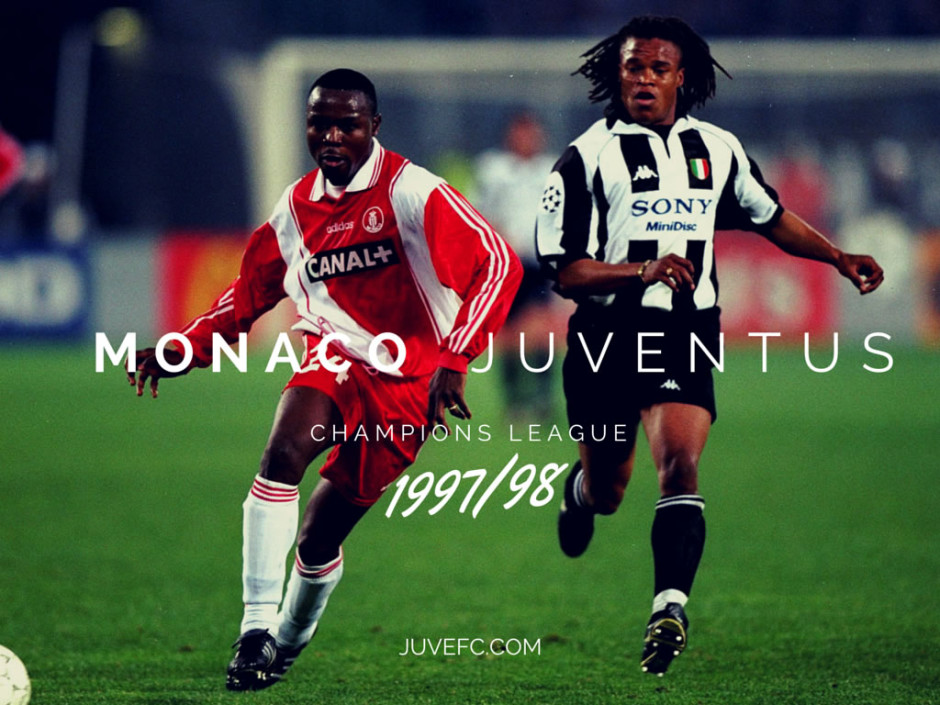 With the second leg of Juve/Monaco looming ever closer, we take a look back at the last, and at this point only, second leg to be played between these two sides, which took place on April 15th 1998.

Following the 4-1 destruction of the French side two weeks prior, Juve had played two matches in Serie A, winning against Lazio and Piacenza, and not conceding a single goal in the process while still keeping their noses in front of Inter in the title race by a solidary point.

Monaco meanwhile had drawn their last league encounter with Nantes 1-1 and were now out of their own title race, all their energy was now focused on trying to overcome the first leg deficit and become the first French side to reach the final of the Champions League since Marseille five years earlier.

Both sides underwent some changes since the first game. John Collins returned to the Monaco starting XI, while Willy Sagnol was dropped in favour of soon to be Juve flop Thierry Henry. Jean Tigana, feeling that they had nothing to lose after the first leg pummeling, switched his system to 4-3-3.

Marcello Lippi also did some rotating from the game in Turin, midfield pitbull Edgar Davids was on the bench, replaced by Alessio Tacchinardi. Didier Deschamps was absent and in came Antonio Conte, Angelo Di Livio was likewise on the bench and replaced by Alessandro Birindelli. In defence the Uruguayan nice guy that is Paolo Montero was missing, so in his place came Dimas. 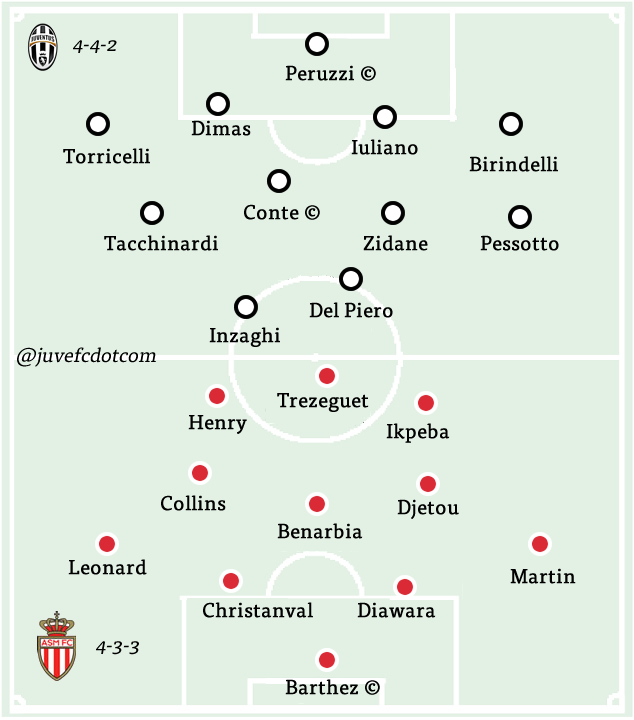 It’s close to a sell out crowd at the tiny Stade-Louis II stadium on a rainy Wednesday night.

Within the opening five minutes the away side has to make a change, Inzaghi challenges for the ball with Diawara from a Peruzzi goal kick but somehow lands awkwardly, resulting in a busted mouth. After several minutes on the sidelines receiving treatment the medical staff decide Inzaghi can no longer continue, and Nicola Amoruso takes his place.

Monaco make Peruzzi work from the get go with Leonard forcing a great save from the goalkeeper after taking a short corner from Bernarbia. The tackles are being meted out from both sides, first with Torricelli making a crunching tackle on Henry, and Del Piero getting the same treatment from Martin some minutes later.

With the match flowing from end to end Juve take the lead in the 15th minute, Monaco’s two antagonists from the first leg, Zidane and Del Piero, once again inflict further damage. Zizou pokes the ball around the diving Djetou in the center of the pitch and strides forward before chipping the ball to his left to Del Piero. The no.10, who looks majestically wearing the white Adidas Predators boots which were still quite rare, even for the late ‘90s, effortlessly skips past Diawara on the edge of the box with some neat footwork before squaring it to Amoruso in the center of the penalty box who casually slots it in with his left instep, it was his first touch of the ball. Juve now 5-1 ahead on aggregate.

Following the restart of the game there were a few worrying moments for Juve as Del Piero was lying crumpled in a heap on the right hand side of the pitch following a challenge with Leonard. Moments later Monaco should have scored as Peruzzi made a remarkable save from a point blank Benarbia header after a great cross from Martin. Somehow it’s still 1-0 Juve.

As the rain increases so to do the Monaco attacks and Peruzzi is constantly foiling the opposition players, Juve are now camped in their own half as Monaco’s pressure pays off and they equalise.

They win a free kick some 25 yards from goal, Leonard takes a long run up and hits it into the wall. It was a poor free kick in truth however it takes a huge deflection off Dimas, with Peruzzi having already committed to going the other way, he scrambles across his goal but it’s too late and the ball travels into the corner.

After more relentless attacking from the French team, the Swiss referee, Urs Meier, gladly for Juve calls time on the first half.

The second half started much in the same vein as the first half had ended, with Monaco peppering Juve’s goal. Collins works the ball to Benarbia on the periphery of the Juve box, who attempts to cross the ball into the box but it takes a huge deflection off Tacchinardi and is about to creep into the Juve goal only for Peruzzi to somehow make a last ditch save and he pushes it out for a corner.

Monaco continues to bombard forward and they take the lead through Henry. Zidane gains possession just outside the Juve box and attempts a counter, but he loses the ball just as quick and it falls to Henry, Juve attempt to push up and force offside however it fails and Henry runs through unopposed and chips the ball over the onrushing Peruzzi. 5-3 on aggregate.

From the kick off Juve go straight up the other end and Zidane forces a great save from his compatriot Barthez, who up to this point hasn’t had a lot to do in the game.

The game is now becoming stretched and swings from side to side and in the 74th minute Juve once and for all burst Monaco’s already slim hopes of qualifying for the final with a stunning goal.

Torricelli plays a one-two with Tacchinardi down the left hand side of Monaco’s half and the right back races towards the byline before crossing the ball to the opposite end of the box where Del Piero is lurking behind Martin.

The no.10 waits for the high ball to drop from the rain-soaked sky and then executes a marvelous volley that takes a deflection off the Monaco defender, adding more velocity and it flies past Barthez, who could do nothing to stop it.

The games against Monaco represented something of a watershed moment in the career of Del Piero. In the two games he scored four goals and assisted the two he didn’t score. He was having the best season to date and would score 31 goals in all competitions.

Arguably the most feared player on the planet alongside Ronaldo, after the Monaco tie he would never be the same player again. He disappointed in the final against Real Madrid in Amsterdam whilst picking up a hamstring injury during the course of the game. He went into France ’98 struggling for fitness and played poorly in the tournament, losing in the media invented ‘duel’ against a remerging Roberto Baggio.

The injury in Udine in November 1998 completed a horrid six months. When he returned in the summer of 1999 his injury robbed him of that burst of acceleration and agility that made him so devastating in 1997/98 and whilst still a good player, he would never become the true heir to Baggio that club and country both hoped for. At only age 24 he would never be the player of ‘old’.

Following Juve’s second goal, Monaco once more piled men forward in the hope of at least claiming a victory on the night, and with seven minutes remaining they got their third goal. Substitute Robert Spehar looping a header in from a Martin cross over Peruzzi.

The Italian goalkeeper was unquestionably man of the match as he kept Monaco from scoring further as the clocks winds down. Juve are all at sea as Meier blows for full time and Juve are in their third consecutive Champions League final.

The 1997/98 version was Lippi’s most free scoring of sides in his first spell at the club, Del Piero, Zidane and co plundered 23 goals in the Champions League and scored more in the league than in any of Lippi’s three previous campaigns.

Juve went into the final against an ordinary Real side as huge favourites after securing another Scudetto, finally seeing off Ronaldo’s Inter, yet froze once more on the biggest occasion and lost to a Predrag Mijatovic goal in the second half.

The redemption for the loss to Dortmund a year earlier wasn’t to be, and for Juventus and Marcello Lippi, it would never happen.

Maybe Max Allegri’s boys can change that this season.