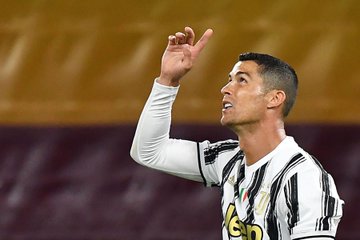 Juventus battled on for a hardened draw despite a red card against Roma in Serie A.

Juve started the game slowly, but after being on the backfoot during the early exchanges we really began to pile the pressure onto our rivals.

Our pressure didn’t equate to a goal however, and the game changed after Adrien Rabiot blocked the hosts shot from inside the box with his hands up, and the penalty was given.

French midfielder Veretout stepped up and just beats Wojciech Szczęsny to his right, but we continued to push on.

Shortly before the break, Cristiano Ronaldo runs at the defenders, passes one, and tries to pass to his team-mate from inside the box, only for Pellegrini to leave a low-hanging arm out to block the ball, and another penalty is given.

CR7 of course makes no mistake in putting the spot-kick away, and we looked destined to go into the break with a deserved level score.

That wasn’t to be however, as Roma put in motions a devastating counter-attack which saw Veretout get himself on the scoresheet once more, breaking ahead of the defence to beat the keeper one-on-one.

The game started to get theatrical shortly after the second-half, with shirt-pulling and soft fouls escalating.

Alvaro Morata had a relatively quiet game, despite getting into some nice positions, and it wasn’t too much of a shock to see him make way.

Pirlo tried to change the match just before the hour-mark, by taking off both Morata and Weston Mckennie, and replacing them with Douglas Costa and summer signing Arthur.

The Old Lady will have to consider themselves a little on the lucky side after watching Edin Dzeko retrieve the ball close to the six-yard box, only to take one too many touches before firing onto the outside of the post, from a distance that any professional footballer should really be hitting the target.

The manager may regret taking off McKennie moments later however, as his partner in midfield Adrien Rabiot gets himself his second yellow of the game shortly after the switch, and reduces our side to 10-men.

Rabiot was our only man sitting on a booking, which is frustrating enough…

The former PSG youth product is reprimanded for taking out Henrikh Mnkhitaryan, and once again, there is little to argue against the referee’s decision.

The team refused to lie down despite the deficit however, and within seven minutes of losing a man, we are level once more.

Ronaldo leaps high to latch onto Danilo’s fine cross to put the ball past Mirante, and it is game on again.

We tried our hardest to get a winner, but Roma remained resilient, and the game eventually settles down for a draw.

The hosts will have to accept that they were not good enough to beat the Old Lady despite a one-man advantage for nearly half an hour, but they will be happy to actually earn a point after having their last draw overturned, due to an embarrassing admin error.

Will Pirlo need to assess his selection, or were we unlucky with the decision which may have played a factor in the result?