Juan Cuadrado innocently exposed the training programme of some Juventus players in a picture he took with Weston McKennie and posted on his Instagram account.

The Colombian seemed overly excited after Juventus’ draw against Inter Milan last weekend and mocked the outfit of McKennie.

He took a picture with the American who wore an outfit that Cuadrado said looked like he worked for McDonald’s.

However, what he failed to notice is that in the background, there was a screen showing the training program of several Juve players, according to Sky Sports.

They zoomed in on the image and it exposed the training plans for Giorgio Chiellini, Danilo, Alvaro Morata, Alex Sandro, Leonardo Bonucci, Manuel Locatelli, among others. 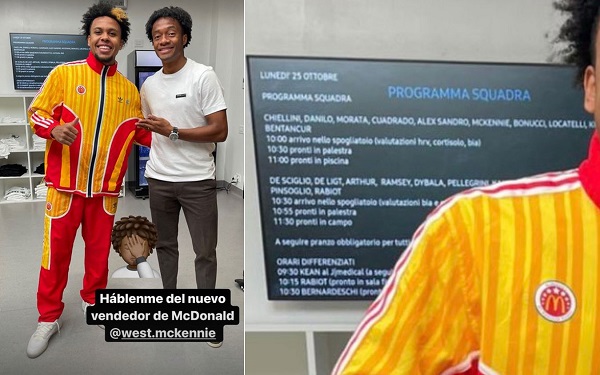 This is nothing serious and Cuadrado would have to be more careful about the backgrounds where he takes images at the club from now on.

The Colombian remains one of the key players at the club, with his versatility helping him to thrive in attack and defence.

Massimiliano Allegri has great faith in him and he could be in line to sign an extension to his current deal.

Juve’s next match would be against Sassuolo, which would see Manuel Locatelli face his former club.

It is a tricky match, but the Bianconeri should get back to winning ways after the draw at Inter.

De Jong to Juventus? One player could make that transfer happen