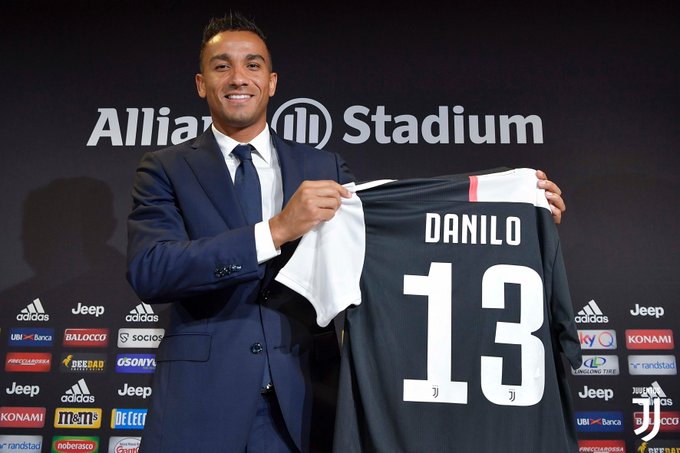 Danilo: ‘I spoke to Ronaldo and Sandro about Juve’

New Juventus signing Danilo revealed that he spoke with both Alex Sandro and Cristiano Ronaldo  who told him great things about joining Juventus.

The Brazilian full-back joined the Bianconeri as part of the move that saw Joao Cancelo join Manchester City in exchange.

“I am happy to be here and received a very warm welcome,” said the Brazilian in his presentation Press conference.

“Sandro? Of course, I spoke to him during the negotiations, he gave me some very precise indications on the club, the philosophy and how they work here. Alex Sandro is an important person for me, we’ve been friends for 10 years, so clearly his presence helped.

“It’s true, I had been in some talks with Juve in the past, but I believe this is the right time to be here.

“Every right-back is inspired by Dani Alves and not just the Brazilians. He is a player who really motivates his teammates and has won everything. I hope we can continue to bring a positive Brazilian influence to Juventus with Alex Sandro and Douglas Costa.

“I like Sarri’s style of football and I don’t think I’ll have difficulty adapting to what he is asking for. I know that defending is very important in Italy, but I am 28 years old and open to learning anything that I need to become a better player.

“Sarri asked me to be careful when defending, but also to play with freedom and express all my potential going forward. He likes to control the game with possession and I know from facing them that his Napoli and Chelsea were very difficult opponents. I am ready to learn and evolve every day.

“Every moment is important to help forge you as a player. Although I didn’t play the way I wanted to, these last four years were fundamental and will help me have the right mentality here at Juve.

“Cristiano? We joked around and I told him that I wanted the Number 7 shirt, but it was already taken! He welcomed me to Turin with a smile and said I have arrived at a magnificent club. Playing alongside stars of his level gives you extra motivation.

“Cristiano spoke about this club as like being a big family and that really drew me here. We have everything we need in Turin to be very happy and you can see how content he is here.

“In the end, I chose Number 13 because I believe in numerology and 13 represents renewal and opening up towards something new.

“I know the Champions League is an objective for many big clubs, but our target must be to play every competition with the same attitude and focus. I’ve never seen a winning team face one game in a different way to the others.

“Every Coach has his particular ways. Both Guardiola and Sarri have a well-defined tactical approach, as they both want to take the initiative and control the tempo.

“The key with a tactician is also the way he deals with the squad and I saw an excellent attitude from Sarri. I really liked it.”

Ronaldo: ‘Messi didn’t play with more than one club’