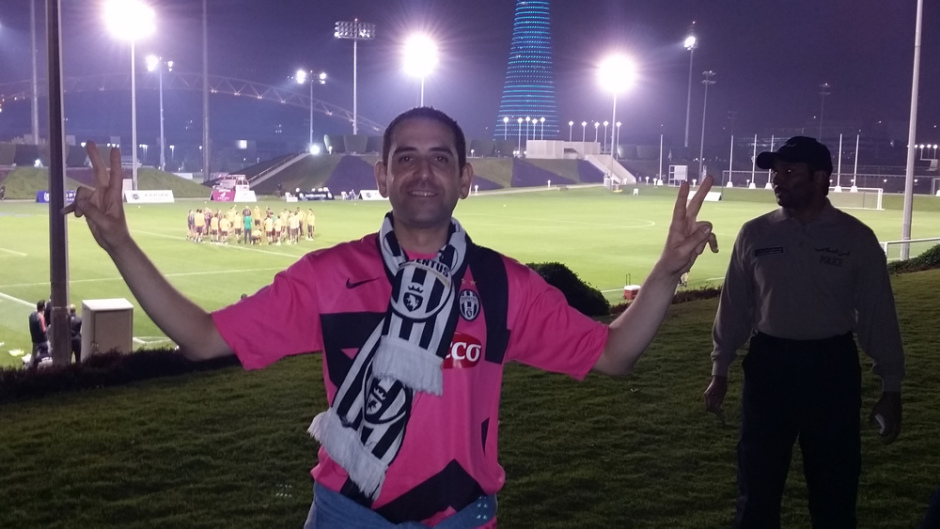 Juventus are in Doha ahead of  tomorrows Italian Super Cup match against Napoli and Amin Muwafi was lucky enough to catch up with the players.

Following and tracking all news related to Juve and being a member of the Juventus DOC Club in Qatar, we were able to access more information about the agenda of Juventus, their arrival time, training sessions and other information.

We were around 50 people cheering Juventus at the arrivals terminal at Hamad International Airport. The players didn’t approach us but were so friendly in taking photos and signing T-Shirts with them. We had the pleasure to communicate with them, take photos, and wish them luck in the match. People were very professional in dealing with the players in which each one respected the other while taking their photo. When the Capitano Buffon arrived at the terminal, he went to each person, signed a T-Shirt, took a photo, or shook hands with them; he spent a good time with each and every one.

Afternoon, and the team had the first training session at Aspire and lots of people were there to have the chance to take photos with the players. Most players were getting out of the hotel, one or two at a time and that allowed them and us to take photos with each of them. Some of the players as Vidal, Tevez, and Buffon came out late and informed they’ll take the photos after the training session is completed. I think most people there were able to take a photo with each single player. The security people were very professional and communicated with us in a professional way ensuring several actions as not touching the players and standing on a certain point; the cooperation of the people all around helped to achieve this point, and I think this is a great advantage for Doha in handling people which will give them more push to a great World Cup in 2022. @aminmuwafi

Gianluigi Buffon: “I didn’t know there was a Juventus Club Doc in Qatar and must thank them for making us feel special and loved.”