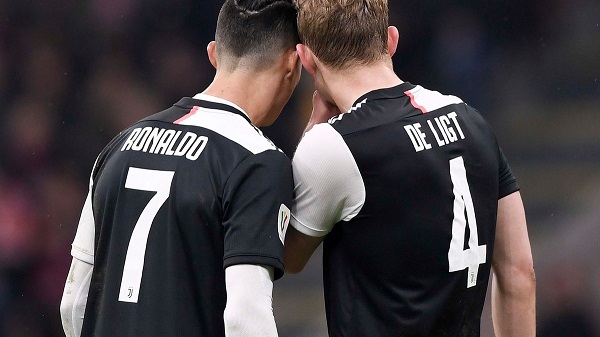 Despite leading the Ajax senior team at the tender age of 18, Matthijs de Ligt has always kept his feet on the ground.

The young center back made a sensational transfer to Juventus at 19, and yet, he still maintained his humble approach.

However, the man himself has criticized his own behavior, claiming that perhaps he’s been too respectful towards his veteran teammates in Turin.

The Dutchman joined a locker room that featured the likes of Cristiano Ronaldo, Gianluigi Buffon, Paulo Dybala and Giorgio Chiellini.

But after looking back, he now believes that he could have taken things a bit more lightly.

“At the beginning it was complicated, because I am a very respectful guy,” admitted the 22-year-old in interview with Paramount Plus via ilposticipo.it

“At times maybe I had been too respectful with some of them, like Cristiano Ronaldo and Buffon. You have to understand that you are all part of the same team. others become colleagues or even good friends.”

On the other hand, de Ligt praises Weston McKennie and highlights his positive impact on the team. The American midfielder is one of the most colorful characters at the club, and can effortlessly put a smile on his teammates’ faces.

“Mckennie is certainly the nicest. He seems to live in a world of his own. He has a lot of fun. Since he arrived, things have improved a lot, on and off the pitch.”