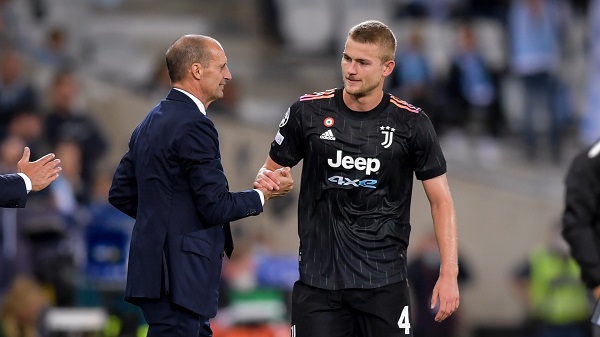 De Ligt hints at having a problem with Allegri

Matthijs de Ligt pushed to leave Juventus this summer and it came as a surprise to some fans because they had expected the defender to stay and become the club’s main man at the back now that Giorgio Chiellini has left.

He continued his development at the club and was the first choice centre-back under Maurizio Sarri and Andrea Pirlo.

However, when Max Allegri returned last season, he preferred the partnership between Chiellini and Leonardo Bonucci.

That didn’t seem to go down well with De Ligt and the defender discussed it in a recent interview.

“Last season, for the first time in my career, I had two coaches, Louis van Gaal and Massimiliano Allegri, who didn’t put me in the starting lineup and didn’t feel confident.

“Before that, I had always had coaches who were fans of me and then it is easy to perform.”

De Ligt was a key player for us, but the defender wanted more relevance.

He was still developing before he left the club and Allegri has his preference for every position on his team.

He wanted to be the main man or leave and it is great that we have made some good money from his transfer.

Cannavaro insists Juventus is a team in transition