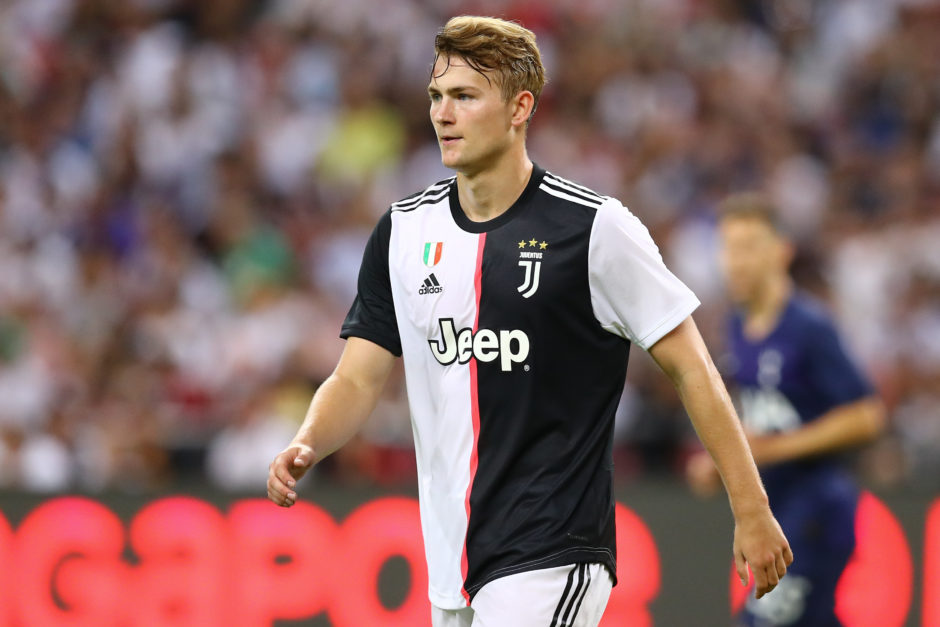 Juventus defender Matthijs De Ligt insists social media critcism doesn’t affect him and that he is learning a lot from his first few months at Juventus.

The young centre-back has yet to play a competitive game for the Bianconeri but is expected to feature heavily following Giorgio Chiellini’s knee injury.

De Ligt gave a lengthy interview to Dutch paper De Telegraaf in which he clarified his comments following the Parma game and offered an insight into his life in Turin so far.

“At Ajax I was interviewed about eight times a week, usually three times in the run-up to a match and five times after a match,” he tells De Telegraaf, “while Juventus handle the requests very selectively.

De Ligt was left on the bench for the season opener against Parma but insists that he wasn’t affected by the decision.

“The criticism that comes at you via social media if you do not play one match does not affect me, but I do read it. And to be honest, it surprises me. My reserve role just fits into the process of a young boy going to a top European club.

“Before I came here, I had an extensive conversation with the coach (Maurizio Sarri), In which he indicated that he not only wanted me, but that the first month of playing and training would be a big change for me.

“That is, according to him, for every defender who works with him. That is why I am not worried about my reserve role against Parma. I notice that things are getting better every day, that I am becoming fitter and stronger.

“But so many competitions are coming up. It is good that we have five very good defenders. That is also what you want as a team. I have to take steps in football, physical and at a mental level. For that I have to stay close to myself and I will wonder every day if I have done everything I can to improve.”

Talk turned to his Juventus medical and his first experiences with the club.

“The medical lasted an hour and a half and even my teeth were inspected. What I found most fascinating was that they could also see what my physical potential is.

“The conclusion surprised me positively, because there is still a lot of growth in it for me. That’s nice to hear, because then you know that hard work will be rewarded. They say what percentage you are sitting on and want to go to the hundred percent with you.

“If you see Cristiano Ronaldo and other stars with us, they are perfect teachers. They show me how much I can benefit by taking better care of my body.

“I would rather hear that I still have sixty percent to go than that I already have ninety percent of my ability. There is still an incredible amount of work in me. It is now a matter of time to unleash that potential.”

The Juventus training sessions are notoriously intense, often including a game between the players.

“The sparks fly off, although it is not the case that only ‘Gentile’ tackles are made…but everyone goes wild and wants to win every game!

“Training is different in Italy than in the Netherlands, mainly tactical. Both offensively and defensively, the automatisms are dragged into it, while the emphasis at Ajax was on the positional game.

“We did that twice a day. Now I realize that the positional game that we put in matches in the final phase of the season at Ajax was bizarre, really incredibly good. That was our strength. At Juventus, everyone is very focused on team discipline, on mutual arrangements. Everything is discussed in detail.

“That’s why I learn a lot from watching Giorgio Chiellini and Leonardo Bonucci, both together and along, they eat up their opponents. But the attackers also make me wiser. How do they move and act in which situation?

“Here you defend in one line and the coordination with the others must be perfect, so that you constantly have to look at your fellow players. That is very good for my development, to become more complete. Fair is fair: almost all top clubs, including Manchester City, have zonal defence.

“In principle, defending is not much different than in the Netherlands. We have a trainer with Maurizio Sarri who also plays the high line defensively and wants to build up from the back, so I am not allowed to retreat. He desires that and that is what I have always done at Ajax.

De Ligt is adapting to life in Italy, in part thank to the presence of his girlfriend AnneKee Molenaar.

“I have Italian lessons for an hour and a half five times a week, but it can always be crazier. My girlfriend Annekee has three hours of lessons every working day.

“We just want to adapt to our new country as quickly as possible. It is ideal that I have someone with whom I feel very comfortable. I have my girlfriend, who is also my best friend, with me. And that provides peace and stability.

“Do you see the mountains there? (He points to the Alpine peaks) We recently made a road trip along three mountain villages. And we still have to go back, because I have been told that there are almost a hundred left. ”

“It is my day off, but I have indicated to the club that I would like to do strength training. Most boys really take a day off on such days and that is also recommended by the club, because – certainly in the Italian hectic lifestyle- it is good to sometimes switch off fromf ootball. The physical is important, but the mental as well.”

De Ligt was asked about teammate and superstar Cristiano Ronaldo.

“There is an image of him as a somewhat distant person, but that is because he does everything on the field to win. Outside, it is really a very nice guy.

“What I particularly like is how he meets his fans. Because he has a thousand times the madness I experience. When he took one step outside in Asia, people almost literally jumped on him.

“It went so far that people came in through the smallest hatches and the emergency exits of the hotel to catch a glimpse of him. I have never experienced anything like this. It is bizarre!

“The fact that he nevertheless takes all the time for people is also a lesson for me. Sometimes you think: not now. But it is a small effort, with which you can do fans such great pleasure. We owe a lot to them.”

With Italy being the centre of style, has his fashion sense changed?

“In the Netherlands I did not care what I was wearing. And to be honest, I don’t care what I put on. I do notice that it is appreciated if you do not walk in the street every day in jogging pants, but that you dress a bit normal.

“And as said: you have to adapt if you go to another country as a football player. In terms of language, in terms of food, but also in terms of culture. A lot of attention is paid to what someone looks like. You still won’t see me in crazy creations. When we go out for dinner, I will put on a jacket, shirt or polo shirt. ”