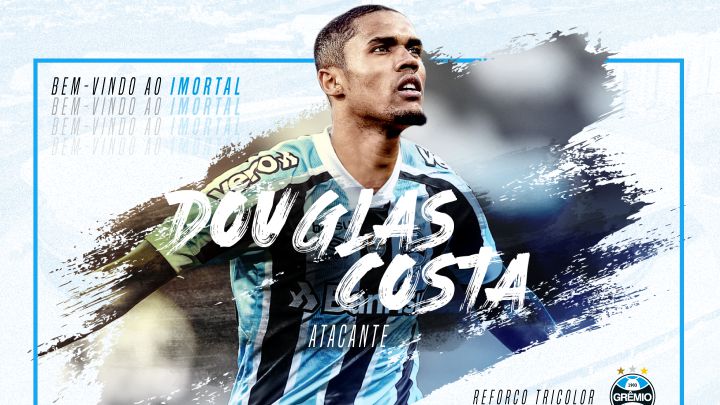 Douglas Costa talks of ‘special moment’ in return to Gremio

Douglas Costa agreed to return to Gremio this month on loan from Juventus, 11 years after leaving initially in 2010.

The winger spent the recently-completed campaign on loan with former side Bayern Munich, but found himself playing out a fringe role in which he started just three Bundesliga matches.

Costa has since returned to Juve only to leave on another 12-month loan deal.

Douglas insists that this will be an ‘important challenge’ however, whilst declaring his love for Gremio, a club close to his and his family’s heart.

“This is the most important challenge of my life, to go back to the club where it all started,” Costa said on his return to his boyhood club(via TuttoJuve).

“This is my favorite club, my whole family is a fan of this team. The greatest gift I could give to Gremio, since they have always wanted to recover and I could not wait to return.

“Happy to be here in this very special moment of my career. I want to win a lot here and I aim for the national team.”

Costa has always retained immense agility and speed, but a number of lengthy injury absences has hampered his football, and his long-term future appears outside of Juve.

Andrea Pirlo did use him sparingly as a substitute early into the previous campaign before allowing him to re-join Bayern, but with his loan and current Juve contract both coming to an end next summer, you wouldn’t expect him to play in the famous Black & White again.