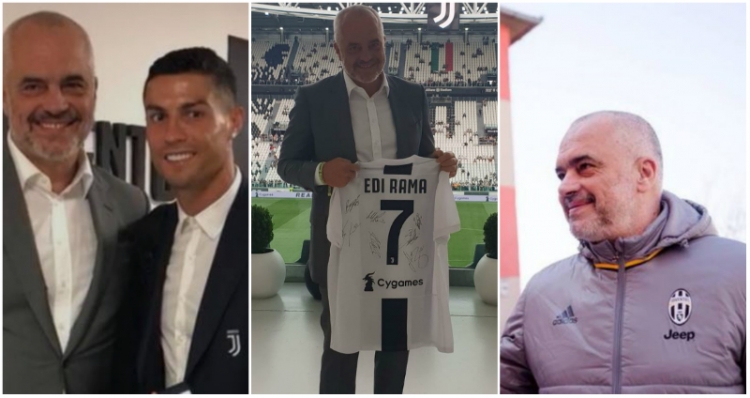 Albanian Prime Minister Edi Rama joked that he would like Giorgio Chiellini to be his Interior Minister and Leonardo Bonucci as the Defence Minister.

Speaking to Gazzetta Dello Sport, the Albanian PM talked about the contribution his country has made to fighting the Coronavirus in Italy by sending 30 health workers while also admitting his lifelong love for Juventus.

He began by explaining how the mission to send doctors and nurses to aid Italy came about.

“It comes from a strong memory: my generation lived by their skin during both the dark times of the dictatorship and the ferocity of the sea of ​​freedom, when we left the communist bunker to swim to our America: Italy!.”

“But perhaps it also stems from fear, from the awareness that the “bolt” of every European state can turn into collective suicide, while the invisible enemy attacks us with a pressure never seen before.

“Looking at Italy left alone became more embarrassing every day: every member of the European house cannot remain closed in his room. And so better to follow the advice of Mother Teresa: ‘Instead of cursing the dark we light our candle.”

“I got the first spark from Di Maio’s reaction when I hinted at the idea with shyness: 30 people are a candle that cannot heat a cathedral overflowing with suffering like today’s Italy or European cold. Luigi said to me: “But jokes, it would be unforgettable!”. I did not expect this emotion, which is pleasing and gives chills: it derives from Italian suffering and solitude. We do it perhaps precisely because we are poor. In the flood of comments I read in Italian I was struck by that of a boy from the South: “Albania reminded me of my dad. He said to me: ‘don’t forget the poor. In times of need, they will be the only ones to help you.”

Rama has often been pictured in his Juventus jacket while having travelled to the Juve stadium to meet management and players, so what does the club mean to him?

“The emanation of the spirit that gives everything to win, even against all odds. They photographed me with club jackets: they are beautiful, they are good in hard times like these. It’s worth the risk of losing some voters, especially Interisti!”

“Juventus memories? They are not happy are linked to two people, I shiver only to mention the surnames: Rep and Magath. And that’s enough because I don’t want to talk about a strange guy with the whistle who refereed against Madrid … There are so many happy ones that I leave alone: ​​better not to provoke the readers of the broad anti-Juventus front!”

“The Allianz? More than a beautiful stadium, it  is an impressive den that guards the Juventus spirit. It was an honor to meet President Agnelli, whose audacity I esteem as he “survived” in the shadow of the great lawyer.

“Children in Alabania who recently survived the earthquake met Cristiano and Buffon: I saw two colossal players with great heart. I think they always remember when they were nobodies.”

Has Sarri’s team convinced you on the field so far?

“Ah, I’m not saying anything because in Italy there are enough people who know everything without ever having touched a ball! In football, I watch fragments of life, I learn different ways to win. For me, great coaches are masters of leadership, like Mourinho.”

“The Juventus players have agreed to cut their salaries? It is the strength of that spirit of which I said before and which makes Juventus a religion, not simply a great football team.

“My favourite Juve player has been, and will always be Dino Zoff. In my Government, I would like Giorgio Chiellini the Interior Minister and Leonardo Bonucci as the Defence Minister.”