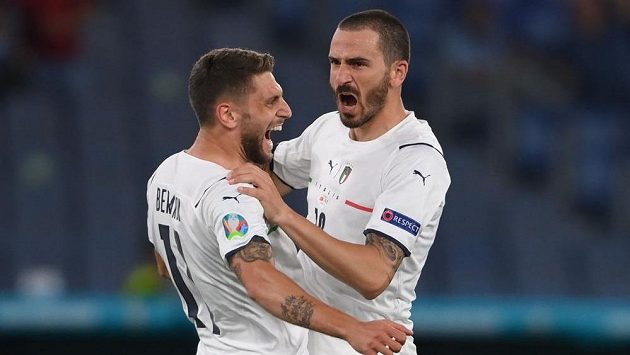 ‘Everyone in difficulty’ – Bonucci sends warning to Euro 2020 rivals

Juventus defender Leo Bonucci has sent a message to the rest of the countries at Euro 2020, insisting his team will cause ‘difficulty’ to everyone.

Italy opened their account with an eye-opening 3-0 victory over Turkey, but the manner in which they achieved that was outstanding.

The Azzurri came out the blocks with a mission, and didn’t let up at all, allowing Turkey little to no space on the ball, and Gigio Donnarumma didn’t have a single save to make.

Italy enjoyed 24 shots on goal however, eight times that of their rivals, and while their performance will already have made a statement in itself, Bonucci has talked up his side’s desire to succeed.

“When you start these adventures, there must be a bit of emotion that generates the desire to play.” Juve’s Leo told Sky after the final whistle(via TuttoSport).

When asked how his side were feeling after that performance, he insisted that his side were not getting carried away, saying: “It’s just the first, down to earth”

“I imagined the match like this, it’s the path we took, he made me imagine it like this and we made it. down to earth.”. Finally on the upcoming clashes: ” The matches are close together, the teams will know us more and more but they know that by playing like this we will be able to put everyone in difficulty.”.

I think Italy will no longer be considered dark horses for the tournament after that showing, and now have to be seriously considered amongst the favourites to be crowned Champions of Europe, and after the display of Domenico Berardi, I can’t even complain that Federico Chiesa was left on the bench.

I’m sure the former Fiorentina man will have some impact for Italy even from the bench, but what a performance from Domenico and the entire team.

I feel like there is plenty more to come from this team.

Video Classic: Throwback to this amazing Nike advert including Ronaldo

Image: All of Juve’s players to watch at Euro 2020