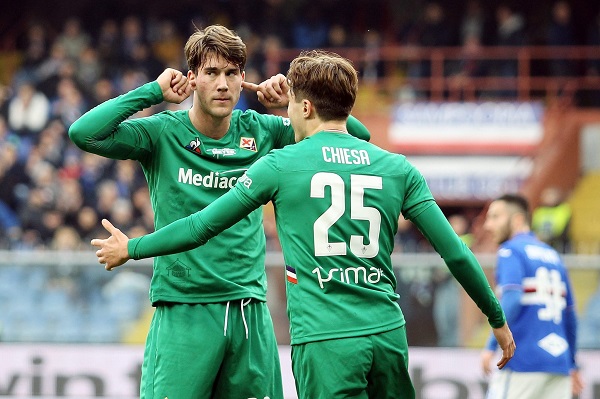 Former Fiorentina director, Pantaleo Corvino, has spoken about the combination of Dusan Vlahovic and Federico Chiesa as both players prepare to form an attacking duo at Juventus next season.

Chiesa has been at the club for the last two seasons while Vlahovic moved to the Allianz Stadium in the last transfer window.

Since the Serbian moved to the club, Chiesa has been injured, so they haven’t played together.

But they were teammates at Fiorentina and often played on the same team.

They will now reignite that partnership in Turin and hopefully lead Juve to a few trophies.

It remains unclear how Max Allegri will use them in his team, but Corvino is convinced that they can thrive as partners.

He said, as quoted by Tutto Sport: “They are a great couple because Vlahovic and Chiesa have different characteristics and complement each other. I imagine Federico on the wing or behind Dusan: it won’t be easy for anyone to stop them. Moreover, on a human level, the feeling between them is very strong.”

Chiesa and Vlahovic are two of the finest attackers in Italy now, and Juve is well-equipped with both of them in their attack.

Chiesa was the clubs leading offensive player before he was sidelined, and Vlahovic showed in the few months he played for them that he is a quality player.

Spanish club leading Juventus in the race for Serie A defender