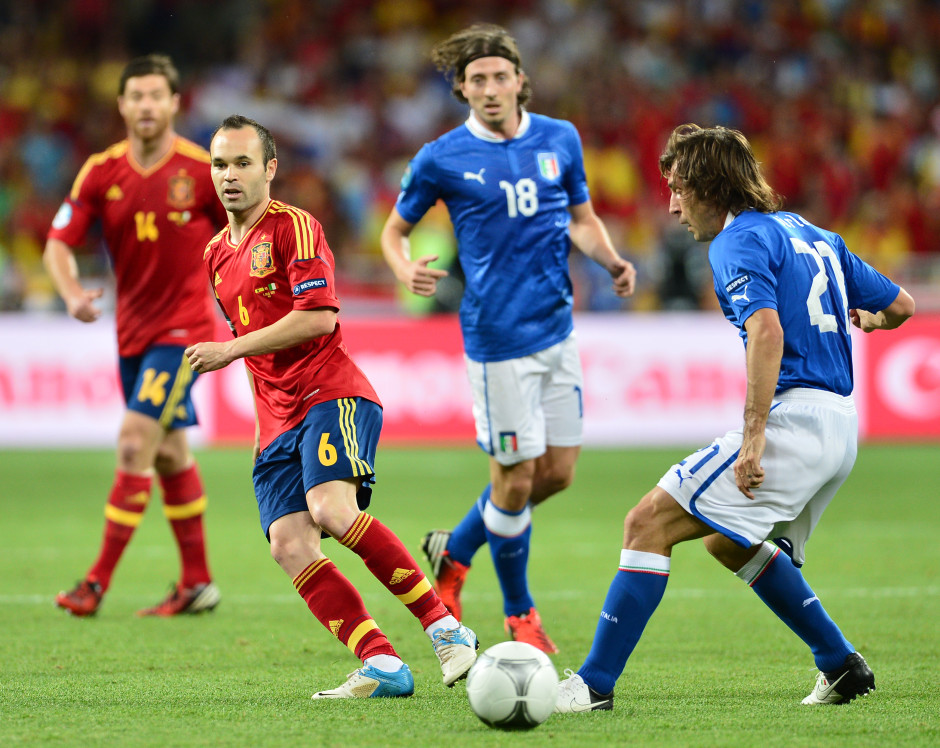 From Pirlo to Iniesta: Comparing the Midfields of Juventus and Barcelona

The time is upon us. It’s Champions League final week. For Barcelona, this is business as usual, but Juventus are looking to definitively reclaim her spot as a force to be reckoned with in Europe. Certainly, just making the final is an achievement in itself, but as Juventini we know a little secret about achievements: winning isn’t important, it’s the only thing that counts. So, while making the final is really swell, we’re here to win, not just show up.

One of the key determinants of this fixture will be the two sides’ respective midfields. On the one hand, you have Juventus, boasting a collection of midfield riches including Andrea Pirlo, Paul Pogba, Arturo Vidal, Claudio Marchisio, Roberto Pereyra – not to mention the secret weapon, Simone “Scudetto” Padoin. Across from those studs, you have a nearly equally dangerous Barcelona midfield consisting of Andres Iniesta, Ivan Rakitic, Sergio Busquets, and the soon to be ex-Barca star Xavi.

Now, each side will have an odd man out. Juve play with four midfielders, and Barca play with three. For Barcelona, Xavi could be the one riding the pine in this match, as he has been used semi-sparingly in Champions League. He only played 23 minutes in the two games against Bayern Munich, for example. Instead, look to see Iniesta, Busquets, and Rakitic starting. Rakitic is something of a replacement for Xavi, as much as one man can replace a player like Xavi, whereas Busquets provides the steel in midfield.

Barca’s midfield – and entire team, really – deserves credit for excelling at two different tactical styles. The first it the same old tiki-taka that Barcelona has ridden to success for years, while the second is a more direct style of play that sees the dangerous attacking trident of Luis Suarez, Lionel Messi, and Neymar receive the ball and move on to wreak havoc against opposing defenses.

Now, Juventus have the numbers advantage, sort of, in midfield. It’s four on three, but Messi likes to drop deep at will and take the ball, to deflect defenders’ attention away from his teammates and/or to destroy entire teams with a run from deep because he is Messi and he can. This is actually where, in my opinion, Juve’s only significant possible midfield weakness could show. If Messi comes deep from his forward role, we could very well see Andrea Pirlo marking him, even if for just a second. I find it hard to believe that Allegri won’t assign the difficult task of marking Messi to someone more adept at shutting down a player, and most likely several different guys in both the midfield and defense of Juve will have turns taking on Messi, but Pirlo on Messi is a disaster waiting to happen.

However, the opposite sort of holds true as well. Carlos Tevez and Alvaro Morata are constantly coming deep, though often this is for defensive purposes or to put pressure on the opponents when they have the ball. Meanwhile they do this in attack as well, but while both men are great players, they are not known for their ability to get past entire defense, as Messi is. Still, Vidal gets a bit of freedom when it comes to closing down the opposition, and he could cover for Pirlo on many occasions depending where on the pitch the play is happening.

Furthermore, Barcelona’s midfield, with all due respect to Sergio Busquets, isn’t exactly the toughest in terms of shutting down opponents. Certainly, they are excellent at keeping possession, so they don’t necessarily need to worry about that. And even when they play in their more direct method, as they did versus Bayern Munich, they still don’t get crushed by opposing midfields. Regardless, Juve’s midfield is known for its overall tenacity and for how well-rounded most of the midfielders are. So, while Messi dropping deep could add a wrinkle into the match up, Pogba wreaking havoc on Barca’s midfielders is also a highly likely scenario.

Of course, this all depends on who starts. I personally would be surprised to see Andrea Pirlo start the match on the bench, though I prefer Marchisio as a regista in Champions League, Pirlo has played there rather consistently. He played a full 90 minutes versus Real Madrid in the first leg, and started there in the second leg. Marchisio is still preferred over Pereyra, and Vidal tends to start in the most advanced midfield role. One caveat to all of this is that I always cry wolf when it comes to Pirlo’s ability to defend, and so far this year it hasn’t come to haunt Juventus in Champions League.

Both teams boast excellent collections of midfielders, and yet both sides also have potential weaknesses in this match up. Each side also has their own key determinant for midfield success. For Barcelona, it’s Messi’s ability to pitch in during build up play with the midfield, this is likely the best chance Barcelona has to break through Juve in a way that would leave the defense exposed – though I am almost completely ignoring one of Barca’s biggest strengths, counter attacking, as this sort of bypasses the midfield entirely – in spite of the numbers and defensive advantage that Juve has.

For Juventus, their midfield will need to be totally in sync and perfect on the margins. Usually, when Juve struggles in creating dangerous chances, it’s due to missing the final touch on their build ups. They’ll get the ball to the final third, but the final pass isn’t there. Sometimes Tevez or Morata can use their own skill to create the chance, and other times they catch teams on the break or not properly organized in defense. Additionally, Pirlo needs to have a perfect game, as his – admittedly small – flaws could still be fatal for Juventus.

On Saturday we will know without a doubt which side has the better midfield, at least until the transfer window opens up, and then next year we can have the same debate with slightly different rosters or tactics. It’s a beautiful game, isn’t it?