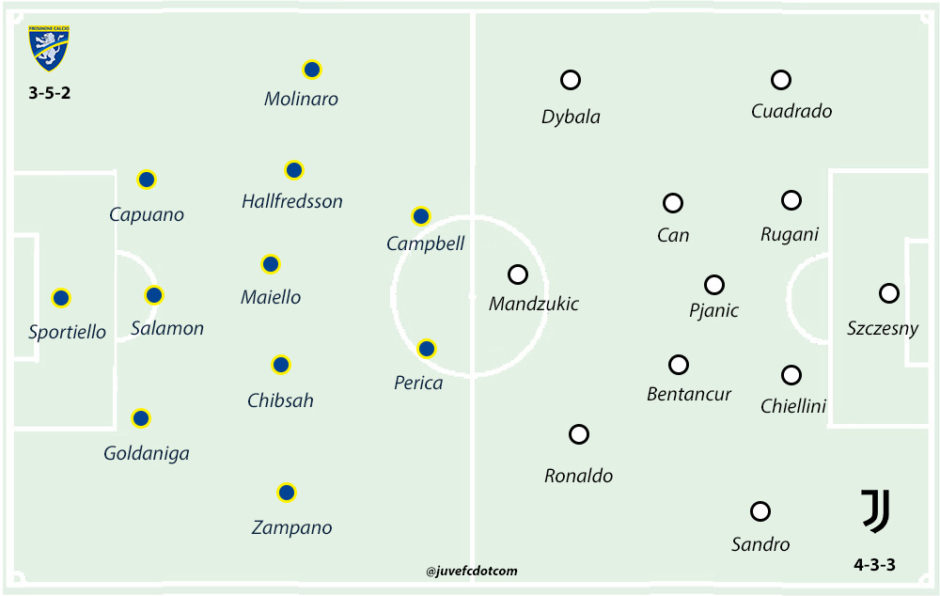 Cristiano Ronaldo broke the deadlock late on before setting up Federico Bernardeschi to secure a valuable away victory against Frosinone.

Wojciech Szczęsny: Didn’t have a single save to make and was a spectator for much of the night, given the lack of Frosinone pressure, especially in the second half.  6.0/10

Daniele Rugani: Made his presence felt in the air, his passing could’t be faulted and on the few occasions that Perica got forward, he had the measure of him. 6.5/10

Giorgio Chiellini: Completed all of his tackles, won every aerial duel and was foot perfect throughout, marking Campbell very well and being alert to the few attacks that Frosinone mustered. His crosses into the box came as a surprise and were one of the few attacking high points of the performance. 7.0/10

Juan Cuadrado: His passing was way off, the deliveries into the box from the wide areas rarely found their mark and his defensive work was a real liability. I think it’s time for us to move on from the right-back experiment and only use him there when absolutely necessary. 5.0/10

Alex Sandro: Hard to fault his defensive work with 4/4 tackles completed and his passing was pretty sharp – His attacking performance left something to be desired and he really needs to have more of an impact in tight games like this. 6.0/10

Emre Can: Good range of passing but it would have been nice to see him attack more – Overall, he looks a dynamic type who can defend well when needed. 6.5/10

Miralem Pjanic: Started off playing more of a mezzalla position before moving back into the centre and dropping deeper. Continued to look lively throughout and played a part in both goals, his shot being the rebound Ronaldo capitalised on before providing the assist for Bernardeschi’s late goal. 7.0/10

Rodrigo Bentancur: Really looked off the pace at times and made some mistakes and a poorly timed tackle that earned him a booking. Needs to be more decisive in the final third where his contribution was lacking. 5.5/10

Paulo Dybala: A massively disappointing evening from the youngster who seems to be looking for his place in the team. He lacks the physicality to play as an attacking midfielder and is often isolated when playing too far out on the right. Had little to no contribution to the game beyond creating space for his teammates. Really needs to leave his mark on games. 5.5/10

Cristiano Ronaldo: Exceptional. Constantly moving and looking for space to exploit and while he could have scored at least three goals, he secured the victory with a late goal from Pjanic’s rebound.  7.5/10

Mario Mandzukic: Looked a little leggy and weary and failed to make a telling impact on the match, however he wasn’t given much service in the first place. 6.0/10

Federico Bernardeschi: Made a huge contribution to the match when he entered and played a part in getting Juventus moving forward. Pushed into the wide spaces to open up the Frosinone defence and scored a fine goal to seal the three points. A man of the match type of performance and he warrants a starting place in the next match. 7.5/10

Joao Cancelo: His introduction for Cuadrado helped change the game by giving Juve more of an attacking threat down the right. 6.5/10

Juventus winger criticized for for his performance in international friendly