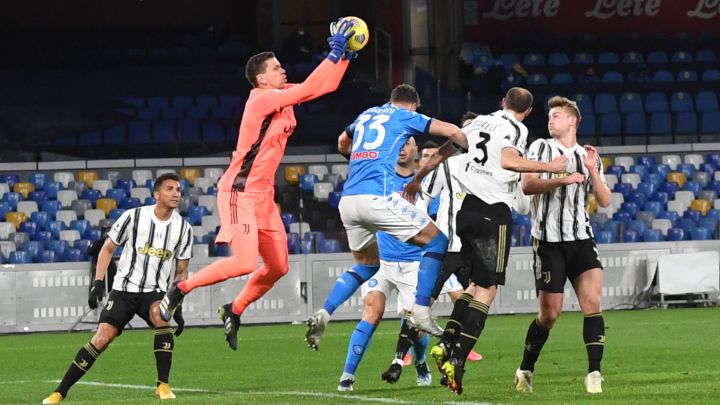 Gannaro Gattuso’s Napoli job was reportedly on the line today, and his players showed the fight to keep him in the job with a win over Juventus.

Pirlo made the decision to start Bernadeschi on the left this evening, in what would likely have been Aaron Ramsey’s role as the more attacking option to Weston McKennie, and we started the match brightly.

The Old Lady started the match comfortable in possession, and was willing to take our time to build into the match, but not in the way that you would consider slow.

The game took a turn on the half-hour mark however. The referee is set to have a second look at a collision inside the Juve box, and as soon as you see the replay you instantly knew that Giorgio Chiellini was set to be punished for his challenge.

The Italian defender jumped up inside the box with his arms in a loose, high and unnatural position and strikes the Napoli forward in the face, but what was most annoying is that they never looked like causing any damage with the cross.

Lorenzo Insigne steps up, and unlike the Supercoppa Italiana, manages to find the top corner and put his side 1-0 up.

We were shaken after the goal, but you could feel that the team that comes out in the second-half will be much more direct.

Juan Cuadrado was replaced by Alex Sandro at the break, but the initial 15 minutes after the restart was exactly as expected.

The Old Lady were fired up, and that man Chiesa was causing all kinds of havoc for Napoli’s left hand side. He is running at, and past whoever is in front of him, although his crossing was a little too fired up also.

His work had carved out an opportunity for Cristiano Ronaldo, only for him to fail to get a great contact on two occasions in quick succession.

Alvaro Morata does get the ball into the net with just under 30 minutes left on the clock, but it was rightly ruled off for offside, and Weston McKennie entered the field in place of a tired Bernadeschi who had done plenty of running today.

Juve continued to pile forward, but Naples did well to limit the space of both Morata and Cristiano Ronaldo, but once Bentancur had to go off with a knock, Kulusevski joined them in numbers.

This fed for a crazy final 15 minutes of action, and there was plenty of moments where we looked to score.

Federico Chiesa (who has likely been our best player today), put his long-range effort just past the post, shortly before Kulusevski’s fine work fed the ball into Alvaro Morata inside the box, only for him to be surrounded as he turned to shoot.

Juve eventually were forced to settle for defeat, but not for a lack of effort and hard work. The only man I could blame is captain Chiellini for giving away the silly penalty, but the team made us proud with their efforts in the late part of the match.

Credit to Napoli for showing their fight and potential in defence as they fought to save the job of Gennaro Gattuso, who will be the true winner with many reports claiming that his job was on the line today.

Did the Napoli players fight for their manager today?