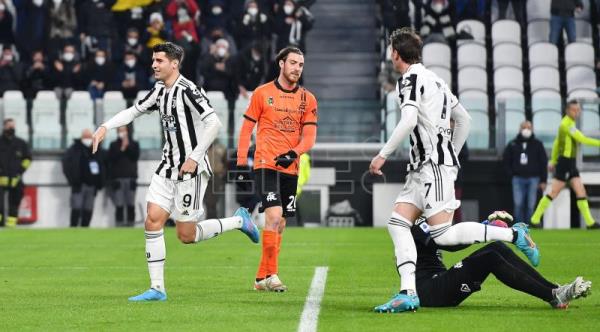 Atletico Madrid insider Jorge Garcia has claimed that Alvaro Morata is most likely to end up signing for Juventus this summer.

The striker was linked with the exit door in January, with his agent believed to be hoping to find a way for his client to move to Barcelona, but Atletico had no interest in strengthening their rivals.

Garcia now claims that Morata has no interest in returning to his parent club when his current loan spell ends, nor does Simeone have any interest in seeing him come back to play for his side either.

“Yes, it is a very concrete possibility,” Garcia told TuttoJuve on the Spain international’s potential Juventus move this summer. “Morata does not want to return and Simeone does not want him anymore, the parties will clearly have to agree to understand what will be the best possibility for everyone. But we are only in March, other paths cannot be excluded. . Sensations? To date, the most real one is the solution of staying in Juventus next season “.

While I had ruled out Morata’s future in Turin following the arrival of Vlahovic, their cohesion in attack as a pair has been surprising, and given time I expect their relationship to continue to thrive. It is this reason why I believe we will be making his move permanent this summer in a cut-price deal, with very few rivals for his signature.

Image: Juventus star pictured on crutches as Allegri rules out return this term

Dybala might be closer to leaving Juventus than we all think