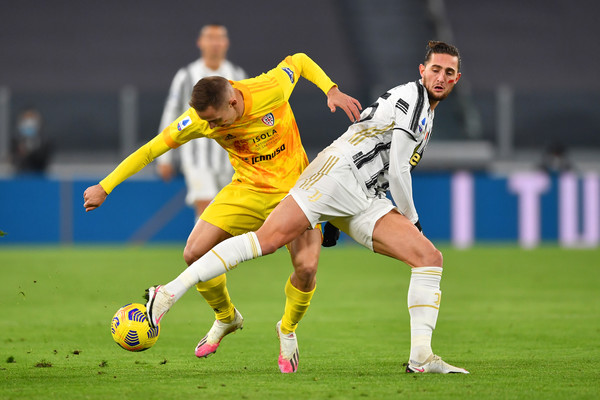 Adrien Rabiot arrived to Juventus in the summer of 2019 as a free agent after seeing out his contract with Paris Saint Germain.

The Frenchman undoubtedly possesses a big potential, but he is yet to portray himself as a dependable element within Andrea Pirlo’s side.

Whilst the 25-year-old still has time on his side, the Bianconeri supporters are demanding more of their midfielder.

Despite the fact that his performances have been blowing hot and cold, Rabiot still has admirers on the European stage.

According to Italian agent Vincenzo Morabito (via Calciomercato), the big midfielder is personally wanted by Pep Guardiola.

” Rabiot is on Pep Guardiola’s Manchester City goal list, but he will not leave Juventus. Paratici has already said ‘no, thanks’ to his friend Begiristain.”

The agent also shared some information regarding the futures of Paratici and Pirlo at the club.

” Paratici will renew his contract with Juventus. Fabio is one of the best European directors, it is no coincidence that he is highly esteemed by Manchester United and has a privileged relationship with Florentino Perez, who has tried several times to bring him to Real Madrid.

” Paratici was also close to Lazio 10 years ago, before joining Marotta at Juventus, Fabio was in contact with the Biancocelesti. At the time he could have become Lazio’s director with Mihajlovic on the bench.”

Morabito also expects Pirlo to remain at the helm of Juventus for at least two or three seasons, unless the results take a turn to the worse.

However, the agent claims that Simone Inzaghi could possibly become the next Bianconeri manager, but first he has to break away from his beloved Lazio.