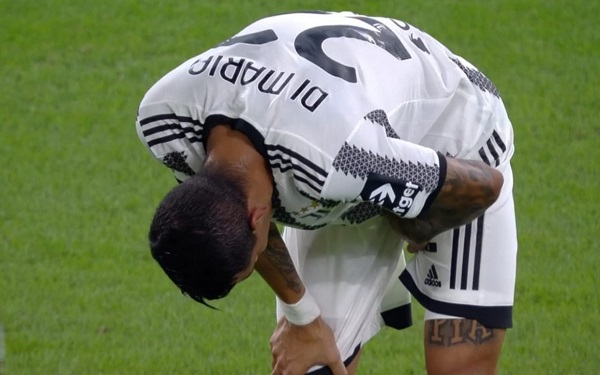 Max Allegri admitted in his post-match press conference after Juventus’ match against Sassuolo that Angel di Maria suffered a repeat of an injury he had weeks ago.

Now the attacker could be sidelined for up to half a month after suffering an abductor issue.

He had a debut to remember after scoring a goal and providing an assist in the 3-0 win.

Juve might have struggled if he wasn’t in that game, and it was worth risking him even if he wasn’t fully-fit.

But he seems to have aggravated the problem, and the Bianconeri would be without him for their next few games.

The Italian journalist, Marcello Chirico, has now accused Allegri of a history of aggravating the injuries of his players.

He says that started when he was the manager of AC Milan. He writes in his column on Calciomercato:

“Deciding to field convalescent players, or in any case not in perfect condition, is however an ancient vice of Allegri , and of his complacent technical staff. He did it too when he was coaching Milan, precisely in the 2011/12 season, the one in which he fought for the Scudetto with Conte until the last day.

“In March of that season Thiago Silva, after having accused a muscle discomfort during the week, he was however sent to the field against Roma, worsening the situation and then not being able to use him for a few months, right at the decisive moment of the season.”

Di Maria’s injury is a major blow for us, but it is outrageous to think Allegri deliberately caused the problem to worsen.

The gaffer needs all his players to be fit, and he would only field them when it makes sense.

Hopefully, Di Maria would be back on the field sooner than later.