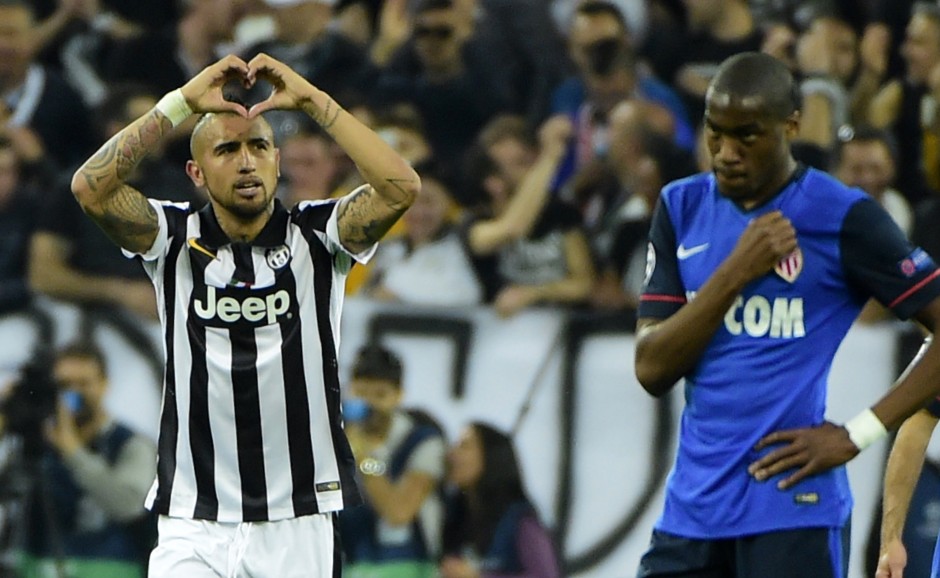 For a long time it looked like either side could win this match. Juventus, for the entirety of the match, was more frequently in possession. However, Monaco were regularly threatening with their counter-attacks, and in the first half they nearly scored on Juventus on a few occasions. Juventus failed to capitalize on their chances for the first half, but eventually Arturo Vidal’s penalty kick saw them score.

In fact, Juventus first poked Monaco’s goal in the 5th minute. Andrea Pirlo found Alvaro Morata with a through ball, and Morata broke Monaco’s offside trap. A minute later, and Carlos Tevez forced a saved with an effort from some range.

Two minutes later, and Monaco fullback Layvin Kurzawa tried his own long range effort, though this sailed over Juve’s crossbar. Shortly after, Monaco’s biggest scoring chance came. Anthony Martial sped past Leonardo Bonucci and Stephan Lichtsteiner as he ran through Juve’s half, and when he reached the right side of Juve’s 18 yard box he found Yannick Carrasco at the center of the box unmarked. Carrasco got the ball and took a shot on goal, but Gianluigi Buffon saved the point blank effort. It was to be the first of several amazing saves Buffon would make today.

Monaco were able to stay dangerous on the counter with only three men pushing forward because these three men were rather quick – Carrasco and Martial were faster than Juve’s defenders, but then Juve’s defenders were disciplined enough to not get caught out before any counter attacks started, so usually the defense was able to buy some time before to help stave off the pressure from the counter attacks.

Juve did create chances in the first half semi-regularly, but they were not finishing them. Carlos Tevez had a very close far range volley in the 26th minute, but he didn’t hit it strongly enough, so his effort was easily saved. In the last play of the half, Arturo Vidal skied an effort right in front of goal, after Tevez found him open with a beautifully played long ball.

Right after that miss, the first half ended. Juventus came out even stronger in the second half, though, while Monaco lost a step in their counter attacks. The result was a half that saw Juve in control, with Monaco only occasionally causing issues.

Vidal again tried to score shortly into the second half, taking a shot from long range, but like all the efforts in the first half it wasn’t for a goal. Another exchange of pay found Morata possibly as the last man, but he was dispossessed by the last defender. This led to a corner kick, which led to a long spell of pressure on Monaco in their own half from Juventus.

Finally, Pirlo sent another long ball to Morata in the box, similar to the one at the start of the match. Morata again broke the offside trap, only this time Ricardo Carvalho fouled him, and Juve were awarded a penalty kick. Vidal took the kick, and he sent the ball into the top left corner of the net, perfectly hitting it and scoring Juve’s only goal of the match.

Juve settled for a 1-0 win after Vidal’s goal. They played carefully, making sure to nullify Monaco’s counter-attack threats. A Dimitar Berbatov header from a set-piece was the only chance that this plan would have failed, but the header went out for a goal kick.

Juve are in a nice position for the second leg, as they did not give up an away goal. We will see what Monaco will try, as the impetus is on them to score. However, they will also have to be careful not to give up an away goal to Juventus. Either way, we are in for another tight match.

Man of the Match: Vote below… 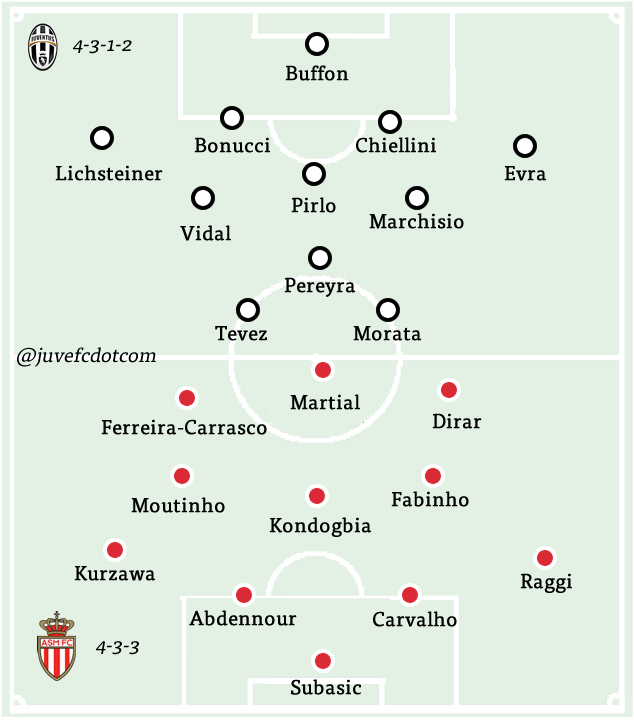