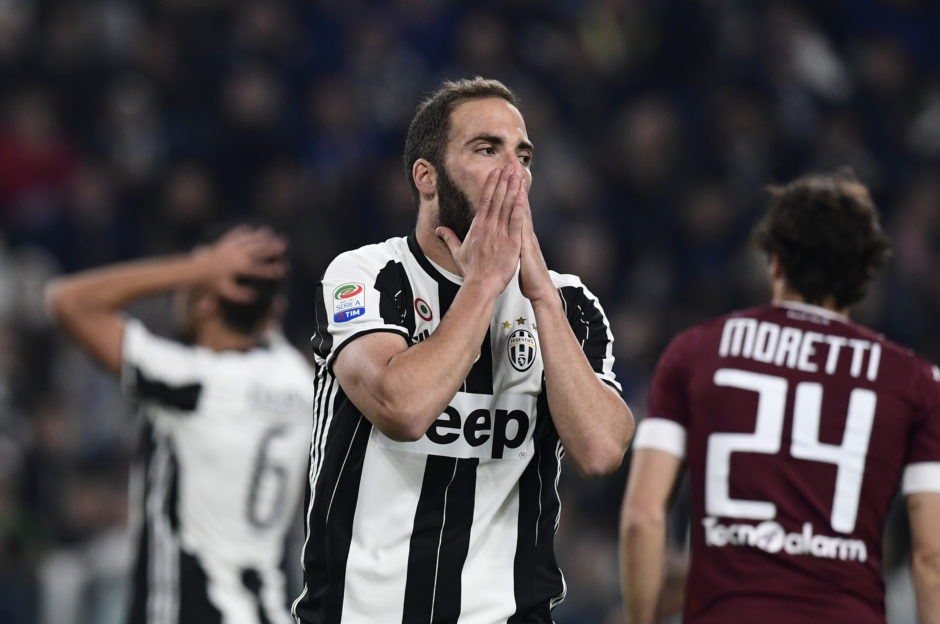 Neto – Could do little about the perfectly struck free kick. Had a couple of saves to make which were comfortably taken or repelled. Not as vocal as Buffon and I cannot help but feel he lacks presence and communication with the defence at the back. More likely the case is that I am so accustomed to Santo Buffon that any other seems a mere shadow, an unwanted imposter. 6.5

Bonucci – Made some smart challenges and kept Belotti on his toes and away from goal. Also should have scored when gifted an opening in the box. Glad to see him through the game unscathed. 6.5

Benatia – Again I find myself leaning towards avoiding the purchase option. For the Moroccan just never seems fully sharp. Obviously without regular games this will happen, and he is solid in the air and hard to pass, yet it bothers me to ponder he will remain ahead of Rugani in the pecking order. He is not worthy of that. 6.5

Asamoah – A little hard done by on several decisions, especially the one which led to the goal for the visitors. His game in the final third was made far harder than usual given the lack of mobility and pace of Mandzukic. 6

Lichsteiner – Huffed and puffed, forced a solid save from Hart yet looked out of sync with his team-mates. 6

Khedira – Missed a gilt edged opportunity to score from 6 yards out, yet kept the ball moving well and did his best to make up the numbers up top. Neither brilliant or particularly poor. 6

Rincon – Still working his way into the fold, yet produced several superb challenges and showed a threat sporadically in the box with eagerness to get on the end of moves. 6.5

Cuadrado – Appalling. His worst performance since 2016. Perhaps he was unhappy to have been dropped for the Monaco tie? Such is his sensitive little soul. Regardless of the reasons, Juan was awful in and out of possession. 4

Sturaro – I am always happy to see him play yet the LM position simply does not suit his natural skill-set in any way which is useful for the team or his own development. He drifts inside too much, leaving gaping holes on the left for opponents to attack and is not adept at hold up play, in the air or dribbling. He is a central midfielder. Why not give him a chance at the base of midfield where he can use his zeal to hustle and bomb forward? 5

Dybala – Created a beautiful opening for Sami, failed to finish when played in one on one with Hart and very much missed his fellow Argentine. 6.5

Mandzukic – If ever there was a reminder why we require a CF of stronger calibre to back-up and challenge Higuain it was this game. Mario toiled hard as always, yet wasted several chances to open the account for the home side. He lacks pace, his finishing is haphazard and he was too easily marshalled by a team whose defensive record is one of the worst in the league. 5

Higuain – Brought on to rescue the game, and after missing a couple of chances he thankfully came good in the final moments, despatching a smart drive from just outside the box to level the game with seconds to spare. 7

Pjanic – Facing a Torino side adopting a siege mentality, Miralem had little to aim for with his passes, yet did manage to up the tempo of our haphazard attacking verve. 6.5

With eight changes to the starting XI which excelled in the french principality just a few days back, it came as no surprise to find our play disjointed and reliant upon moments of individual quality.

We were unimpressive, laboured on the ball and our finishing, converting just 1 chance of the 10 created was a return to our form pre-February. A defeat would have been harsh and a terrible way to destroy our indomitable home record of an unbeaten run which stretches back to 2015.

Allegri is a manager to likes to take risks. More often than not they come off, but last night he was almost caught out. My own stance is to play your best team always, other than perhaps before a champions league final. We are 2 up against Monaco and although I understand the need to rest key players and keep the squad as a whole sharp, eight changes proved too much for the free flowing, entertaining football we have become accustomed to over these last few months to continue. This was the derby, with our cross town rivals always likely to fight like berserkers. To hold on for so long with ten men was a laudable feat, though they were helped by our profligacy.

Mandzukic, Cuadrado and Sturaro were wretched and a performance like this erodes our confidence when we should be gaining momentum, powering our way to the title with games to spare rather than sauntering, assuming we need simply turn up to claim victory.

We lacked leadership on the field. Alongside cohesion.

I can understand a brief lull after such excitement in France and many of the players will have their heads focused on the match next Tuesday and hopefully the final in Cardiff. It is up to Allegri to ensure that they remain focused. We cannot afford to slip up in the league and must get the job done next weekend in the capital.

There are quality gaps in the squad. Which can only be addressed in the Summer. Until which, we can but hope and pray that Higuain above all others remains fit. For he is a vital component of any success we can achieve.

Torino manager Sinisa Mihajlovic was a talented yet despicable player…

Mihajlovic has not changed from his playing days. He was an overly aggressive prick then and displays the same absence of dignity and class now in a suit. A natural brute of a man who should be punished for attempting to man handle the officials and brought into line by Cairo for his post match comments aimed at Vialli. It does nothing but turn away potential fans to witness such uncouth behaviour.

A quick note on the red card…which for me was the right decision. If you touch the ball first and brutally follow through with your studs on a player’s ankle, it is a foul which warrants a yellow card. The instructive word here is control. Which was lacking when Acquah scythed through Mandzukic. Boye in turn was a disgrace; spiteful and petulant throughout. As is often the case, the players reflect the personality of the coach.

Onwards to Tuesday and hopefully upwards…

Juventus Youth and Loans Update – May 2017