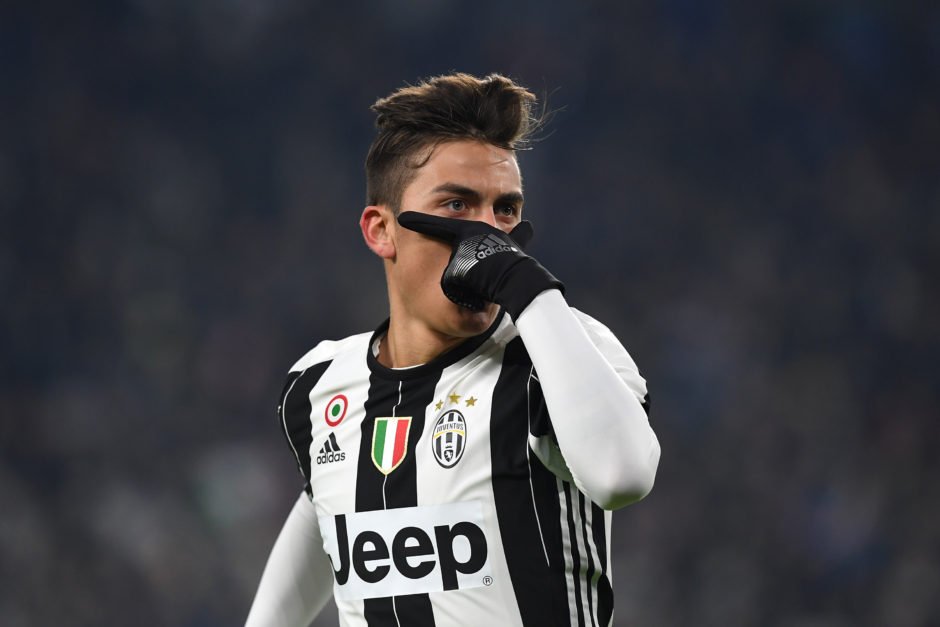 Neto – Could do nothing about the superb strike from Bacca which came out of nowhere. He got down well to save from Fucka late on and finally made a comfortable block on Deulofeu. Considering he barely features in the starting XI this was a impressive effort from the Brazilian. 7

Bonucci – Finding his finest form after his injury lay-off. Has looked sharper and more confident on the ball. Also made some superb interceptions. 6.5

Rugani – I am glad that Allegri has finally found whatever he needed in order to continue Daniele’s development in the first XI. These kind of games will teach him so much. His performance was calm, measured and capable, especially so in the air. Made no errors and distributed the ball intelligently. 7

Barzagli – He is not a RB nor a RWB and asking him to play so wide, I believe is a recipe for disaster. At 35, and never a player of searing pace, he is prone to attacks by fleet footed opponents, yet to be fair, he was fine in the first half, and quite solid in the second. Admittedly, Allegri had tasked Cuadrado with keeping pressure on AC’s left flank, which offered some protection to the veteran. Still working his way back to his best, in body and mind. 6.5

Asamoah – Going from strength to strength and on this form, Sandro will be hard pressed to walk straight back into the side. He dominated the wing from top to bottom in the first half, was instrumental in both goals and yet slowed down dramatically after the interval, as was to be expected. If we can improve his stamina, his return to the ranks as a LB/LWB could prove as valuable as a major signing in that position. His tackling, pace and final product were top notch for 45 minutes. He was the best player on the pitch until he tired. 8.5

Khedira – It is high time that Khedira was given a roll of the dice as the fulcrum of the side. Had Allegri attempted this early doors this season, I truly believe we could have avoided so much bother in terms of the consistently haphazard form we have endured. He was and remains the most obvious replacement for Marchisio in front of the back four. Why it has taken Max this amount of time to realise this can only be explained by the value he places on Big Sami playing higher up the field. He was powerful throughout. Physical, reads the game amazingly well, wins the ball on the ground and in the air, not just starts attacks with key passes but then joins the attack. Was unlucky with a chance in the box which hit a team-mate, and Lady Luck was again turning the other way when his tackle lead to the Bacca wonder strike. 7 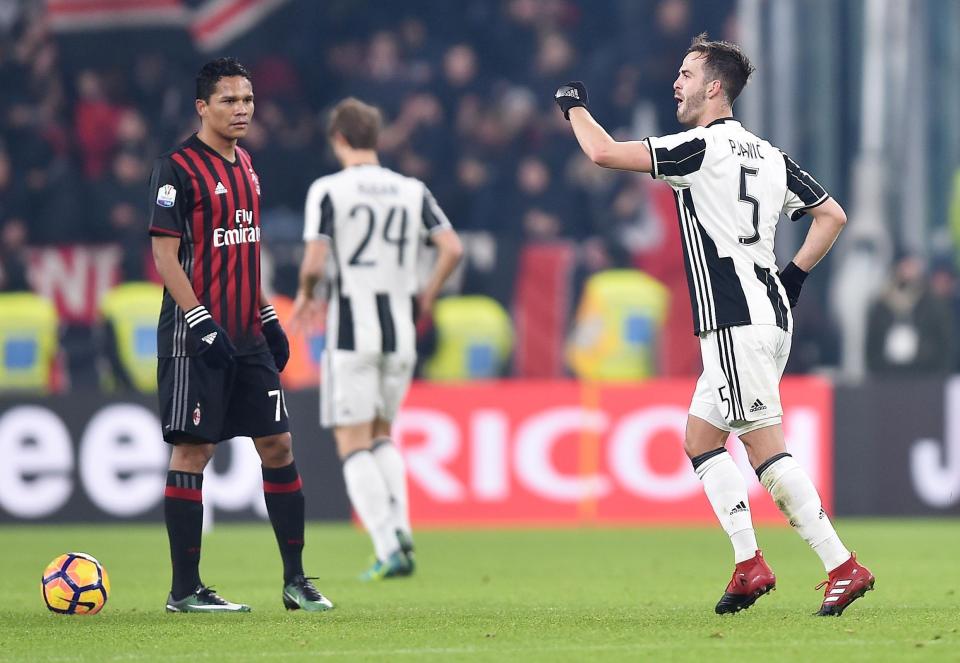 Pjanic – With a big lad beside him and a plethora of options to pass to up top we are beginning to see the best of Miralem. His work on the ball was classy, his free kick sublime and Donnarumma did well to stop the midfielder’s dipping volley from reaching the net. The Bosnian is finally blossoming in black and white. 8

Cuadrado – Hit and miss, but perhaps one of his better games. Managed to assist defensively, making a wonderful sliding challenge late on in his own box to deny the opposition. Helped create the opening goal and never stopped running. The other side of his game was also on offer; wretched passing, losing possession too easily and poor decision making. 6

Dybala – Took his goal splendidly and worked hard between the lines. Found chances hard to come by yet it was his departure which seemed the final nail in our offensive endeavour. 7

Mandzukic – Guilty of the worst miss of the season when it looked far easier to score, the goal gaping, and also sent wide another great opportunity. Full of running as always and effective in the air. 6

Higuain – Worked damn hard, could not capitalise on the small handful of openings conjured but gave his everything for the cause. Wonderful to see him charging back to not just relieve the pressure on the defence, but win the ball and bomb back up the field with guile and class. 7

Sandro – Looked rusty; poor touch, sloth pace. Offered nothing of value except winning a free kick in a dangerous position.5

The first 45 minutes of both our recent games has produced the best football of the season. With the midfield highlighted as an issue for many moons, Allegri has cunningly forged a new system which brings us so much closer to the sum of our parts. Khedira is superb at the base alongside the ever improving Pjanic. And with always several players to find higher up the field, we have become too much for opponents to handle.

A brief mention of the lack of discipline and decency of our opponents. Their whining, contesting every decision and a fair few nasty fouls, was not becoming of a side of such storied prestige. Fucka should have been sent off and at times the ref was losing control. It was pleasing to see at least Big Sami and Mario give some back. For we lack that spitefulness, which can help a team pull together and fight as a unit, one for all and all for one. We are often too nice a team to play against. Whilst the line can be thin between aggression and outright viciousness, the difference between AC and Juve when conceding, is that we have a tendency to retreat and hope to hold out, whereas AC bare their fangs and go for the jugular.

A magnificent outing from Asamoah.

Asamoah is revived and rejuvenated. His performance was staggering and his domination of the left flank in the first half won us the tie. However the largest single change to our potency is the bodies we are getting into the box. Teams cannot deal with Higuain, Dybala, Mandzukic, Cuadrado and support from Pjanic, Khedira and the flanks all flying into their rear-guard at pace. This is why we have demolished -albeit before half time – our foes so swiftly of late. We are also showing more hunger, greater eagerness to be first to the ball and hunting in packs. It is when we switch, for no good reason whatsoever, to sitting deep, that the offensive elements all remain in our own half, that we court trauma.

Why the devil we sat off after the interval is beyond me. Was this at the direction of the manager? Or further suggestion of an issue with mentality? Regardless, we still carved out further gilt edged chances to make the score-line more comfortable. And this is becoming another problem. Profligacy.

We are finding trouble finishing the countless opportunities we create. I counted 3 for AC and 10 for us. Against superior opposition we will be made to pay if this lack of end product continues.  On the other hand, we have shored up defensively. Even after sitting back, inviting pressure, and to some degree late on looking liable to list under the waves of AC pressure heading towards our goal, they scored a wonder strike out of nothing, and created just two other decent chances. Neto made one serious save from Fucka, one comfortable block, other than which was far from busy. I will err on the side of hope and positivity and assert that sooner or later, we are going to give an opponent a brutal hiding…

Still much work to be done, yet I am mightily impressed and overjoyed to be regaining enjoyment and excitement from watching Juve play. Such wondrous sensations have been missing for too long.

Asamoah deserves to retain his starting berth. As does every other player on the field, perhaps other than Barzagli, who I am not keen on as a RB. He is a CB. One of the best in the business when match sharp. It will be interesting to see how much Allegri rotates over the coming weeks. Other than the Inter tie, we have plenty of opportunity to bed in to the new system, grind off the rustiness and move towards becoming a winning machine which not just racks up the goals but entertains.

I am unsure how suited Marchisio is to this system. The Khedira/Pjanic axis offers a brilliant combination of guile, physicality, cunning and creativity. I am loathe to see the budding partnership chopped and changed just as it is beginning to bear fruit. However, such is the class of Il Principino, I would be happy to see Pjanic moved into Cuadrado’s new position, Lichsteiner behind him and Claudio take up a central position alongside Khedira. We lose Juan’s searing pace which is a weapon against any side, and gain Pjanic’s world class playmaking in the final third. Problem there is that I feel Pjanic works more fluidly when central….I would rather we continue exactly as we are. It is working.

We are moving in the Right direction, but plenty of room for improvement remains.

On another note entirely, it was intriguing to read Sousa’s comments when asked if he would manage Juve.

“Let’s say I try to make the best decisions for my growth, to improve myself first so that I can then improve my players.”

It would not surprise me to learn of informal discussions taking place in the shadows, between not just Allegri and the club in terms of his openness of ambition to manage elsewhere, namely England, but also between former Juventino Sousa and the club. Paulo may have been sounded out as an option, if the job becomes available. Perhaps even this Summer. It is a high pressure job, Max has been managing in Italy for many moons. He is learning English and has been linked to Arsenal, yet who can say who else may be seeking a highly experienced, successful coach. Guardiola may well self destruct at City…If we go far in the Champions League and repeat the domestic double, he may feel its time to cash in his chips, when his stock is high. More on such matters in May!