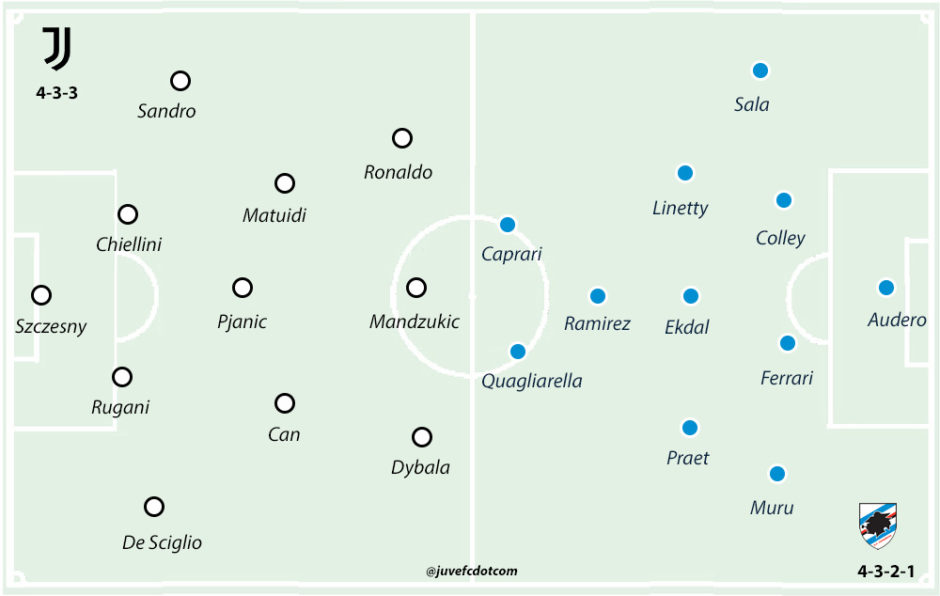 Juventus ended the year in record-breaking fashion but VAR took centre stage in the Bianconeri’s 2-1 victory over Sampdoria.

Mattia Perin: A last minute addition to the team after Szczesny had to pull out. He honestly looked shaky and nervous from the start – That’s part way to be expected as he doesn’t get to play with this defence every week in actual games but at the same time, the mistake at the end that could have cost us the game was really poor. A player like him will only improve for this showing. 5.5/10

Giorgio Chiellini: Juve started pretty strongly and there was a brilliant moment where Chiello galloped down the left, stomping his feet as he went, and almost set up an attack. At the back, he was foot perfect, smothering the Samp possession and relieving pressure. Capitano. 7.5/10

Daniele Rugani: Three clearances, seven clearances, brilliant passing out from the back – He deserved this call up and most importantly, he took the chance to impress. He ensured he was in the right places at the right times and limited the Samp efforts on goal. 7.0/10

Mattia De Sciglio: If we would someway combine his defensive attributes with Joao Cancelo’s attacking range, I’m convinced we’d have the best full-back in the world. His work-rate at the back is exceptional and most importantly, he is consistent. There was a point where we’d worry about him making mistakes and that part of his game has disappeared altogether. Excellent. 7.0/10

Alex Sandro: An excellent all round game – Great work in the final third with his attacking output and support for his teammates and some solid tackles and interceptions at the back. 7.0/10

Emre Can: He started the game so brightly as the whole team did and he had plenty of the ball but the mistake for the penalty was costly and could have been avoided. He lost his composure a little thereafter and there was a sense that the mistake was factoring into his play. 6.0/10

Miralem Pjanic: Dictated the rhythm just fine to start with and I don’t think it’s his fault that the team started to sit back after the opening goal. It would be nice to see him playing with more freedom higher up, creating, instead of dropping deep to collect the ball. 6.5/10

Blaise Matuidi: Only just denied by Audero with a rip-roaring effort from outside the box and I loved his work-rate in the attacking end of the pitch where he linked up well with Dybala and Ronaldo. 6.5/10

Mario Mandzukic: An anonymous game for the big-man but that wasn’t aided by the lack of service and Juve’s proclivity to sit back and defend for period. He was trying to lead the charge without the ball or without players in support. At one stage, he was wide left, looking to cross into the box….the place he should have been. 5.5/10

Cristiano Ronaldo: Well damn – Sometimes you still can’t quite believe that he’s at Juve. Excellent opening goal that Audero probably could have saved. Took the penalty really coolly but he could have had more, had it not been for Superman in the Samp goal. Another excellent game where he (and VAR) saved the day. 8.5/10

Paulo Dybala: Another game, another good creative output but honestly, he is simply wasted laying as an auxiliary midfielder, trying to make things happen when he should be the one finishing. 6.5/10

Federico Bernardeschi: Had time to make an impact but he looked so off the pace and in need of the run out. 5.5/10

Douglas Costa: Some fast-paced sprints into the Samp half of the pitch to relieve the pressure but not enough time to show much else. N/A

The Week in Black & White – Episode 1