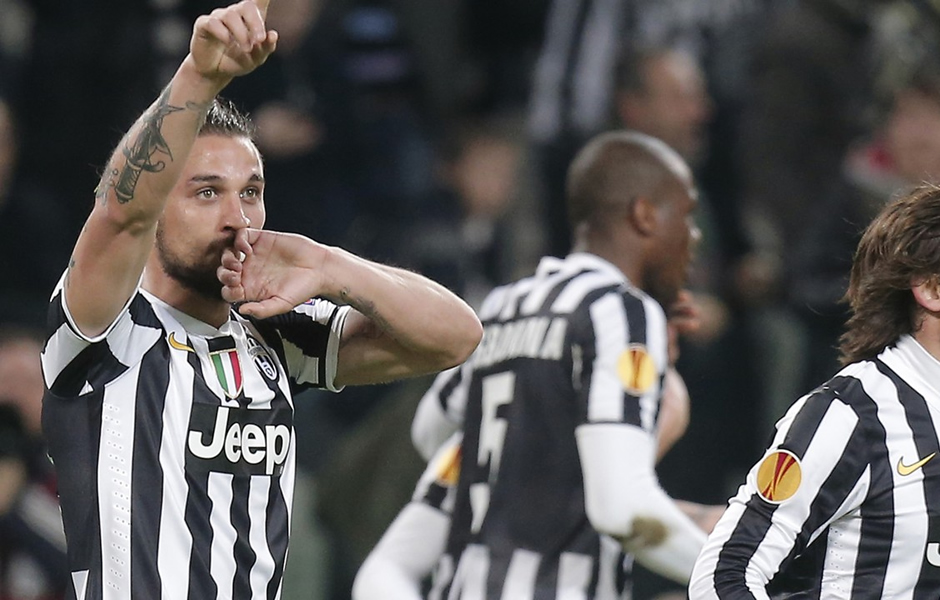 Trabzonspor 0-2 Juventus : Moving On Up to the East Side

Now that was a nice looking Juventus. Really an all around great game for the squad, even players like Mauricio Isla and Sebastian Giovinco had bonafide great games (especially Giovinco.) It was exactly the performance we all wanted to see. Now let’s rate these boys.

Buffon: 6.5. Not much for Gigi to do today, Trabzonspor had only three shots on target. Perhaps we should have started Storari just to give him some more time and let Gigi have a little bit of rest. Although he had lots of resting time today.

Caceres: 6. Wasn’t very impactful on defense, though it’s not as if he played poorly. Still was the least impressive member of the backline. Substituted off in favor of Andrea Barzagli within 60 minutes.

Barzagli (58′): 6. Wasn’t the usual Wall-zagli but wasn’t bad and had a nice half-game to get him ready to return from injury for the Milan match. Had a few clearances, that’s about the highlight of his day.

Bonucci: 7.5. Yes, I am biased, but was he not our best CB today? Almost flawless while defending, and we saw the return of Bonucci the regista. I feel as if he hasn’t been able to play as many long passes this season as he usually has, so it was nice to see that today. That said, the reduction in Bonucci long balls could just be a result of the Juve offense operating better this season.

Ogbonna: 7. A similar performance to that of Bonucci, which is a good thing. Had a few touches in attack too.

Isla: 7. Yes you read that write, I just gave Mauricio Isla a 7 in a match rating. This was maybe his best ever match with Juventus. His crossing wasn’t ideal but Isla was consistently getting into space on that right flank and really created some nice chances, usually when the chance went south it was not due to Isla but due to other players, so that reflects pretty well on him.

Marchisio: 7. I love Marchisio as a regista. He has impressed me each time he has played in the role and today is another example. On Twitter I predicted that next season we would be arguing over whether to start an aging Pirlo or Marchisio as a regista for some games, I stand by that prediction. It’s a bit bold, but I think Marchisio is only going to improve in the regista role.

Pirlo (72′): No rating. It would be an insult to Pirlo to rate him off of his performance today. He was on for about 20 minutes but didn’t do much, and didn’t need to do much.

Pogba: 6.5. Kid played 37 minutes and he almost scored, forcing Trabzonspor’s keeper to make a save. Was always nice in all other areas of play. Probably would have scored had he played the full game or at least most of it.

Padoin (37′): 6. A perfectly acceptable performance from Padoin. I find that he is usually pretty good when defending against other midfielders, but his attacking play is lacking compared to our starters. Today though he was pretty good going forward and even had a shot on goal.

Vidal: 7. The force is strong with this one. Of course Vidal scored, that’s statistically unsurprising for Antonio Conte’s Juve. Otherwise had a very Vidal match, which means he was good. Vidal basically poops out “7” ratings so today was no big deal.

Osvaldo: 7. Another solid game from Osvaldo, and another goal. He now has two more goals in European competitions this year than Carlos Tevez. The oddest thing is that Osvaldo didn’t have that many touches relative to other players, but he created just as much with those touches.

Giovinco: 8.5. The undisputed man of the match. What a game for little Seba today. Maybe it was the weak opposition, or perhaps Osvaldo-Giovinco is a very good partnership. Either way, Giovinco was amazing today. He didn’t score, but recorded an assist and was generally doing whatever he wanted to do with the ball. Easily his best performance with Juve since he returned from Parma. Hopefully he keeps this up.

Today’s win was a nice re-assurance of what we know: Juventus are a very strong side. It also helped validate Conte’s rotation policy, as we have now won 4-0 on aggregate using various approximations of our “B” squad. Now all eyes turn to the match against A.C. Milan on Sunday. Stayed posted to JuveFC.com for our preview and other pieces in the buildup to the match.

Preview: Trabzonspor vs Juventus – The Old Lady Returns to Turkey