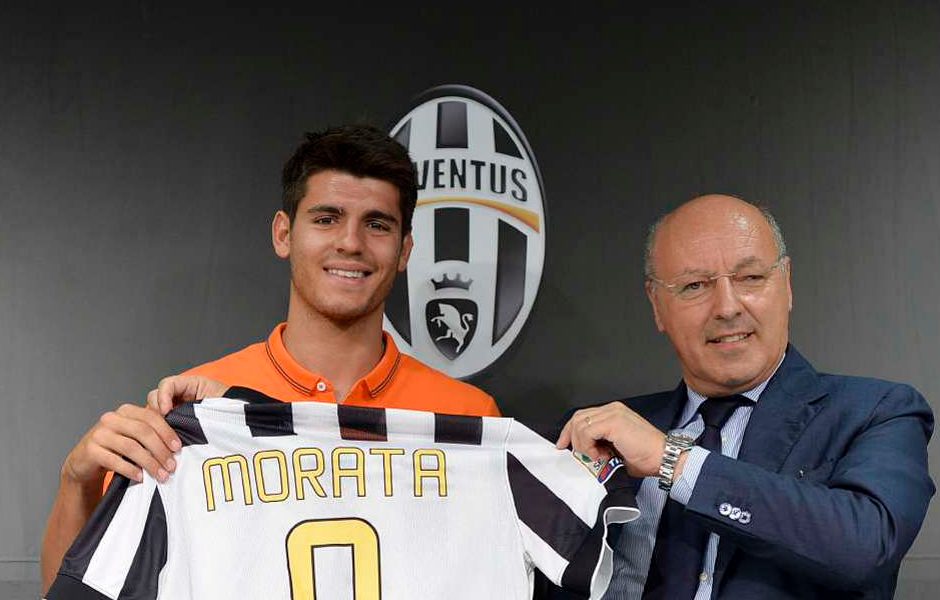 We are coming to an end of a summer that was certainly filled with mercato madness to say the least. From a wild World Cup to Antonio Conte’s departure to the arrival of Max Allegri, there has certainly been no shortage of heartbreaks and confusion. Among the slew of feelings this summer has given us Juventini, Beppe Marotta was put to work and delivered in an interesting way.

While Marotta didn’t bring in Alexis Sanchez like many wanted before the World Cup after he openly admitted to his interest in playing for the Bianconeri, “San Beppe” has certainly offloaded the deadweight and replaced it with quality. With Vucinic, Quagliarella, and Peluso gone, there was certainly room for improvement. In their place are the new signings: Frenchman, Kingsley Coman, Spaniards Alvaro Morata and Carlos Blanco Moreno, Argentine Roberto Pereyra, and Italians Stefano Sturaro and Romulo.

The first new name mentioned is 17 year old winger/attacking midfielder, Kingsley Coman. The Paris-born man will certainly add a great deal of pace and attacking flair, which may deem essential to the success of 6”5’ Fernando Llorente. After getting the player on a free-transfer and certainly upsetting the management and the fans over at PSG, Coman was initially supposed to play with the Primavera. The mentality of the Juve management had completely changed regarding this decision after just a couple of days when his incredible work ethic, attitude, and talent was enough to not only convince the new Mister, Massimiliano Allegri, but also to receive the famous number 11 shirt. Giving Coman the number 11 is certainly a huge endorsement as it’s almost unanimously most notable bearer is in the Juve staff, Pavel Nedved. It was clear Coman caught Juve’s eye before this summer after the Frenchman had scored on Juve’s Primavera team in the Next Gen Tournament last year. Marotta and all of us Juventini are hoping that Coman can become the new Paul Pogba, which seems destined to be seen as how well the French seem to do for the Gobbi!

The second name I would like to talk about is Champions League winner, Alvaro Morata. I could write all day about the talent and potential of the 21-year-old former-Madrid striker. Juventini should be especially excited and fascinated by the amount of will and desire Morata showed in choosing Juventus, turning down many other clubs in the process. Conte’s departure did not seem to hinder the Spanish forwards mentality as he expressed his desire to play under Max Allegri.

After starting his career for Real Madrid Castilla, which is the B team, it was not long until he made his mark and joined Real Madrid playing along side some of the best players in the world, such as Cristiano Ronaldo and Di Maria. While he is a very different player than the Spanish goal-scorer we are used to in Fernando Llorente, Morata can learn a lot from him and Tevez, which is incredibly important at his age. Unfortunately, Morata will miss the first couple of games due to a knee injury he picked up very early into preseason.

The next name is one that is very well known in the world of football, and that man is 33-year-old French International, Patrice Evra. The former Monaco and Manchester United Left-Back is a very interesting signing indeed. Perhaps many are skeptical, especially on the high wages he is sitting on, but there is no denying that his experience and leadership is impossible to put a price on. While we already have Kwadwo Asamoah–who is coming off an excellent season as it seems he is finally comfortable in his left-sided role—the African Cup of Nations, or AFCON, falls on this season, meaning Asamoah will be gone for International duty for around a month.

There was much talk of a dire need for a Left Back and Patrice Evra, who started his career in Italy back in 1998 for Marsala and then at Monza in 1999, could be a great fit for Juventus as the French certainly have no shortage of history wearing the black and white. It is also interesting to note that Evra played under Didier Deschamps during his time at Monaco

The experience alone that Evra brings having not only won the Premier League and the UEFA Champions League, but also sporting the captain’s armband at both Manchester United and the French National Team. Tactically, Allegri can use Evra as a Left Wingback in a 3-5-2 or as a Left Back in any 4-man defense. Evra spoke out in an interview that he started his career playing as a Wingback and is comfortable playing either position.

Another squad player that Beppe Marotta found a way to get his hands on is a man that chose the Italian National Team over a shot at the Brazilian one, he is another man who dreamed of Juve, and that player is Rômulo. Ironically enough, Rômulo started his senior career at a club in Brazil called “Juventude”, and no, that is not a spelling error of our great club!

Coming from Fiorentina and playing on loan at newly promoted Hellas Verona, who was eventually bought by the Verona-side, Rômulo managed to score 8 goals in 62 games between the two clubs, which are decent numbers for a player who spent most of his time as a Wingback and a defensive-minded midfielder. Rômulo was just short of making the Azzurri squad this summer when he was after making the 30-man preliminary squad.

Allegri will be able to use Rômulo mainly as a vice-Lichtsteiner in any formation, as he will be one of the most versatile players on the pitch having played practically every position on the field other than Striker, Goalkeeper, and Center Back; we can expect Rômulo to play on either flank of a 3-5-2, as a Central Midfielder in a 4-3-3 or as a Fullback in any 4-man defense.

One of my personal favorite signings this summer is a man who had been linked to The Old Lady for quite some time, Argentinian winger, Roberto Pereyra. The 23-year-old winger/attacking midfielder stands at an impressive 6”0’, so he is certainly no little Apache, like Carlitos Tevez. Having come from Udinese like many other Juventus players of the past, Pereyra has an interesting skill set that could rip defenses apart.

Pereyra was actually a player that Antonio Conte had personally requested, mainly due to his Marchisio-esque work ethic. Much like Coman, Pereyra can come off of the bench and bring electricity to the attack, something that the team lacked last season, as they were perhaps a bit predictable in the Champions League.

The ex-River Plate and Udinese man can be used on either flank in a 3-5-2 as a more offensive option, or as a CAM in the 3-5-2 along with playing in his most comfortable position as a winger in a 4-3-3. Having options like Pereyra will help Allegri greatly when it comes to squad rotation and late substitutions.

While we may not have gotten the World-Class winger or striker many Juventini dreamed of, myself being one of them, one thing Marotta and crew did focus on was building for the future and signing quality young players and selling Mirko and Quagliarella in the process.

One of Marotta’s many smart purchases regarding youth, after having signed and made profit from Simone Zaza (who has a buyback clause) and Ciro Immobile and having Manolo Gabbiadini and Domenico Berardi co-owned, “San Beppe” has managed to sign promising midfielder, Stefano Sturaro from Genoa.

There is no denying that at the moment Sturaro is simply raw talent and still has much to prove before wearing Bianconero, but Paratici and Marotta certainly have an eye for youth after signing half of both Zaza and Berardi last season who scored a combined 25 goals at Sassuolo last season.

With an aging core, Sturaro could be one of the many young options for Juventus in the future as his most comfortable position is as a Central Midfielder in practically any formation.

Last, but certainly not least, Marotta pulled off another stroke of genius in signing ex-Barcelona defender, Carlos Blanco Moreno. The 18-year-old Spanish Center Back—who was often referred to as “the new Pique”—will play this season with the Juve Primavera. Along with Rugani, Juventus could have a stellar Center Back pairing for the future now that Chiellini has recently turned 30 and Barzagli is 33.

Having snagged the young Spaniard from Barcelona after his contract expired and beating out Real Madrid in the process, it will be exciting to follow Moreno in the Primavera and I would certainly not be surprised if he does well and is on the first team in a couple of years.

Despite not signing the Di Maria’s or the Alexis Sanchez’s of the world, Beppe Marotta definitely had a strong summer and replaced many of the “bidoni” of the team like Peluso, Quagliarella and Vucinic, with quality signings. With new coach, Max Allegri, who is great tactically and especially in the Champions League, the scudetto-winning coach will have a new challenge and new names to deal with for the new season. Forza Juventus!