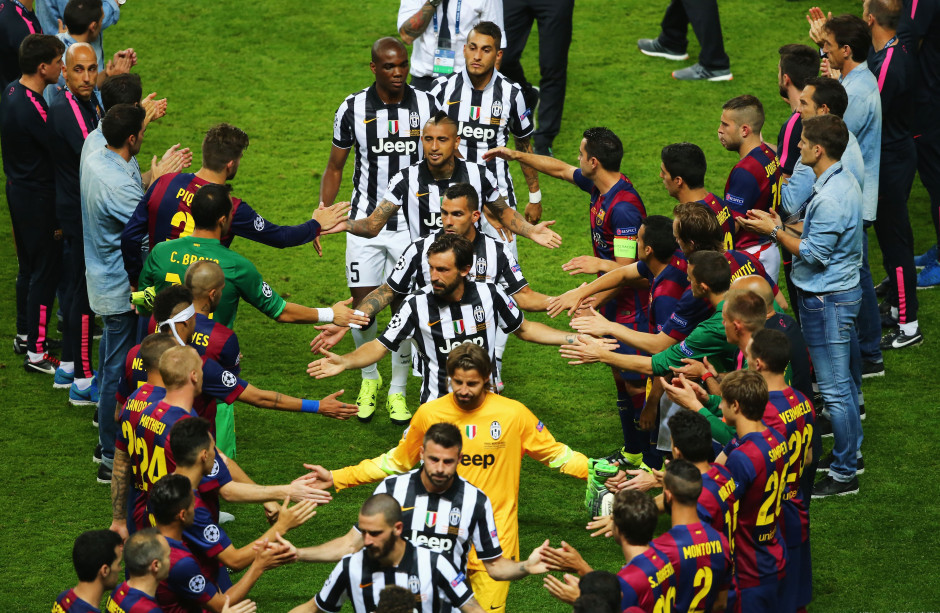 With the 2014/15 season over, we look forward to the summer and highlight some of the moves Juventus should make on the transfer market.

Here’s what would be my ideal transfer market campaign and what I think Juventus should do to continue to improve.

1) Convince Carlos Tevez to stay for one more year, if not longer. In what looks to be an almost complete overhaul of the attack, Juventus need a pillar and veteran leadership. Paulo Dybala and Alvaro Morata are great youngsters and will continue to grow, but you need to have somebody to mentor them and in general some veteran leadership upfront. Tevez has been a great addition since day one, he has still a lot to give to the cause and to Italian/European football; he’s only 31. Moreover, replacing him would be a tough task and a financial bloodbath. The usual strikers linked to Juventus (just spitballing names here) like Radamel Falcao, Robin Van Persie, Mario Mandzukic and Edin Dzeko are all great players, but they would be at their first season in Serie A and there isn’t any guarantee that their transition would be as seamless as Tevez’s one was. They are also very different players from our no. 10, some not very apt to Allegri’s style. The only ones who would assure no-drop off are Edinson Cavani and Zlatan Ibrahimovic, who have already been Serie A stars, but the fee and wages to get the first one are so astronomical that I consider him a pipe dream, while good ol’ Zlatan demands a hefty payday. (Gonzalo Higuain lacks that composure to be a great leader and Napoli would never sell him to Juventus, in case you were wondering.)

2) Keep Arturo Vidal and Paul Pogba. Even though he had an up and down season, mostly because of a rushed surgery in the summer and a tricky recovery process, Arturo is still one of the best all-around midfielders in the world and I look forward to seeing him more as box-to-box midfielder than in the CAM position, which is not the most suited to him. The management seems really committed to retain Pogba and have him as the centerpiece of the next crop of great Juventus players. He has extended his contract midseason, he earns as much as the other top dogs in Turin. Even if his flamboyant agent Mino Raiola likes to open his mouth a lot, Pogba has always been very humble and down-to-earth. The sky is the limit for Paul and I hope his role will be more and more influential as goal scorer too.

3) Buy the second half of Domenico Berardi. If a guy scores 31 goals in his first two seasons in Serie A at age 19 and 20, it means that he has it. He’s an amazing talent that just needs to check his temper at times and cut down the yellow cards. From the technical standpoint, he’s ready. He’s a right winger and Allegri hasn’t turned to 4-3-3 often, but I’m sure he’d work pretty well as right CAM/second striker in the 4-3-2-1 tactic that the coach designated as the ideal one at the beginning of last season. He can spread the floor, take opponents on and shoot from distance with his deadly left foot. He can grow into a second striker as, under Allegri, they tend to start the attack from a wide position. He’s co-owned with Sassuolo and Juventus have a €15M option on the second half until June 10, which would go up to €20M after that date. In any case, the co-ownership will have to be resolved, one way or the other, as that institution will cease to exist. Berardi has never openly said that he wants to make the move this year, but that’s understandable: he has a prominent role at Sassuolo, he’s a star there, they were the team who launched him into professional football and betted on him when he was younger so gratitude plays a factor. He’d play less at Juve and he’s also very young, that’s why he wouldn’t mind stay on loan (or with another formula) one more season, but I’m sure Allegri and the management can easily change his mind.

4) Don’t loan Daniele Rugani. This dude has played every minute and has never been booked and he’s only 20. He’s a finesse defender like Leonardo Bonucci, he’s not blunder prone and just needs to stiffen his man marking, become a little more physical. Andrea Barzagli is 34 and comes off an injury plagued season, Giorgio Chiellini is 30 and has recurrent calf problems: Rugani would be able to grab major minutes thanks to the squad rotation. It’s been rumoured that both Genoa and Sampdoria want him, but Juventus have already redeemed the second half from Empoli for €3.5M and I think it’s a guy they envision being a top-flight defender so it’s definitely not too early to install him into the main roster.

5) Buy two young fullbacks. Stephan Lichtsteiner and Patrice Evra have been very reliable this season, but especially the Swiss right-back has been probably overused. When you have two excellent veteran starters, you can afford to bring in two understudies. There are three interesting right backs in Serie A: Davide Zappacosta, Sime Vrsaljko and Silvan Widmer. Zappacosta needs some polishing in his defensive game as he was transitioning to right winger this year. Sime Vrsaljko has the highest upside, but he’s also a little too frail physically. Widmer is durable and steady and he would be my pick; we have a great relationship with Udinese and maybe he could join delaying the payment (loan with option to buy). However, Juventus would do no wrong with any of these. On the other flank, the injury of Kwadwo Asamoah was a fluke and he won’t have any problem going forward, but I don’t think he’s at his best in that position and could provide better contribution in the midfield. Matteo Darmian is hands down the best left back in Serie A, but the other European top clubs are already battling to have him: Torino’s president Urbano Cairo will sell him to who offers the most and Juventus don’t like auctions. I’ve read good reviews on Ausburg’s Abdul Rahman Baba and I liked Monaco’s Layvin Kurzawa and Olympiacos’ Arthur Masuaku when they played against us. They are all expensive options, but Evra won’t be around for much longer.

6) Add a world class creative midfielder. Roberto Pereyra is perfectly fine and has exceeded expectations this season, however there’s not a real alternative (once again, not a fan of Vidal at CAM) and Juventus could use one more player who can create havok between the lines and feed the strikers, especially should Andrea Pirlo leave. Oscar and Kevin De Bruyne would be good options, I personally adore Isco and I’m sure there few others great players out there who can be targeted as well. I think that this is where Juventus need to make a splash. A super duper playmaker could allow Juve to avoid spending for another big time striker and just roll with Simone Zaza. I see that many are down on him and I get it: there are questions about whether he still has room for improvement in his game. He’s at a good level, but he’s not regarded a superstar in the making like Dybala and Berardi. He’s a physical centre-forward, primary a box specialist, more agile than Fernando Llorente but he’s not able to glide past at will like Alvaro Morata, decent technique. However, if Juventus triggered the €15M buy-back clause, he could surprise most people with his finishing skills and his assertiveness in a team that creates loads of chances. Buying him, if you consider the wages, would still be cheaper than acquiring any other striker.

Let’s be realistic, this is an expensive reinforcement campaign. Juventus will receive a fat check from UEFA for the outstanding performances in the Champions League and the revenues will go up thanks to the new Adidas deal and the improved Jeep sponsorship, but it’s inevitable that there may be some financial casualties.

Fernando Llorente is a great locker room guy and an excellent striker in a system that fits him: I love him, but he has high wages (too high for a fourth/fifth option) and selling him would allow Juve to make a coveted “plusvalenza” since he joined for free. If Juventus do add Zaza and Berardi, letting him go would be logical. If they don’t, you can very well keep him instead of searching for another centre-forward (among the veterans, Van Persie is the one I like the most).

Angelo Ogbonna is solid and he has the potential to be an above average defender if he starts consistently, but I don’t see that happening at Juventus, especially with the focus on grooming Rugani. He’s 27 and was acquired for €13N: once again, probably too expensive to rot on the bench. More importantly, because of how he’s built, he has to play regularly to be at his best, that’s why sometimes we have seen subpar performances from him.

I doubt Juventus will trigger the €8M option to buy on Romulo, who had an awful season because of sports hernia and anyway isn’t a real right-back. He’s a natural RWB, but I think we’ll shift further away from 3-5-2, which will likely be used only as “closing” scheme, in the final minutes of games where we have to defend for dear life. He’s passable as midfielder, but we are stacked there. Martin Caceres is more versatile and a fiery defender: he could be a starter anywhere, but unfortunately he’s hurt all the time. Cashing in on him wouldn’t be a dumb move (if two fullbacks and Rugani are added). Kingsley Coman will most certainly be loaned.

Juventus shouldn’t act crazy if Andrea Pirlo decides to leave. I don’t know if Sami Khedira can play as deep-lying midfielder, Allegri will decide what’s best for the team. Claudio Marchisio has been viable there and Stefano Sturaro can cover that role for sure. Of course they have different characteristics, but that’s probably a dying position and it’s really hard, if not impossible, to find somebody with the same passing ability and vision of the Maestro. Khedira is a good enough replacement: a World Champion, top class midfield when fit. In the dreaded event of Vidal or Pogba leaving, I wouldn’t go for a pricey replacement (like Axel Witsel, who’s certainly an exciting player, Radja Nainggolan or Allan), but I’d simply rely on Asamoah (he’s a brute force) and buy a young gun. I’m a big fan of Parma’s Josè Mauri, who’s a Sturaro with three year less: a defense-first midfielder who’s starting to create his own offensive game. With Pogba/Vidal, Marchisio, Pirlo, Khedira, Asamoah and Sturaro ahead of him, he would have no pressure and time to mature.

It might be the right summer to nab some youngsters at cheap fees and stash them. Godfred Donsah has been linked to Juventus and he’s has high ceiling even if he’s not ready for the main roster like Mauri, Marcello Trotta or Andrea Belotti could be the next Zaza/Gabbiadini and it might be right time to steal Simone Scuffet at a discount price. Basel’s Breel Embolo is very intriguing, but the big investment that is being reported would mean that he’s a lock for making the squad and I don’t know about that.

To sum things up, here’s what I hope the roster will look like come August.