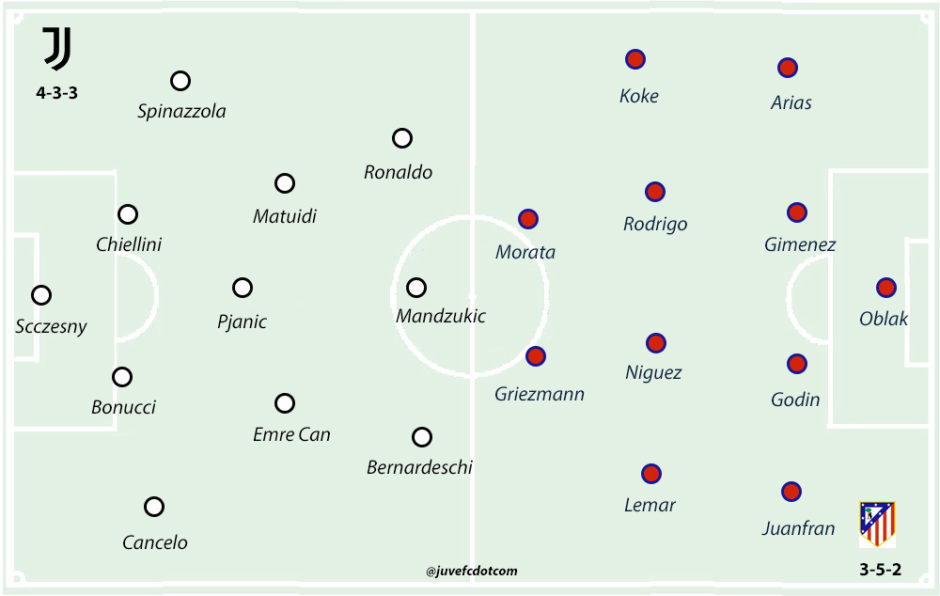 Juventus turned in their best performance of their season to date with a rousing 3-0 victory over Atletico Madrid in the Champions League.

Tek: Did he have a save to make? I can’t recall him having to do anything other than shout at his defenders and organise the back line, which he managed with ease. It’s remarkable that in a game of this magnitude and importance, he barely had to touch the ball. It seems ridiculous to even give him a rating, such was the level of Juve’s dominance. N/A

Leonardo Bonucci: The biggest issue with Leo has been the obvious and apparent drop-off in his defensive duties since his return from Milan last summer. That said, he was in command at the back to the extent that he was able to dictate from deep with consummate ease and assurance. He had a momentary lapse in a one-on-one with Alvaro Morata, but that can be forgiven, such was his performance overall. 7.5/10

Giorgio Chiellini: When people speak of leading by example, this is what they mean. He was at his absolute best, putting to use the dark arts of his defensive schooling over the years, drawing fouls, inviting tackles at opportune moments, and far more importantly, he was trying to lead by example in the Atletico end of the pitch. Could have had a goal of his own as well as an assist. A titan. 8.0/10

Leonardo Spinazzola: Without wishing to gush, it’s important to remember that Leo bided his time and refused opportunities to play elsewhere, in favour of taking his chances at Juve. I have yet to see him give anything less than an above average game, and last night, he gave everything. His overlapping runs with Cristiano, his delivery into the box, the passing and tackling, the direct nature of his runs into the Atleti half. Utterly exceptional. 8.5/10

Joao Cancelo: Excellent passing that was evident in the stats as he had four key passes on the night, but his work rate only improved as the game developed and he looked more confident as the game reached it’s conclusion. Great delivery on the crosses as Allegri’s game plan seemed evident as things developed: get crosses into the box for Cristiano and Mario. This paid off as the Portuguese full-back had an assist to his name by the end of the night and a superb showing overall. 7.5/10

Emre Can: It’s all too easy to typify a players performance by saying ‘He covered every blade of grass on the pitch’ but in the case of Emre Can, I think it might be true. He delivered a ‘strong-arm’ type of display where he outmuscled the Atleti mifielders, forced the tempo, played great passes and even had the tenacity to sit at the right of defence and shield the goal. His BEST Juve performance to date in a game where it mattered most. 8.5/10

Miralem Pjanic: Kept Juve ticking, in the literal sense of the word. He sprayed the ball to the left and right to keep stretching Atleti and it seemed only a matter of time before one of his passes was going to pay off. A great night and a great showing. 7.5/10

Blaise Matuidi: All the things that I normally criticise him for, seemed to come good in this game. His work rate was excellent and he tackled and harried the Atleti midfield and attack until they were clearly exhausted. His drive kept Juve pushing in the right direction and he was an understated hero on the night  7.5/10

Federico Bernardeschi: Wow. Can I leave it at that? Berna has battled with injuries and dips in form, but it was a huge sign of confidence in his abilities that Max opted to play him. And it paid off in every way. He drifted from flank to flank, kept possession so well to the point where Atleti ultimately gave away a penalty just to steal the ball away – He never stopped running and working to press their defence and he even managed an assist for Ronaldo. Exceptional in every way. 8.5/10

Mario Mandzukic: A really poor night by his standards but he deserves some praise for working so tirelessly in the box and occupying the Atleti defence. Really needed to be more decisive when he had the ball but he looked to be struggling with injury. 6.0/10

Cristiano Ronaldo: The first evert top rating i have deemed worthy to give a player, and boy did he deserve it. From the early warm with the team where he shouted encouragement to the opening goal which he took so sweetly to the second where he once again showed his prowess in the air. He was the one in the tunnel, shouting and encouraging his teammates and he stepped up to take the penalty with the weight of the team on his shoulders. PERFECTION. 10/10

Paulo Dybala: Didn’t get a goal, but his dynamism and energy kept Atleti in their own half as he continued to be a threat for Juve. 6.5/10

Moise Kean: Credit to him that he managed to craft a chance out of nothing and was unlucky not to seal the tie. He has so much raw talent it’s exciting to see him, even in a cameo. N/A