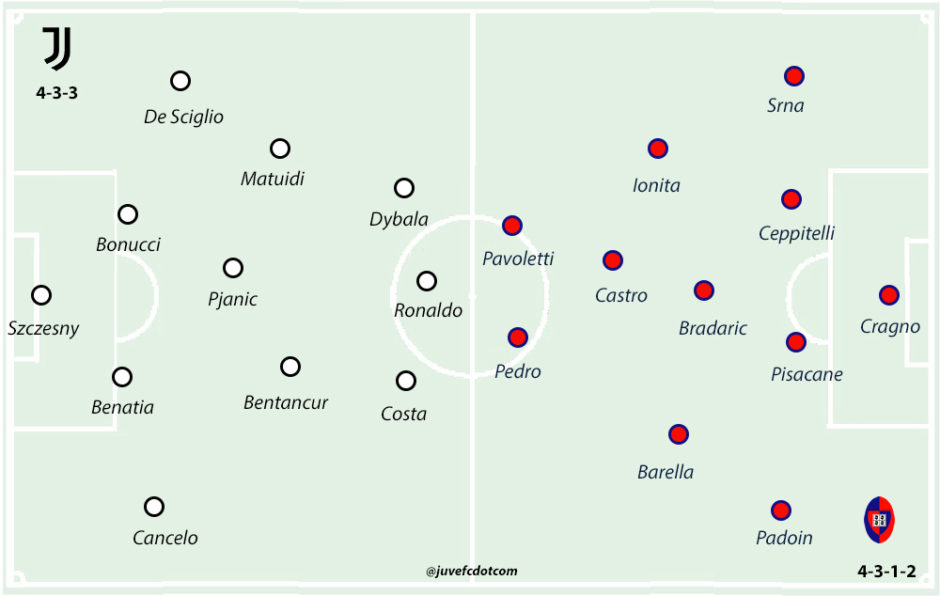 Paulo Dybala scored his second goal as Juventus captain as the Bianconeri laboured but emerged eventual 3-1 winners against Cagliari.

Wojciech Szczęsny: Blindsided by Cancelo for the Cagliari equaliser but the save on Pavoletti was pure instinct and a superb stop from a keeper growing into his No.1 role. 7.0/10

Leonardo Bonucci: Another game where his performance was just about ok – His distribution from the back can’t be faulted, but his defensive displays seem to alternate between brilliant and moderate. 6.0/10

Medhi Benatia: Has a habit of shoving people in the back and then crying wolf when he’s called on it. Other than that, he was solid, even though there was a partial uproar on a potential handball call from people that clearly don’t understand the game. Five clearances, once vital one that would have alsmot certainly led to a goal. Much better. 6.5/10

Mattia De Sciglio: Another game where his delivery might have lacked and he offered very little in the attacking third of the pitch, but his defensive work was sound and he rarely put a foot wrong at the back. 6.0/10

Joao Cancelo: Had some great dribbles down the flank, made three good tackles and an interception and proved reliable, even if there were some moments where his defensive work looked a little shaky. 6.5/10

Rodrigo Bentancur: A very tidy performance from the youngster, setting up Dybala’s goal and playing a key passing role in the centre. Three strong tackles and six interceptions across the field show the boy is improving for playing time and while he has a way to go, he is coming on for the experience. 7.0/10

Miralem Pjanic: A little anonymous at times but this may be down to an injury as he was replaced late in the game as a precaution. 6.0/10

Blaise Matuidi: Hard-working as ever, industrious and plenty of energy on show but still lacks that incisiveness in the attacking end and needs to be a little calmer when in possession in key positions. 6.0/10

Douglas Costa: Looked more like his old self with some of the spectacular crosses he delivered. Played an important part in Juve’s second goal where he forced a mistake that led to an own-goal. Had the pace and the beating of Padoin all night and deserves high praise for a return to form.  7.0/10

Cristiano Ronaldo: A tireless night for the Portuguese wonder – Had effort after effort on goal and was unlucky to hit the woodwork with a good solo effort. Provided a vital and unselfish role in settling things by passing to Cuadrado to finish the game. Excellent. 7.5/10

Paulo Dybala: An excellent night for the youngster who led by example. Scored his second Juve goal as captain and took it upon himself to keep the team moving forward. 7.0/10

Alex Sandro: Didn’t really have much of an impact in the final 20 mins but did what was asked of him without fuss. 5.5/10

Andrea Barzagli: Came on late in the game to keep the scoreline intact. N/A

Juan Cuadrado: Settled the game with some excellent work where he stole the ball back outside his own box then sprinted the length of the pitch to be in the right position to finish. A really solid display and worthy of praise. 7.0/10