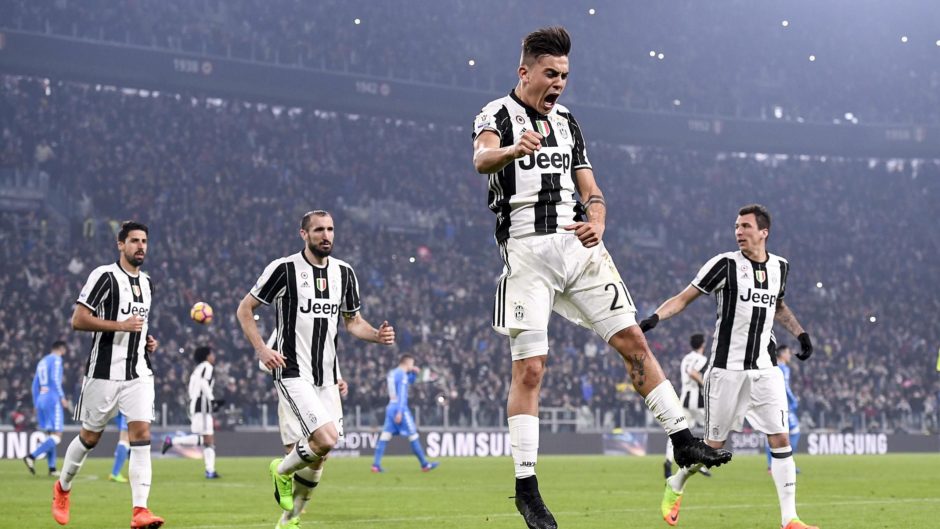 Neto – Other than the goal conceded, for which he had no chance, the Brazilian had not one proper save to make the entire game. Comfortable and impressive with his decision making and handling. 6.5

Chiellini – He loves these rough encounters, and as the temperature rises the warrior within emerges. Giorgio was a centurion, winning countless headers and barely missing a step. Also weighed in with a smart (or brave!) assist for Gonzalo’s goal. 7.5

Barzagli – The old timer proved surprisingly more comfortable when we moved to a back four in the second half, and whilst I am not keen on him playing on the flank his pace remains astounding for a man of his years. 6.5

Bonucci – Back to his finest both with his passing and indomitable defensive power. 7

Asamoah – Fought hard and generally fair! And almost did enough to shut out that crafty little fiend Callejon. 6.5

Lichsteiner – Could have done better with the rebound which was well saved by Reina…other than which held his own…but is no RM. 6.5

Khedira – Somewhat muddled and absent in the first half yet grew in stature as the game progressed. 6

Pjanic – Went about his business with calmness under pressure and stuck to Insigne for the second period which greatly helped our cause. Is showing he can do more than solely make the play from deep and produce beautiful set piece deliveries. 6.5

Mandzukic – Phenomenal. Returned to his more recently common LM role in the 2nd period, Mario became monstrous, both with the ball at his feet and his hustling. His stamina and determination was top quality. Unlucky not to score with his well saved header and snapshot. 8 Dybala – He really must stop this terrible habit of rolling around when fouled, for it bothers the referee and bothers me. Already looks like he is playing in Spain!hohoho! Great running, brilliant work from the spot and to set up Cuadrado for the foul which led to his second. 8

Higuain – Took his goal very well indeed from an acute angle, threatened with another strike within the box yet poked it wide when he should have taken it on his left. 7

Cuadrado – Yet again Juan provided a sterling performance. Winning the penalty with great pace and putting several great balls into the box. Our fortunes changed when he entered the fray as he stretched Napoli terribly and found some great positions. 7

Allegri changed the system for this one, and the 3-4-3 failed to achieve much in the first half as we ceded possession to the visitors. Whilst they had plenty of the ball, they only created one decent chance which was taken. In the same period we created 5-6 decent chances, but spurned them all.

Lichsteiner did not look comfortable as a RM, Mandzukic was playing too centrally with Asamoah the man to make the width on the left. It wasn’t awful, but neither was it easy on the eye. Yet the fact remains, we still created far more presentable opportunities to score than Napoli.

Thankfully, Allegri dispensed with his experiment and returned to the 4-2-3-1 for the second half which has served us so splendidly since the Florence horror-show. We flew out the blocks like a different side entirely. Immediately won the penalty, and continued to push and dominate and create chances until the final whistle. With Sarri forced to take off Hamsik for he had nowhere to play and was not getting on the ball.

As for the penalties, which Napoli of course – as perennial Juve hating, whinging Partenopei – blame for the defeat…This is despite my count of 10 chances for juve, 1 for Napoli. Play pretty on the ball as much as you please, but if you cannot forge and convert meaningful chances, you don’t win football matches. That was the difference, not the ref, who I thought was more poor for us than the visitors.

No doubt whatsoever, Koulibaly clearly stood on Dybala’s toe as he burst through on goal.

Yes yes! Reina got a slight touch on the ball, mili-seconds before he took Juan out horridly. Had he not cleaned him up, sending him flying over his body, the Colombian would assuredly have reached the loose ball and probably scored. Had Reina got a very obvious push away on the ball, sending the ball to safety, and avoided taking Cuadrado out, it might be more of a 50/50 call, but this was not the case. He barely affected the path or pace of the ball. He took the player out. Had he not taken the player out with an obvious foul the player would have had an open goal. Think of this situation outside the box – A defender gets a slight touch on the ball then goes through the opponent with his tackling foot in one motion, barely affecting the path of the ball and completely upending the opponent. It is a foul. Too many people seem to focus when it suits on ‘he touched the ball first!’ yet if this was the law of the game, you would have players going in full blooded for every single 50/50 ball. Which is not the case, as they would be booked or sent off.

It is instructive of both clubs to consider the way they deal with defeat. When we lost to Fiorentina, Allegri described the game as ‘a setback’ and called for his players to ‘fight’. When Napoli lose they blame the officials. When Roma cant catch us they blame our unfair advantage from receiving assistance from the officials. It is disgusting and unheard of in the other top leagues. This lack of dignity, of respect and with Napoli it seems time after time a reflection of the chairman; a petulant rich man used to always getting his own way. A child throwing his toys out the pram…

This behaviour sours the reputation of not Juve, but Serie A as a whole, and does nothing positive to promote what is a recovering league with some brilliant teams.

Dybala, Cuadrado and Lichsteiner are the only players in our squad who ever make me cringe. And it is always due to their theatrics. Other than which, the club from top to bottom present themselves in the right manner. With dignity, respect and professionalism.

The fixture list is working out perfectly, for we have bedded in a new system, which is bringing marvellous results and exciting performances and we are finding  just the kind of games required to help us blossom further, find the fighting spirit any top team needs to succeed at the elite level. A team can reach a point where they appear to be coasting but unless they are tested, unless they are pushed, they do not improve further. We remain a work in progress, yet are very much on the right path.

This was a fighting performance. Against a very good side. Yet their key is Insigne and Sarri chose to give Milik his first start for many months which suggested to me he was focusing more on the Roma game come the weekend. He also made the team more defensive when we drew level. And even when they did manage to put some good balls into the box late on, they had just one player in attendance! In short, Sarri was scared.

Napoli offered very little threat and were rightfully beaten. Just a shame that partly deflected pass fell perfectly for Callejon to preclude the clean sheet. Regardless, we are in a strong position for the second leg, looking fine in the league and perfectly poised to progress to the quarter finals of the champions league. Many reasons to be cheerful.