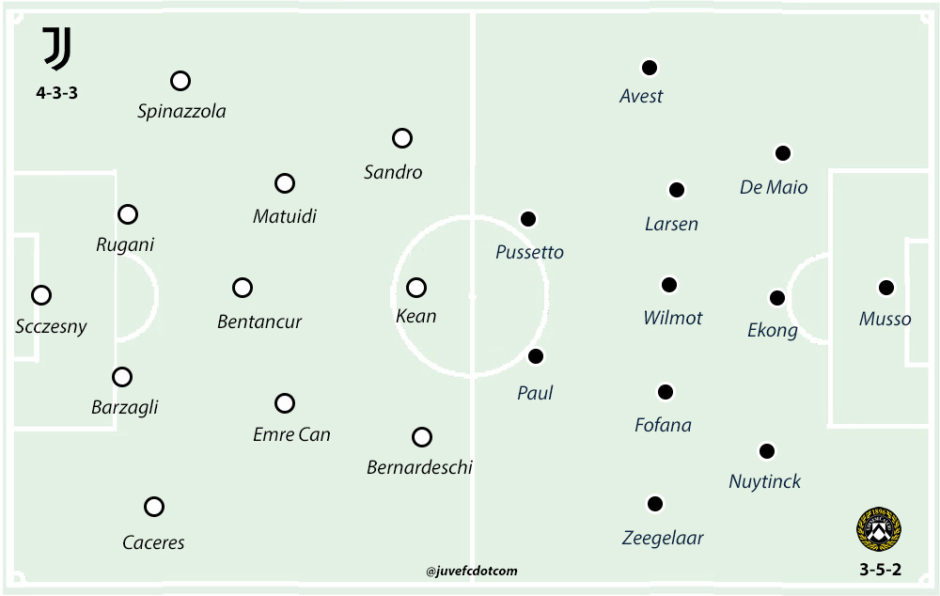 Max Allegri fielded a Juventus ‘B’ team who readily ran Udinese ragged in a one-sided 4-1 victory with Moise Kean stealing the show.

Tek: A spectator for 90 minutes. He made one tame save and the only other action of the night was to collect the ball from the net. He could easily have been in the stands the whole night. 6.0/10

Daniele Rugani: Barely pressured but the team seemed to work better after the change in formation and he was able to control things from deep with some good passes. Three clearances, one interception but not a tackle to be made as Juve looked so dominant. 6.0/10

Martin Caceres: Made a daft error to let Lasagna through for an Udinese consolation goal, but he was generally decent otherwise with a brace of tackles, clearances and interceptions. 6.0/10

Leonardo Spinazzola: Was penciled in to start on the left but switched flanks as the formation changed and looked a constant threat down the right, pushing Zeegelaar back and proving a threat in the Udinese end. A good night for him as he looked sharp throughout and should be in contention for more starting places. 6.5/10

Andrea Barzagli: Started well but was injured on the 25 minute mark and ad to unfortunately come off. A real shame as it’s entirely possible we won’t see him again until the end of the season when he calls time on his amazing Juventus career. N/A

Emre Can: A tough tackling performance where he got stuck in the centre of the pitch and kept Udinese pushed back and unable to create anything. Took his penalty well, although Kean should have taken it and was a strong presence throughout the game. 7.0/10

Rodrigo Bentancur: An impressive night for the youngster and perhaps this role is more suited to him – An assist, three key passes, three interceptions and some good passing from the centre. A much improved display from recent outings and perhaps he’s returning to form at the right time. 7.0/10

Blaise Matuidi: An exceptional night for the veteran as he looked to be playing higher up in what looked a 3-4-2-1 with Matuidi constantly getting into the box to threaten the Udinese defence. Had a few wasted chances but finally got a well deserved goal to cap off a strong showing.  7.0/10

Federico Bernardeschi: Frustrating. On the stats alone, he did ok with some dribbles and key passes but on more than one occasion he failed to play the right ball or crumpled in a heap because he held on to the ball too long. Still looks in need of a good run in the team and perhaps switched back to his more favoured role. 6.0/10

Moise Kean: Wow. Every time this young man gets a chance to impress, he duly takes it. His presence is enough to cause defenders problems, he constantly played off the should of the last man, sat in between the centrebacks and gave them no peace. His first goal was clinical, his second even more so as he latched onto a loose pass and provided the perfect toe-poke finish. Won the penalty that should have been his hattrick and single-handedly dismantled the Udinese back-line. And he’s 19. Remarkable. 8.5/10

Alex Sandro: Technically, he didn’t get the assist for the opening goal, but in reality, he did much of the hard work on Kean’s first. He looked so much better for playing higher up the pitch and looking free of his defensive duties as Udinese offered very little down the left. A much better performance. 7.5/10

Paulo Dybala: Played the closing 20 minutes and had a decent run out. N/A

Leonardo Bonucci: Came on early in the game and helped out at the back to ensure Juve were in absolute control.  6.0/10

Hans Nicolussi-Caviglia: A 10 minute cameo for the youngster with the game well and truly over.  N/A